Jon Lester is Struggling Mightily, But the Cubs' Options Are Limited Skip to content 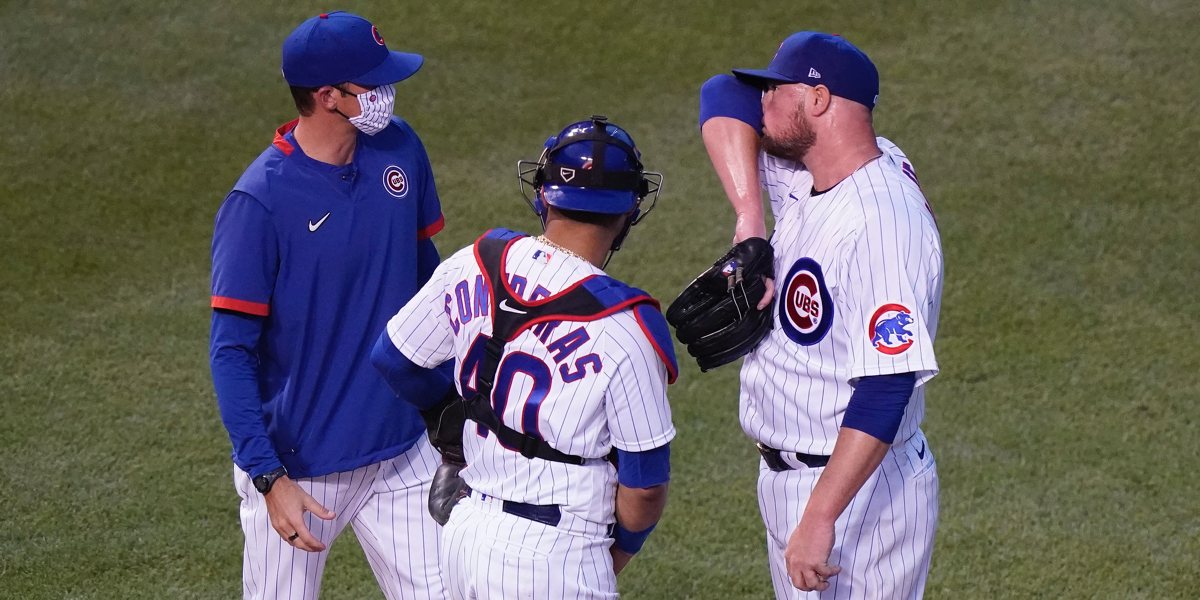 There was some hope – reasonable, I think – that a short season would work out all right for Jon Lester.

Yes, he’s getting long in the tooth as far as MLB starting pitchers go, and yes, we’ve seen the steep declines in velocity and stuff the last few years. But he’s a guy who still locates well, changes speeds and eye level, executes well to a game plan, etc. And if he knew he had only so many bullets he needed to save in a short season? It was a reasonable bet to say he could be a solid 4/5 for the Cubs. Even last year, Lester’s 102 ERA- means he was just about a league average starter – you’d gladly take that at the back of your rotation.

Unfortunately, through eight starts, things haven’t played out that way.

After last night’s struggles, his fourth rough outing in his last five starts, Lester’s ERA stands at 5.80, nearly a run and a half worse than league average, and better than only 14 other NL pitchers who have more than 20 innings pitched. If it weren’t for his first three outings of the year, all very good, Lester’s season numbers would be downright terrifying.

Lester mostly did a decent job keeping the ball down last night, but at this point in his career, “mostly” and “decent” are going to leave him exposed to the risk of aggressive teams blowing him up. He left six pitches middle-middle last night, and the Cardinals put five of them in play, four for hits (including two doubles and a homer). Lester also let an 87mph cutter to Paul Goldschmidt catch too much of the plate for a three-run homer (not all mistakes are middle-middle). Sometimes, just five or six really bad mistakes can be enough to sink you without premium stuff or velocity.

I would never say that Lester sounds “defeated,” but he definitely doesn’t have the same attitude you usually hear from him even in the midst of struggles:

Jon Lester usually takes a step back from a bad start, talks about going through ruts before and rarely sounds like this in the Wrigley interview room: “Obviously, with the shortened season, everything’s magnified even more, so I don’t know where that confidence will come from.”

Jon Lester:
"When your starter every 5 days puts you behind the eight ball, it's hard to come back those days…They did a good job of working at-bats tonight. I did a great job of giving up the lead. When you continually do that, it kind of breaks their spirits as well."

Right now, realistically, there’s nothing the Cubs can do but send Lester out there for his next turn and hope he executes for five innings and the bullpen can be rested and effective from there. Without Jose Quintana or Tyler Chatwood, the Cubs are already into fill-in-starter mode at the back of the rotation, which means Lester is practically operating as the three. That’ll always look like a serious problem when the guy you’ve asked to do it is more of a five.

Even if Adbert Alzolay dominates on Thursday, and even if Jose Quintana is ready to return after that, I’m not sure you can count on Quintana for more than four innings or so when he comes back (he was already showing that he wore down significantly after a couple innings in his two appearances, and now he’s coming back from another injury). I don’t see that version of Quintana replacing Lester in the rotation, especially not if Alec Mills is also still struggling.

That is to say, unless you are ready to boot Lester from the rotation entirely and replace him with a rookie making his debut – like a Brailyn Marquez – then Lester’s going to make starts the rest of the way so long as he’s healthy. Realistically, I don’t see a scenario where the Cubs actually boot Lester from the rotation without near 100% confidence that the guy replacing him is going to be immediately ready to roll, and you just can’t have that with a youngster who has barely even pitched at High-A. You also couldn’t have a ton of confidence in a guy like Tyson Miller or Cory Abbott just yet, either, thanks to the lack of a real minor league season. So, you’re left, again, with the hope that Lester can give you a decent five-inning outing a few times the rest of the way.