Baseball 19 Years Later, Ups and Downs in the Bullpen, Ross Won't Change Lineup, and Other Cubs Bits Skip to content 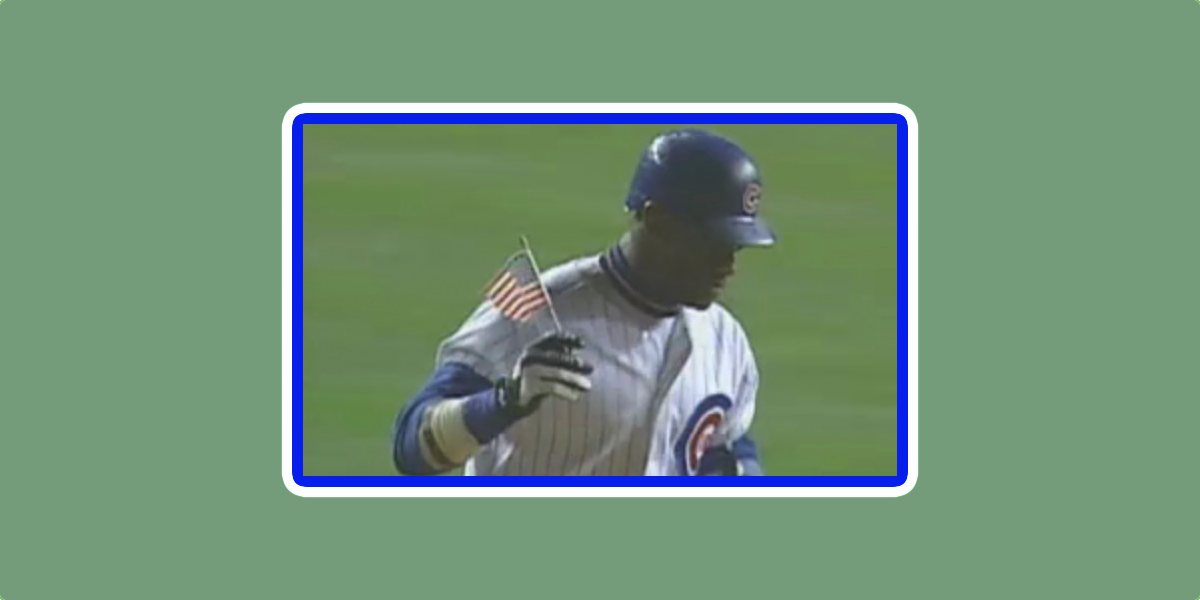 I’m not sure how much good it does us to draw parallels between the current moment and the aftermath of 9/11 simply because today is the anniversary of that awful day. Let this be what it is, and let that be what it was. Today, I’ll remember and honor those whose lives were lost, and the others whose lives were changed forever.

In the Cubs first home game after 9/11, Sammy Sosa ran to right field with an American flag. Then, he and first base coach Billy Williams had another flag ready, so that *when* Sammy homered, they could do this. pic.twitter.com/GlNbhyQm0l

•   The Cubs’ win last night was not only one of the season’s best for a variety of reasons, it also pushed their NL Central lead back up to 3.0 games over the Cardinals, who split their doubleheader against the Tigers. That game included a late comeback by the Tigers, led by former Cub Jeimer Candelario (thanks, man!).

•   Worse for the Cardinals, their current dominant closer Giovanny Gallegos hurt his groin while blowing the game, and is now likely to miss some time. The Cardinals still have to play far more games than there are days left on the calendar, which means the strain on their pitching staff was already going to be significant, even with the seven-inning thing. To lose their best reliever for any amount of time is brutal.

•   Speaking of brutal, Ian Happ struck out another four times last night, bringing his total over the three-game Reds set to a whopping 10. His season strikeout rate has climbed from 23.9% to 27.8% in just those last three games. For now, I won’t say there’s too much to make of it – he’s faced some good strikeout pitchers, and he does have some swing and miss in his game that will probably ebb and flow like this – but obviously he did recently scratch his cornea. He got over it so quickly and homered twice in the next game that (not unlike when Kris Bryant homered right after hurting his wrist) it fell off the radar a bit. But even the tiniest impact to vision could manifest in problems like this. It’s something to watch. For now, though, it’s just three games.

•   The Cubs bullpen was flawless last night with the exception of Dan Winkler, who has seemed to exist perpetually on the bubble of being optioned out. Even with his awful, awful peripherals, he was getting results all year. Skin of his teeth, good plays behind him, strikeouts at just the right time, etc. But the results were there. Thing is, though, the reason we look at peripherals in the first place is to get a better sense of how a guy is actually performing, and how that might inform his future results. So if you are wild as heck, getting very few strikeouts, walking a ton, and not doing anything particularly elite on the contact quality side, well, your .129 BABIP is probably gonna regress at some point. So even if the hits against him looked flukey last night, it’s like, well, yeah, that’s what happens.

•   There’s a reason Winkler’s expected wOBA is so much higher than his actual allowed wOBA, and the difference between his expected and actual ERA is a whopping 1.57, second highest* on the Cubs. I don’t know how much longer he’s gonna stick in the pen with Jose Quintana, Tyler Chatwood, and Andrew Chafin coming at some point. Winkler does have an option remaining.

•   (*The highest spread on the Cubs? Gulp. It’s actually Jeremy Jeffress, who has the 8th largest spread in all of baseball, at 3.05. He’s posted a 1.00 ERA, but based on Ks, BBs, and contact quality, Statcast estimates his ERA should actually be closer to 4.05. The main reason is that the slugging he’s allowed (.140) is 228 points lower than expected, the second biggest spread in baseball. This is perhaps cause for considerable concern when you’re talking about your closer who doesn’t register a lot of strikeouts. For now, he’s getting outs on balls in play, and when he isn’t, they’re just singles. The metrics suggest that wouldn’t last forever. So the actual underlying performance is gonna have to improve a bit (which it might!), or he’s just gonna have to keep getting lucky.)

•   One fun bright spot from going down this expected statistic rabbit hole on the pitching side? The best Cubs pitchers by expected ERA mostly go in the order/range you would think, with Yu Darvish at the top, Kyle Hendricks next, and then the good relievers all grouped together. In that group – 4th overall, following Darvish, Hendricks, and Ryan Tepera – is Duane Underwood, Jr., who rates as very good and very unlucky this  year.

•   Wait, one more. If we lower the threshold to make the list to 40 plate appearances, a new pitcher takes the top spot for the Cubs. I hope you won’t be surprised if you’ve been watching him, because he’s been really impressive lately. He struck out three last night, too. It’s Jason Adam.

•   Bedding, chargers and charging gear, and supplements are among your Deals of the Day at Amazon. #ad

•   David Ross is not going to move Kris Bryant and Javy Báez down in the order, despite the fact that he’s giving the most at bats to the guys who are performing the worst and do not look like they’re close to getting right (Cubs.com): “I keep writing the same order and the same names because I believe in them and their track record. There’s times and thoughts where you want to do something different, but our success is going to be with those guys.” Live by it or die by it, I guess, but it seems like you’re just doing magical thinking at this point. It really didn’t have to be this way.

•   Nico Hoerner’s brilliant baserunning move – scoring from second on Ian Happ’s infield single to the right side – came with a huge assist from the third base coach:

Nico Hoerner says "all the credit" goes to 3B coach Will Venable for the send in the 4th inning. Hoerner scored from second, but didn't know the ball didn't get through the infield until seeing the replay later.

•   You can take some credit, Nico, at least for the excellent slide: