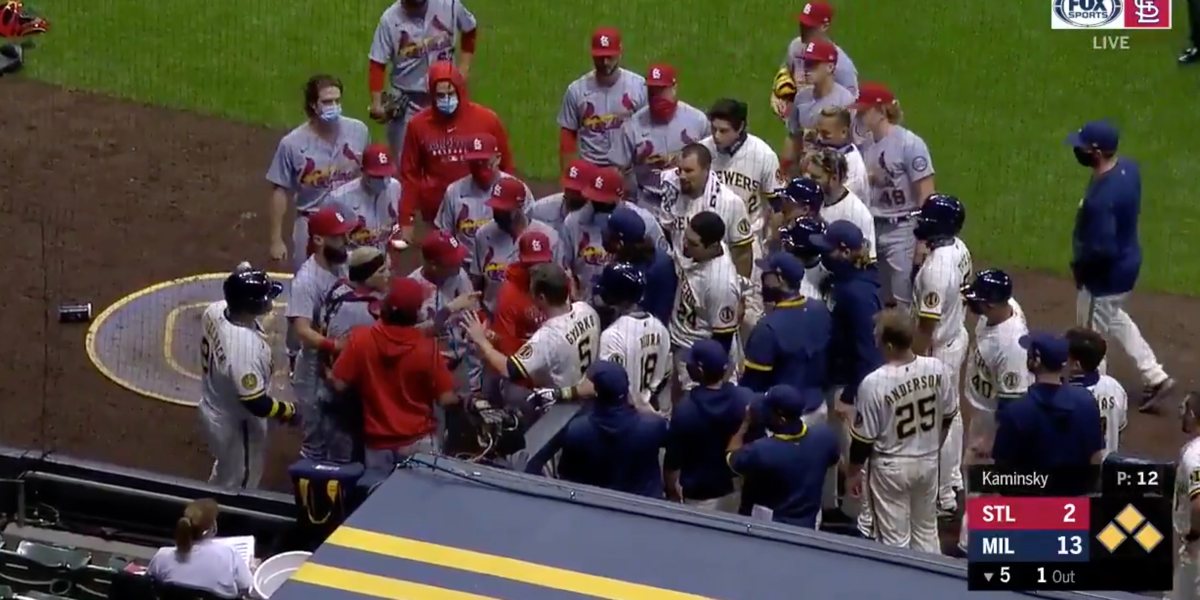 The Brewers are in the process of absolutely drubbing the Cardinals right now (currently 17-2), and that can be the kind of game where tensions run high.

Apparently, words escalated right after Cardinals catcher Yadi Molina was hit behind the plate on a catcher’s interference with Ryan Braun at the plate:

Benches clear in the Cardinals/Brewers game after Yadier Molina was called for catchers interference. Mike Shildt was FIRED UP! pic.twitter.com/fjhNIKn3qz

Mike Shildt walks over to #Brewers dugout. He's leading this, and he's still yelling at them. Even as Maddux tries to separate, Gyorko tries to mediate. Shildt is still talking to Sedar about it. Clearly he heard something from Brewers dugout — and rushed for confrontation.

As we’ve seen and said before – including in Cubs games – you just can’t have these kinds of escalations this season. Yes, the risk of some mass transmission of COVID-19 because of a scrum is low, but there’s no good reason to increase that risk at all, especially between multiple teams. I don’t care how mad Mike Shildt and Yadi Molina were – whatever the Brewers were saying – you just can’t walk over to the other team’s dugout like that. Not right now.

When the Reds bench came at the Cubs, it wound up netting the Reds multiple short suspensions and fines. Will this Brewers-Cardinals scrape lead to the same? Not like either team can afford to go down any players right now, especially the Cardinals, as they’re making up far more games than there are days left in the season.