Kyle Schwarber's Hard-Hitting, Ice-Cold Two Weeks, and Problems on the Inner Half Skip to content 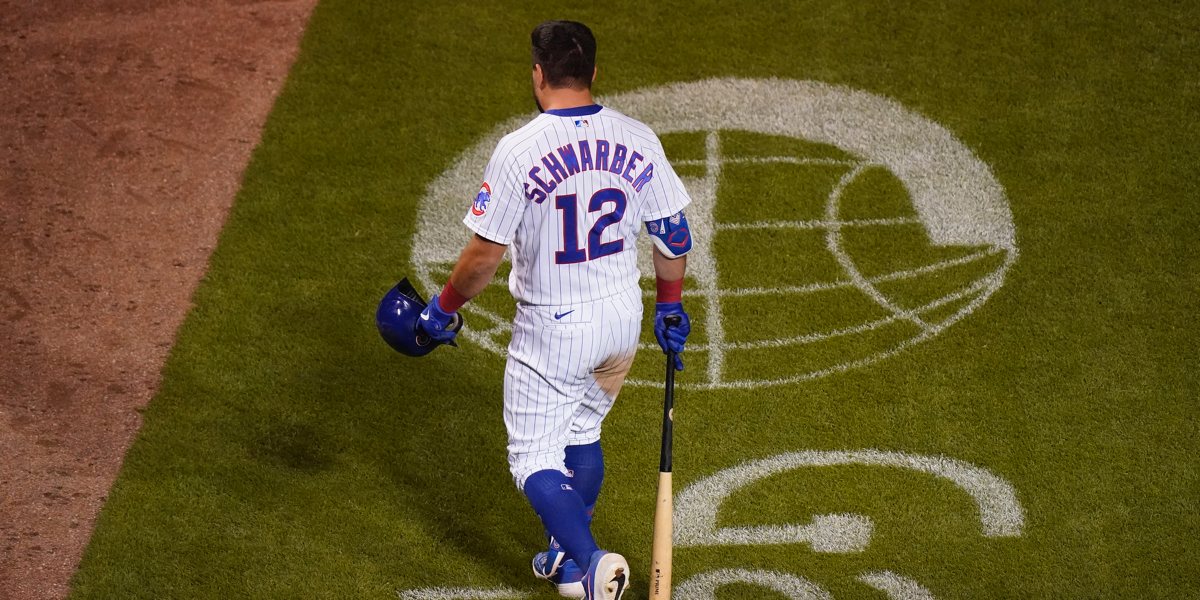 Over the last two weeks, something you probably haven’t noticed: Kyle Schwarber has the second-highest average exit velocity of any Cubs player.

That shocked me. Why? Because – as many of us have noticed and focused on – in that same time span, Schwarber has been the Cubs’ worst offensive performer by a pretty significant margin.

Two singles, and the rest bupkis, in 38 at-bats. He’s walked nine times over the 13-game stretch, so there’s that, but it’s weighted against 14 strikeouts. In a big spot with the bases loaded on Wednesday, he looked overmatched.

So how can we reconcile a guy that’s making so much hard contact with a guy getting no results? With Cameron Maybin performing well since coming over, and a guy like David Bote now tied to the bench, should David Ross begin reconsidering Schwarber as a must-play option on an everyday basis?

I would say no, it’s not time to think about sitting Schwarber, but with a caveat.

The first thing that jumps out to me about Schwarber this season – and also during this slump – is the results not matching the batted ball quality. Schwarber’s BABIP is a career-low .231, and an even worse .083 during those 13 games. Via Statcast, his expected wOBA is 39 points higher than his actual wOBA, though both are also the lowest of his career.

Schwarber’s groundball rate this season is partially to blame. It’s at 49%, way up from his career average of 40.8% and miles away from his 2019 38% number. You want to see some groundballs to the right side changed out for fliers to left-center, no doubt about it. But during this latest slump, Schwarber has recorded a hit on just 1-of-12 groundballs he’s put into play. Even against the shift, that’s kinda extreme.

It’s easy to discount this as all bad luck, to suggest we shouldn’t worry, and move on. And I’ll tell you, I think that should absolutely be part of the analysis. Schwarber’s ability to hit the ball hard should win out and make him a productive player over the long run. We’re a simple hot streak away from career-best numbers, too, and that’s certainly possible.

But, I also see some things in Schwarber’s numbers that I know other teams are seeing, too. This is Schwarber’s xwOBA against right-handed pitcher’s by zone this season. 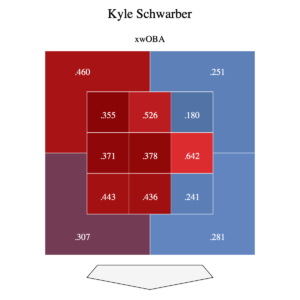 The inner half has simply been a huge problem. Schwarber has been thrown 207 pitches this season on the inner third (or off the plate inside), per Statcast. He has swung at 85 of them. Just 14 times has he put them into play, with five of them resulting in hits.

Opposing teams have yet to disproportionately increase the pitch usage to that side of the plate, but you have to think that adjustment is coming. Can Schwarber improve and make them pay? After all, it’s supposed to be dangerous to throw inner-third on a guy like Schwarber. This will be what David Ross and Anthony Iapoce have to continue to project, particularly against those pitchers that can really spot the ball to those zones. Schwarber, when he’s on, can be such a threat in the middle of this order, and there is evidence to believe that last season’s second-half breakout can become more of a norm. For that to happen, though, he’s going to need to go up a level on inside pitches.