The Cubs won again last night, which means we know their magic number (the combination of their wins and opponents losses needed to clinch) went down, but that’s where things get a little complicated.

You see, although the Reds were the team most closely behind the Cubs in the Central, they weren’t the team against whom the Cubs have largest magic number. That, instead, would be the Cardinals, who were farther from the Cubs in the standings, but have many more games remaining thanks to the time they lost due to their COVID outbreak.

HOWEVER, I’m of the opinion that the Cardinals are toast regardless – thanks largely to that hellacious schedule – so really, I’m mentally thinking about the Cubs “clinching” when their magic number relative to the Reds gets to zero. Even though that’s not actually a clinch. Make sense? No? That’s OK. Everything about this year is nonsense anyway.

The Cardinals swept their doubleheader with the Pirates, so the Cubs magic number relative to them also dropped only one, down to six.

The Cardinals made up a half-game on the Cubs and Reds, and thus, as far as the standings are concerned, they’re now right there with the Reds at 5.5 games behind the Cubs:

The Cardinals still have up to 12 games left to play over the next 10 days. Even if they could manage to win 10 of those games, if the Cubs go merely 4-5 over their final nine, the Cubs clinch. And the Cubs are getting the Pirates for four of those games.

Meanwhile, the Cardinals do have a favorable set of teams the rest of the way (Pirates, Royals, Brewers, Tigers (if necessary)). So maybe I’m getting too optimistic in saying they’re toast, but with a strained roster – including one of their pitchers just having his season ended (Dakota Hudson) – I can’t see them winning more than eight, if they’re fortunate enough to pull even that off. The Cubs just need not to completely fall apart.

You’ll note that I didn’t really mention the Brewers here, and there’s a good reason: since they have to play both the Reds and Cardinals from here, either they’re gonna win a lot of those games and help eliminate those teams (but they’re a game further back), or they’re going to lose those games during the worst-case-scenarios described above. Either way, the Cubs magic number relative to them is just four, and if the Brewers were to actually pull that off, then they’d have made it impossible for the Cubs to fall out of the second place spot in the process. So, it’s kinda like … whatever.

Meanwhile, if you curious about the rest of the NL Playoff Race, look at the mess developing among the second place teams and the Wild Card teams: 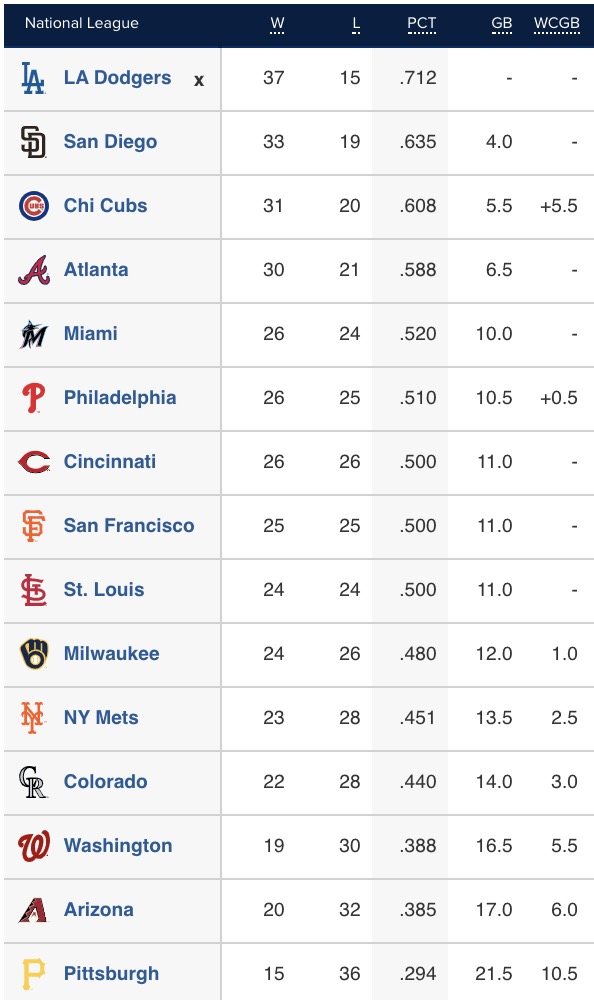 The back end of 10 or 11 or 12 teams bunching up for 8 playoff spots is wild. Now imagine the chaos if half them finished with identical 30-30 records. (There are no tie-break games this year, though – just a series of tiebreakers that would decide everything, which is much less fun.)