The Chicago Cubs did not win last night for the first time in a little while, which means they didn’t move their magic number to clinch the NL Central.

Meanwhile, after getting no-hit for six innings by Mitch Keller, the Cardinals immediately blew up the Pirates bullpen upon his exit, erasing a 4-0 deficit and winning 5-4 (on three hits … thanks, Pirates). Thus, the Cubs also didn’t get an assist in moving their magic number, which stayed at 6.

That said, the White Sox beat the Reds, so the Cubs’ magic number for eliminating the Reds from the Central top spot is down to 3. The Brewers beat the Royals, so the magic number there stayed at 4. (I know it’s really weird to talk about it this way, but because the Cardinals’ schedule is so densely packed in the final week, I think it’s still worth keeping tabs on how close the other teams are to being eliminated for the top spot.) 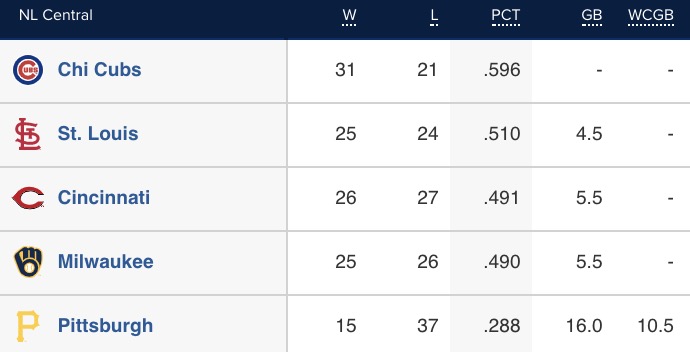 The Cardinals wrap things up with the Pirates today, then they’re off to Kansas City for another winnable series. From there, it’s five against the Brewers in four days, and then a concluding doubleheader against the Tigers, if necessary.

Meanwhile, the Reds and Brewers are finishing things up against the White Sox and Royals, respectively, before facing each other for three.

Also, have you been wondering why the Cubs haven’t at least clinched a Wild Card spot at this point? Well, it’s because it is technically and mathematically possible that they could fall into third place in the NL Central (would basically require Cardinals and Reds winning out, since they both have to play the Brewers), and also fall behind two other Wild Card teams. The Phillies are third in the NL East, and do not play the second place Marlins anymore, so if the Phillies were to go nuts the rest of the way (and the Cubs massively slump), they could pass the Cubs. The Giants are third in the NL West, and although they do play the second place Padres in the final series of the year, the Padres have a sufficiently strong record that even if the Giants swept them, both teams could wind up still having better records than the Cubs.

By my math, the Cubs’ magic number against the Wild Card teams is 4. So if the Cubs go at least 4-4 over the final eight games, they are guaranteed a playoff spot, no matter what else happens. (But, again, realistically, they’re already in.)