Finally, some traction! A Cubs win last night paired with a Cardinals loss, and there was finally some downward movement in the Cubs magic number.

The Cubs magic number to win the DuVision is down to 4:

Good morning to the #Cubs and their magic number to win the NL Central!

The Cardinals lost 4-1 to the Royals – these are the games they basically HAVE to win – and I want to give a special shout to old friend Jorge Soler, who can still beat up on the Cardinals for the Cubs:

Meanwhile, in the series that mostly can’t go bad for the Cubs, the Reds beat the Brewers 6-3, leaving the NL Central standings looking like this at the moment: 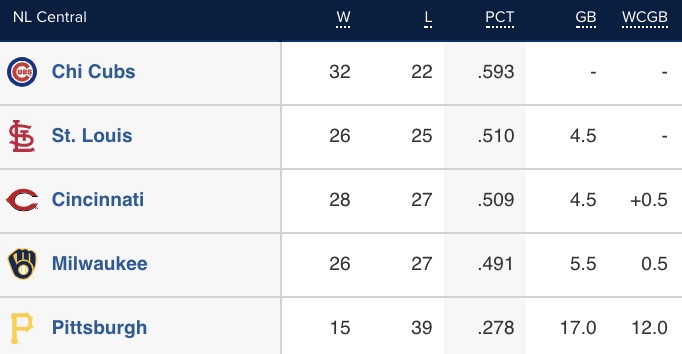 The Cardinals have two more against the Royals this week before their five-game set against the Brewers. Your rooting interest today, in addition to the obvious Cardinals loss, is that the Brewers beat the Reds. Not only do you want that so that each of those two teams knock each other back, but also because it’s best if the Brewers are still in a good postseason position by the time they play that Cardinals series. You want them as hungry as possible.

Of course, if the Cubs can just keep beating the Pirates, and if the Cardinals lose one of these two remaining games against the Royals, the Cubs could have this thing locked up before we even get to the weekend series against the White Sox. Sure would be nice, eh?