The Cubs Edge, Please Load Up on Lefties, Postseason Begins, and Other Cubs Bullets Skip to content 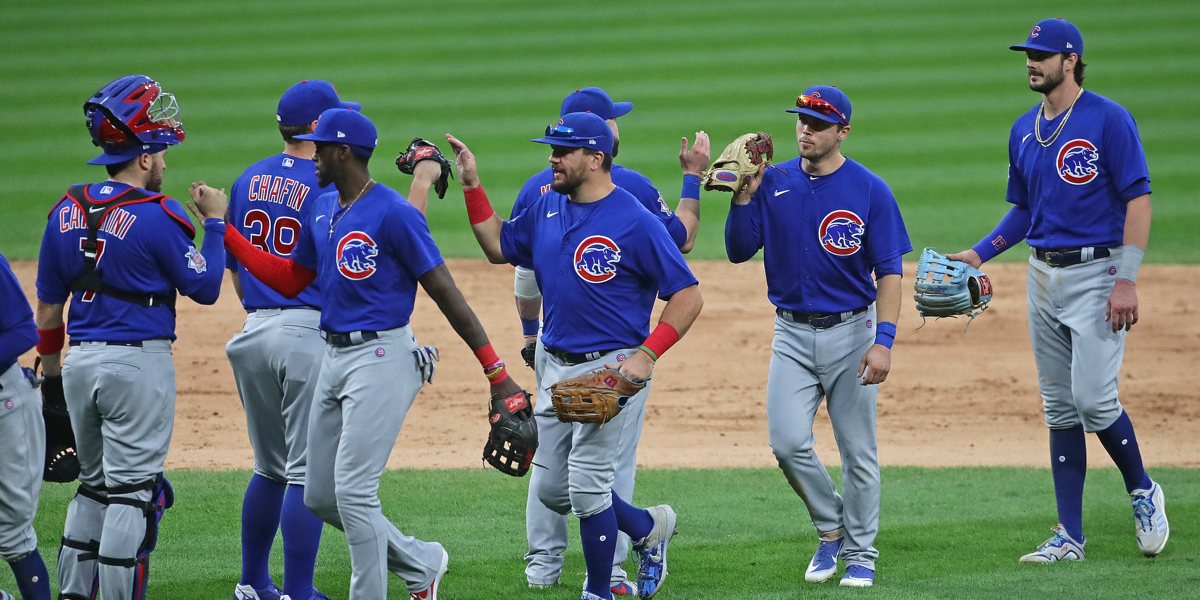 No Cubs last night meant I could watch ‘The Departed’ on one screen and Monday Night Football on another, all while eating ice cream. It was good. Of course, come mid-November, I’ll be missing the Cubs regardless, so here’s hoping they at least make a deep postseason run to help me out in October.

•   The MLB Postseason begins today with the four American League series kicking off, and with them some stellar pitching match-ups: Shane Bieber and Gerrit Cole, Zack Greinke and Kenta Maeda, Lucas Giolito and Jesus Luzardo, plus Blake Snell and Matt Shoemaker (OK, so they can’t all be tip-top tier).

•   The Cubs get underway tomorrow at 1pm CT, with Kyle Hendricks or Yu Darvish on the mound, facing Sandy Alcantara (and the Cubs will hopefully LOAD UP on lefties in the lineup). The Cubs are a big favorite on the betting lines for the series, and that’s likely largely because of their top two starters, Hendricks and Darvish.

•   Every team wants to make a deep run, of course, but you do wonder if there’s some subconscious level at which a club like the Marlins really *is* just happy to have made it back to the postseason for the first time in 17 years, especially given what they went through. And maybe that makes the game prep SLIGHTLY different. And maybe having recent postseason experience AND disappointment gives a slight edge in prep, too. Does that mean the Cubs have a huge edge? Probably not – and anything can happen in a three-game series. But a very small edge? Maybe taking the series odds from 52-48 Cubs to something more like 55-45? Yeah, I could see it. Still means there’s a huge chunk of a chance the Cubs lose this thing, but you have to grab every little edge you can.

•   Oh, but circling back to the Alcantara thing. For his career, he’s got very strong natural splits (.326 wOBA allowed against lefties, .287 against righties). But this year, it’s been absolutely absurd: lefties are hitting a beautiful .268/.366/.493 (.369), righties can do absolutely nothing at .190/.236/.238 (.215). To be sure, it’s a small sample – not even 90 batters faced among each – but if he’s got particular pitches working this year or not, then you’d see it show up in the splits in a relatively small sample, especially given that his pull and groundball rates against righties are ridiculous. My guess is his sinker – which he’s throwing more than ever this year – is brutalizing righties, and he’s REALLY feeling it this year. Just stay away from as many righties as possible against him.

•   That means, in my view, the only righties who can start tomorrow for the Cubs are the guys you basically have to. I’d be tempted to do something really crazy like having Yu Darvish start so that you can have Victor Caratini catching instead of Willson Contreras, and then have Kyle Schwarber DH with Billy Hamilton in center and Ian Happ in left. I’m not sure I could actually get myself the pull the trigger on Hamilton for Contreras, but I’m just saying, the Alcantara splits are so strong that I’m not sure Contreras – who hits a lot of grounders anyway – actually projects to hit any better than Hamilton would. And you get a big defensive upgrade in the outfield. The risk, of course, is that you’d prefer to deploy Hamilton at some point later in the game and now you can’t. But then again, you get Contreras’s bat at the ready for a better match-up in a big spot.

We’ve never done it like this before. #Postseason pic.twitter.com/T9lToLBM9A

All right. I made a bracket. Don't crush me for not ultimately picking the Cubs to win it all – I didn't want to be the jinx. pic.twitter.com/dG9Zcr4dh4

Couldn’t have said it better myself. https://t.co/gIfYajWiQp

•   The comments from Souza, in particular, are impressive given that this is a guy who was DFA’d in the middle of a doubleheader.

•   I don’t care a lick about the pitcher win stat, and it’s a short season, but this is still cool:

Congratulations to Chicago @Cubs ace Yu Darvish (@faridyu) for becoming the first Japanese pitcher to lead the @MLB's National League in wins! We are wishing you the best of luck as the postseason begins! https://t.co/itKD3mYWlB

•   It’s bizarre and kinda sad that this achieves headline status, but also kinda good that this is a thing:

The atmosphere in MLB seems to be changing. For the first time in 4 years, there were no recorded gay slurs by players on the field https://t.co/TjQlbntgZ2

•   Of course, the Thom Brennaman hot mic incident was as high profile as any player comment in recent years, and served as a reminder that the culture of the sport needs to continue to evolve. Being “inclusive” isn’t just a single day at the ballpark, it’s an ongoing effort and attitude that permeates so sufficiently that every fan feels safe and comfortable just being themselves.

•   Well this is just hilarious and brutal:

•   I am not embarrassed to say that I love scented candles, and they are among the Deals of the Day at Amazon. They’re also doing some early Prime Day deals like two Echo Dots for forty bucks. #ad