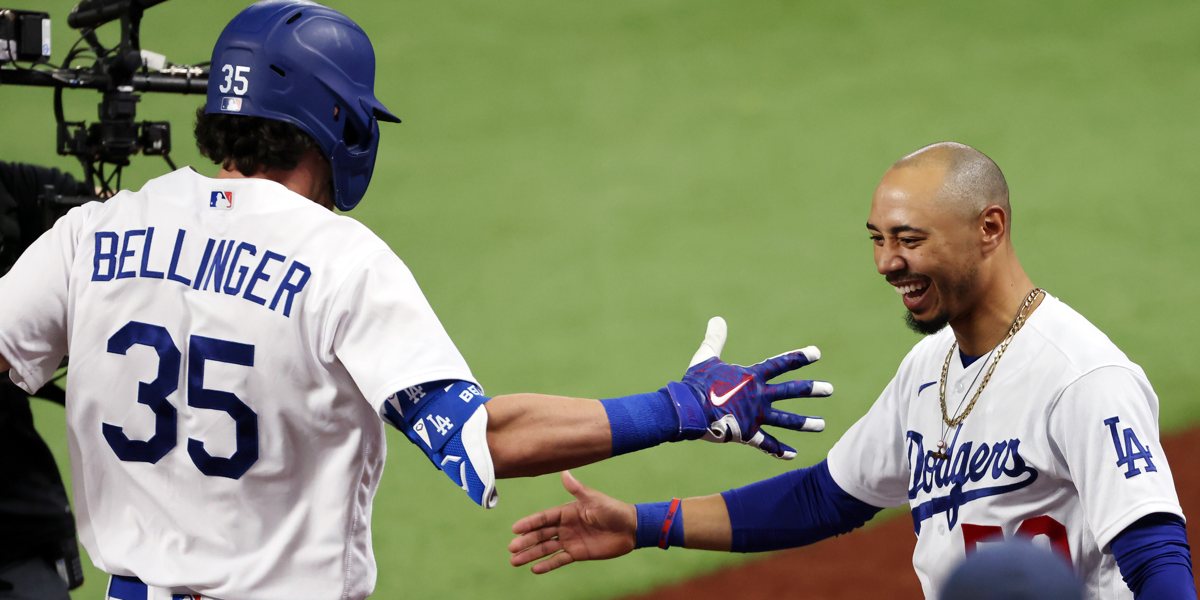 Both National League Divisional Series now stand at 2-0 after the Dodgers and Braves won again. I don’t really care THAT much about getting a sexy five-gamer in these series, but it would be nice if they didn’t both wind up sweeps.

At least the Dodgers-Padres game wasn’t a snoozer, with late scoring, a critical home run robbery, and of course some beefing between the teams:

Of the jawing that followed Cody Bellinger’s home run robbery – it seemed like Manny Machado took issue with Dodgers reliever Brusdar Graterol celebrating the catch by throwing his glove and his hat – Mookie Betts summed it up well:

"When he hit his home run he threw the bat… Then we take one away, we can celebrate too. So there's gotta be two sides to it."
– Mookie Betts on the exchanges with Manny Machado after the Cody Bellinger catch

This was the jawing, btw, with some not-safe-for-work lip reading:

I did not see Manny make a gesture or say anything to Graterol prior to the blown kiss. If he did, that was also out of line. Machado should have tipped his cap and went back into the dugout.

Sigh, the Braves beat the Marlins again, which is fine by me, but is a reminder of how beatable the Marlins are supposed to be:

The A’s scored late to keep their series against the Astros alive, and everyone outside of Houston cheered:

Randy Arozarena just keeps on homering for the Rays, who beat the Yankees to make that series 2-1 Rays:

Arozarena, 25, was a quality Cardinals outfield prospect whom they considered squeezed out of the mix by the presence of Harrison Bader, Tyler O’Neill, Dexter Fowler, and Lane Thomas, so they dealt him to the Rays in the trade for lefty pitching prospect Matthew Liberatore. A good pitching prospect, to be sure, so no beef there. But Arozarena has hit like a dang superstar in the big leagues so far, and I’d imagine Cardinals fans are not smiling about it.

Oh also in that series? Luke Voit, who led the AL in homers this year (his third season raking for the Yankees), and who was also traded by the Cardinals because he was squeezed out. Again, the Cardinals got a very good reliever in Giovanny Gallegos in the deal, but I’m sure Cardinals fans can’t love that their team gave up two guys who became two of the top AL bats this year.