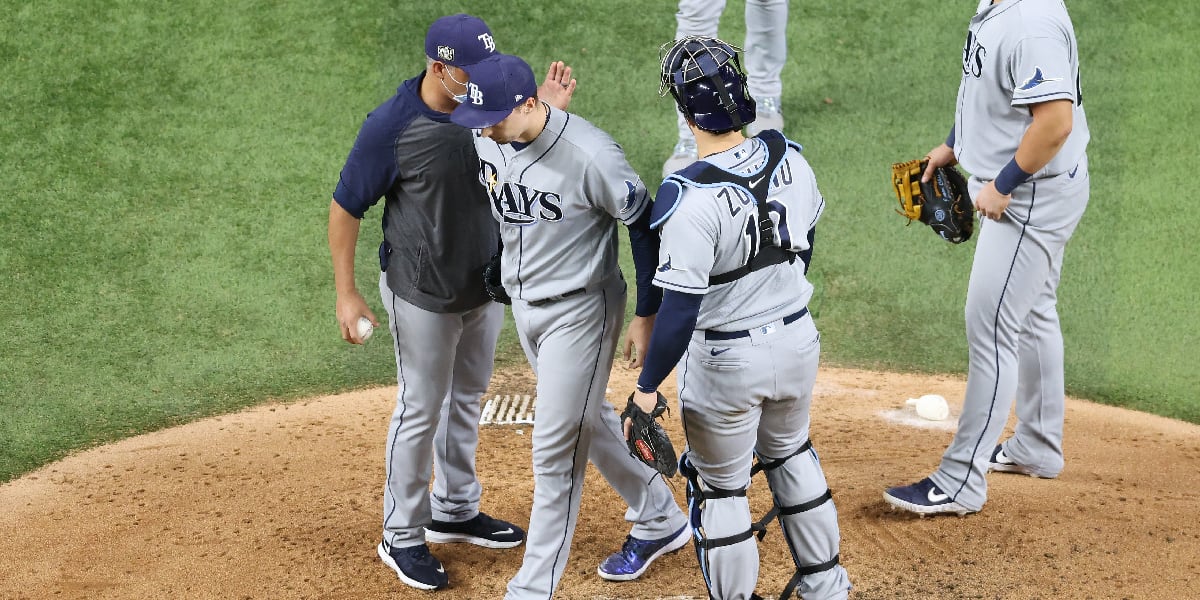 In the hours since the decision to remove Blake Snell from the World Series*, everybody and their mother has been trying to figure out if it was the right call – citing the results, the process, the analytics, etc. But something about the entire conversation has rubbed me the wrong way. Now with that said, note that I do not intend to re-litigate the decision. You can get a quality back-and-forth on that front from this analytical look at The Athletic, if you’re so inclined. Instead, I want to explore the broader argument we’re having, because I’m not sure I like what it says about us as fans. Or as a sport.

Let’s start with this thoughtful thread from Connor Kurcon on Twitter, who uses statistics to explain why the decision to pull Snell was more than justifiable. You can (and should) read the whole thing, but for the purposes of our discussion, you can zero in on what I’ve bolded below:

*and this doesn’t even include the players they left on base! My point in all this, of course, is that the narrative that “Blake Snell was dealing, therefore you keep him in” means nothing.

All of these pitchers were just as good (or better) as Blake Snell and pitching just as well (or better). They were “shoving”, “momentum”, etc. The correct choice, on average, for these 202 starts, was to bring in a good RP. (Not saying Anderson was the right choice for Tampa)

I believe in advanced analytics as much as anyone out there – and, indeed, use them literally every single day. But there’s something wholly unacceptable to me when I read a line like this: “The correct choice, on average …” when the choice in question affects Game 6 of the freakin’ World Series.

OF COURSE, we shouldn’t just rule with our gut. That’s nonsense. And OF COURSE, we should trust analytics. But also … not like this. Not so slavishly. Everything should come in moderation. And if you really aim to be a master of analyzing baseball, you should be frustrated by comments like this: “The narrative that ‘Blake Snell was dealing, therefore you keep him in’ means nothing.”

And that’s not a shot at Kurcon, because, again, he’s technically correct. It’s just that something about this perspective rings hollow. And we have to be honest about that. Hell, maybe just I need to be more honest about that. I’m feeling introspective.

Dan Szymborski (the creator of ZiPS) helped nudge me along my path this morning, with a fantastic thread of his own (bolded emphasis mine once again):

We have enough of Betts that we should only be predicting a 15-20 points-of-OPS advantage against lefties rather than a more normal 40-50 point one. The argument for keeping Snell in (which I favor!) has little to do with Betts platoon splits.

The argument for keeping Snell in is a much simpler one: He was pitching well, efficiently, styming the Dodgers, and he’s not starting again for at least five months. No reason to complicate things unnecessarily!

I know it might sound like an odd thing for a notorious number-cruncher like me to say, but if you’ve read my work, you may be surprised how few stats I actually use in direct writing. Stats guide an intellectually honest story, but they’re not typically the story themselves!

Unless we’re talking fun stuff like records or .400 BA things, stats are far more important for what they *mean* than what they *are*.

Mookie Betts’ platoon splits were but one of MANY legitimate statistical arguments used in the broader post-Snell conversation, but even the strongest arguments can miss the mark. And if even a “notorious number-cruncher” like Szymborski can admit that these decisions are so often bigger than the numbers that inform them, I can’t imagine which talking Twitter-head would have the audacity to think they know better.

But I’m willing to take this all even one step further by asking a few simple questions:

1) Isn’t this all supposed to be fun?
2) Aren’t we supposed to enjoy baseball?
3) And if so, did removing Snell from yesterday’s game actually make anyone feel good?

It’s great that so many front offices, coaching staffs, players, and fans are finally on-board with advanced analytics and I love that we can all understand the game in a fundamentally different way than we had for years, but there is a cost to all of this and we can’t lose sight of that.

And don’t get me wrong, I know winning is important. But I don’t really think it’s more important than enjoyment. Unfortunately, those two things are so closely aligned that we often aim to maximize winning and confuse ourselves into thinking that’s the same thing as maximizing enjoyment. And when every front office, coaching staff, and strategy is boiled down to the same robot-like optimization of winning (not pure enjoyment) we begin to drift away from the the truer, most ideal version of baseball: the actual sport of it all. The 2018 AL Cy Young winner on the poorest team in baseball gutting it out and mowing down six innings of Dodgers hitters, from the richest team in baseball, because he can.

We don’t need to complicate these things. Take him out, leave him in, check the statistics, monitor your gut, take a gamble … whatever. But let’s make these decisions ourselves. Not based solely on a call-sheet of probabilities. That’s not fun. That’s not baseball.

*In Game 6 of the 2020 World Series (an elimination game for Tampa Bay), Rays starter Blake Snell was cruising through 5.1 IP with just 2 hits, no walks, and nine strikeouts. In fact, he had faced just one more Dodger batter than the minimum and was generally cruising through the their lineup. And then … numbers were crunched, decisions happened, Snell came out of the game, and his replacement, Nick Anderson, immediately gave up a double to Mookie Betts, which put the tying run on third. That run wound up scoring on a wild pitch, and Betts wound up scoring the go-ahead, World-Series-winning run on a fielder’s choice a batter later.