Commissioner Rob Manfred: "I wouldn't say a neutral-site World Series is completely off the table" Skip to content 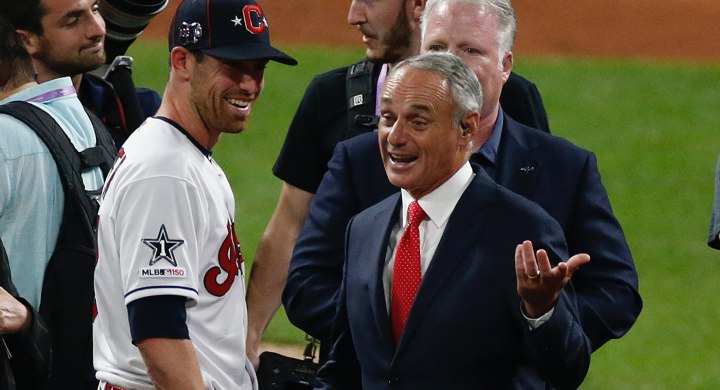 Because of the pandemic, Major League Baseball broke with a number of norms this year, including hosting the World Series at a neutral site. While I expected that some of those normative breaks – various rules in which MLB had a prior interest – might outlive the pandemic, I definitely didn’t expect the World Series thing to be one of them.

To be sure, I still don’t expect it. And, frankly, I don’t even think it’s worth a conversation. But Commissioner Rob Manfred would disagree:

#MLB Commissioner Rob Manfred said the concept of a neutral-site #WorldSeries is at least worthy of further discussion after concluding the first in history at @GlobeLifeField (@EricPrisbell).

This year’s World Series took place at the new Globe Life Field in Arlington, Texas, and did so in front of 10,000-ish fans because of pandemic restrictions. For this year, it worked.

But beyond this year?

“You should always think about innovation,” Manfred told THE DAILY. “I wouldn’t say a neutral-site World Series is completely off the table. There were things that we saw in Texas that were advantages for us. You can plan. You can take out travel. You can pick sites that eliminate weather problems. Those are all things worthy of conversation and discussion. I think the big (weight) on the scale in favor of our traditional format, the thing that really matters at the end of the day, are fans in home markets.”

The good news here is that Manfred clearly sees the biggest factor – especially for a regionally-important sport like baseball – is getting to have the World Series in the teams’ home ballparks. I’d argue that it’s not only important for those home fans, but also for national fans who don’t have a rooting interest. It’s fun to experience those other ballparks at the absolute height of excitement. It is to me, anyway.

As for the reasons to even have the neutral-site discussion, maybe I’d give you a half-point or two on taking away travel, but the weather? We’ve dealt with it for over 100 years. Unless baseball is planning to shift the season even further back into November, the weather really shouldn’t be a major consideration here.

I just don’t see the point of even keeping this on the table going forward. This isn’t the Super Bowl, where it’s one game and everyone’s going to be watching anyway, and you’re going to pack the house no matter what. Heck, imagine the embarrassment of a neutral-site World Series that can’t even fill the seats.