The Cubs Catching Situation, and How a Trade or an Extension Can Create Long-Term Value Skip to content 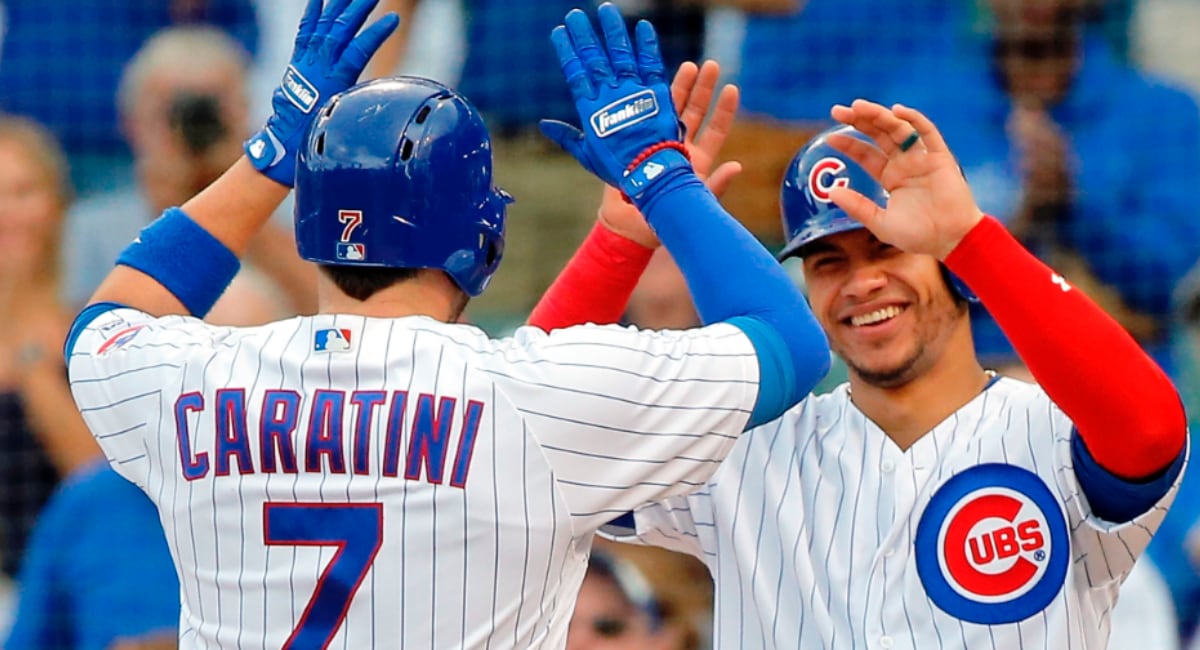 Willson Contreras likes to have some fun on social media, and he’s teased us before, so you can’t presume what he put out there this weekend means anything other than he likes the picture.

Even with an emoji that is usually suggestive:

OH SHIT IT’S A TRADE! NO, WAIT, THE CUBS ARE SIGNING SOMEONE BIG! NO, WAIT, IT’S AN EXTENSION!

It’s … probably none of those things. Obviously nothing of note has happened since. But it did get me thinking generally about the Cubs’ catching situation.

For example, if you wanted to dream on a Willson Contreras extension, it wouldn’t be completely implausible. Consider that the Cubs and Contreras reportedly got close enough an extension to culminate in an offer before, but it didn’t quite happen. From The Athletic a couple years ago:

Sources indicated Willson Contreras is one player who could have been affected by not signing an extension. Unlike Bryant, Javier Báez, Kyle Schwarber, Albert Almora Jr. and Ian Happ, Contreras didn’t have the benefit of getting a sizable draft bonus. Contreras was signed as an international free agent in 2009 and never even received the type of bonus the top-tier IFAs usually get.

That’s not to say Contreras is struggling to make ends meet, but while he was able to put up a first half that was good enough to start in the All-Star Game, Contreras’ defensive lapses, framing issues and lack of power were evident in the second half. Some believe he allowed doubt to creep into his head that he’d missed an opportunity by passing on an extension that the Cubs offered last offseason and it contributed to his struggles.

If extension talks were to happen again, maybe Contreras goes for it this time.

Consider also that there’s now a new sheriff in charge of the Cubs. Consider that Contreras’s place in arbitration (second of three years) lends itself to an extension that could be backloaded such that it wouldn’t necessarily impact the 2021 budget all that much, but would provide a lower overall AAV for the Cubs should they care about the luxury tax down the road. And consider that Contreras has not locked up life-changing money yet in his career, and his newfound framing prowess could wind up an obsolete skill within a year or two (right when he’s reaching free agency).

From the Cubs perspective, they might have one of the two or three best overall catchers in all of baseball under team control for the next two years (age 29 and 30 seasons). But if you could get him to tack in three or so more years on a reasonable extension? When he’s a guy who has shown a tremendous ability to actually develop and adjust in the big leagues? When we know that catcher’s bats sometimes peak a little later than other position players? Why not, right? I don’t think you could justify a crazy LONG extension for Contreras – with apologies to catchers, it’s just the nature of the beast, as the performance cliff can arrive on a dime once a guy gets into his 30s – but a deal that covers a few more years and ensures Contreras life-changing money? That’s win-win.

… and if Contreras doesn’t want to extend this offseason, or if the Cubs aren’t actually into it, then they’ve got to explore his value on the trade market for most of the same reasons above.

Contreras might be the Cubs’ most valuable trade piece, and while you do not want to lose him, we can’t ignore that the Cubs have a young, controlled back-up in Victor Caratini, who very well could be a 60% starter already. We also can’t ignore that the Cubs have a top catching prospect in Miguel Amaya on the 40-man roster, and he is likely to be at AA/AAA next year after his season at the alternate site. There are also P.J. Higgins and Taylor Gushue set to be at AAA, each of whom are plausible big league back-up catchers in the near-term future. We also can’t ignore that two of the Cubs other top 15 prospects (Ronnier Quintero and Ethan Hearn) are also catchers. Much further off, yes, but the position is well-stocked in the long-term is the point. If the Cubs can’t extend Contreras and if the right trade offer came together, it’s a position where the Cubs would be better able to absorb the blow in the near and long-term than most other positions.

As Jed Hoyer said, the Cubs are at a point in time where, because of the looming post-2021 issues, they have to be opportunistic when looking toward the long-term. That means finding what offers would be out there for Contreras OR signing him to a quality extension. Either approach can turn short-term value into long-term value if you get it right. (And if it’s the extension route, then obviously that opens up other opportunities for how the Cubs can best deploy their surplus catching talent in the organization.)