The process of snagging fringe relief arms because they do one or two very interesting things, and then trying to remake them into a great bullpen piece, begins anew. The Cubs have had great success doing it the last two years, and I’m hopeful they can do it again for next season.

This year, the first new pitcher in that vein is Robert Stock, whom the Cubs just claimed off of waivers from the Red Sox.

The 31-year-old righty’s name stood out to me when I saw the announcement, because I knew I’d seen him mentioned before over the years. Now I remember why: 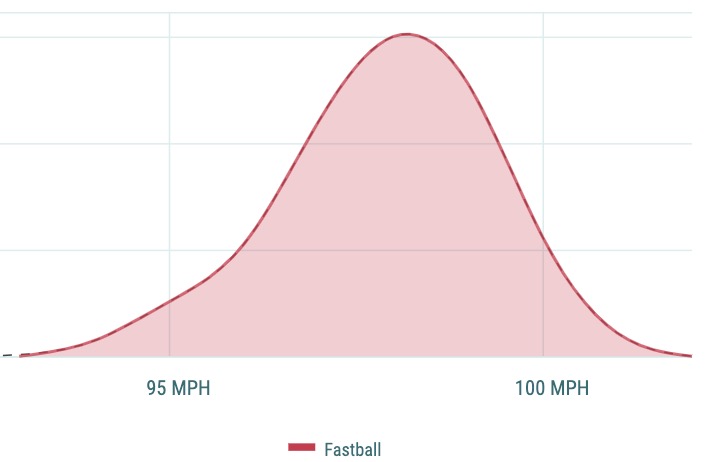 That’s the distribution of his fastballs in 2019 by velocity over at Statcast, and as you can see, he cranks it the heck up there. A former catcher who worked his way through multiple organizations over a long minor league career, Stock finally got a shot in the big leagues with the Padres in 2018, and he was really, really good (which is why I was remembering his name – the premium velocity, plus that was the start of a period when we (and the Cubs) were all really scouring the Padres for fringe arms a la Rowan Wick and Brad Wieck). But he struggled in 2019, and then wound up being just so-so for the Red Sox this past year. Scouting the ole stat line tells me that he’s got explosive stuff, but serious control problems. Hey, he’s a 99 mph flamethrower who was available for free – what’d you expect?

As we’ve seen, you get these guys in the door, and you see what you can do. Some will pan out, many will not.

Stock is out of options, and you see guys like him frequently hitting the waiver wire when various deadlines come, as teams are looking to open up 40-man spots and/or trying to sneak a guy through waivers so they can outright him to AAA for one more year. In this instance, it didn’t work for the Red Sox, and we’ll see if the Cubs just keep Stock rostered on through Spring Training, or if they, themselves, try to sneak him through to AAA at some point.

The Cubs 40-man momentarily stands at 38 after the Stock addition, but when some non-tenders become official tonight, that number will go down. We’ve already heard of one coming non-tender for Jose Martinez.

Speaking of which, I can’t help but note that the Cubs are adding their first fringe/development/work-your-magic reliever to the 40-man on the very day they might non-tender a reliever or two. Indeed, having Stock in place today, specifically, could make it more comfortable for the Cubs to risk non-tendering a guy they otherwise like, but will try to sign back at a lower price.

Bonus? Stock has fun on the Twitters:

I have become a predictive analyst for the Cubs and subsequently signed myself. https://t.co/vamZQadqht