Has Nationals Reported Interest in Kris Bryant Been Overblown? Skip to content 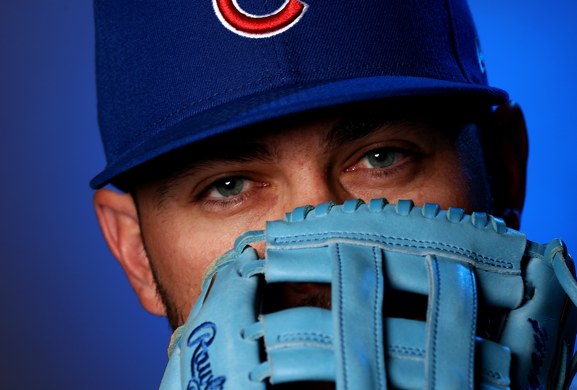 When it comes to the immediate direction of the Washington Nationals, there are undoubtedly a lot of questions. They just won the 2019 World Series behind a brand new manager and still have a trio of talented aces leading one formidable rotation (Scherzer, Strasburg, Corbin). They also have some breakout talent on the positional side, including several youngsters who probably could have made this transitional period a lot easier with some more consistent offensive production. But because a few key prospects didn’t fully pan out at the big league level just as the team lost Bryce Harper and Anthony Rendon from the heart of their lineup, the future is murky, particularly on offense and at third base.

The Cubs third baseman is one of the most obvious and also potentially impactful trade candidates on the market this offseason, he fits a position of need on both sides of then ball in D.C., and the Nationals have the exact sort of post-hype prospects that could theoretically fit in any such deal. Throw in the fact that the Nationals are nearing the end of their run with this rotation and are already running a pretty expensive budget, and a one-year deal for a plug-and-play slugger at the hot corner could be just what the doctor ordered. Where there’s smoke, there’s fire, right?

Well despite a number of rumors this *and* last offseason connecting Kris Bryant to the Nationals – and all those reasons a deal could make sense for both sides – the pushback has been fierce.

Earlier this week, Ken Rosenthal reported that the Nationals suddenly may not be quite so willing to pay a player like Kris Bryant the salary he’s expected to earn via arbitration in 2021, and Brett discussed:

We know the Nats want Bryant (among other possible additions), so how can it be that they are “exploring a trade” for Bryant … but also “probably cannot afford” Bryant?

Well, I think the easiest way to bridge that gap is by keeping it simple: the Nats have a tight budget, like everyone, and would really like to get good players for less money. Also, with rumors getting pretty hot and public, this just feels like one of those pull-back-the-reins situations.

I’m not saying Rosenthal is merely carrying water here – the guy is the best in the biz for a reason – but I am saying that it’s not like you can’t still work out a deal for a guy when money is an issue. Indeed, we had some fun yesterday with a silly suggestion about swapping Bryant for Starlin Castro precisely because Castro carries a $7 million salary that would effective reduce the salary of Bryant in trade. So it’s not like the Nationals can’t “afford” Bryant’s salary if they structure a trade with that in mind.

In short, it’s pretty easy to imagine a scenario wherein the Nationals do want Bryant, but need to play for some leverage now that their intentions have been so widely circulated. That’s not to say money wouldn’t be a hindrance to any deal, but it can be a very convenient scapegoat to adjust the expectations for a lesser return, or adjust expectations for your fan base if they were thinking something was definitely gonna happen.

Well, there’s now another report from The Athletic, this time locally out of Washington:

The #Nationals pursuit of #Cubs Kris Bryant has been, um, overblown to say the least. More:https://t.co/QdZ9sVIqjU

Like Rosenthal, Britt Ghiroli is generally a trustworthy source who wouldn’t merely do the Nationals a favor by throwing this out there. But you don’t have to parse the words of her Tweet or post for a deeper meaning, the message is quite clear (emphasis mine):

Are the Nationals in trade talks with the Cubs over Kris Bryant? No. That interest, as of now, seems tepid at best. Are they interested in free-agent D.J. LeMahieu? Who wouldn’t be? He’s the best second and third baseman on the market.

And to take it a step further, she doesn’t even seem to be cautioning against any moves at all, given the direction of the rest of that paragraph (re: LeMahieu). So how are we supposed to take this? Are the Nationals really not at all interested in Kris Bryant?

Unlike Ghiroli or Rosenthal, I don’t have sources on this and am not reporting rumors here, but there’s a pretty big difference between not presently being in trade talks on Kris Bryant and not having a clear need for a player of his abilities, position, and control. She says it herself later in the post: “The Nationals have obvious holes in the infield, outfield, end of the rotation and bullpen.”

Kris Bryant is a third baseman, but also a capable corner outfielder. The Nationals have shown interest in him before, and have been connected to him repeatedly this offseason by multiple sources. When we start getting down to degrees of interest, we’re doing little more than splitting hairs. Perhaps this isn’t all such an obviously play for leverage – money is tight around baseball, clearly – but the Nationals are also not the only team interested.

All this considered, you shouldn’t be expecting any sort of immediate move to D.C., but I would hardly take the Nationals off the top-of-the-list when it comes to potential landing spots for Kris Bryant if and when the Cubs decide to move him. A fit might not work out – trades are hard – but when we suspect there’s interest, you kind have to regard these reports with a bit of a side eye.

Obligatory reminder: it’s not like the Cubs *have* to trade Bryant, either.