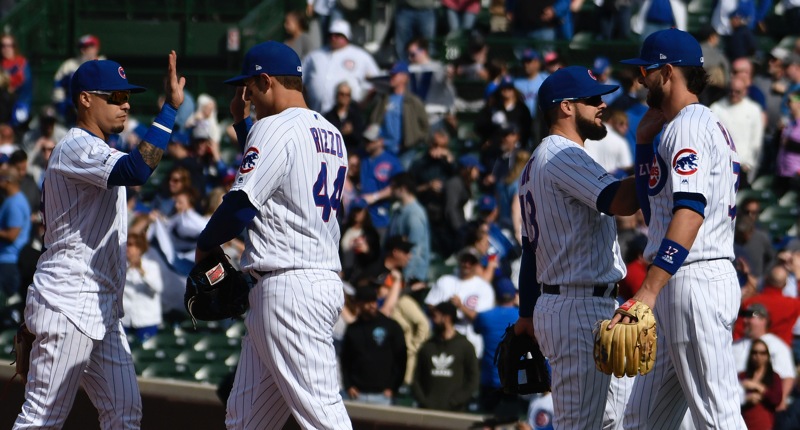 Yesterday was a day. Even as I knew it was going to be an important day for the Chicago Cubs roster, and there could be some organization-shifting decisions made, I hadn’t really looked ahead to project what things would be like today. As in, the Cubs were going to make significant decisions, and the roster would then look very different. It’s weird.

With that in mind, and before I let myself get into the fandom/emotional side of the various decisions, I wanted to reset the Cubs roster and depth chart after yesterday’s moves (signing, waiver claim, and non-tenders), and before the Cubs actually attack the offseason now.

You can’t count on the Cubs to add a “third starter” this offseason, even if that looks like the slot that’s open right now. You can count on the Cubs to target some starting pitchers, though. They’ll probably aim for buy-low, reconstruct types, maybe even just minor league deal/Spring Training invite types. The market is terrible this year for sure-fire starting pitchers, and so many have already signed and been paid surprisingly well. But the market is very deep in interesting, hey-it-could-be types, and many of them will ultimately have to take very small guarantees or minor league deals. That could wind up including all three of the Cubs’ outgoing starting pitchers (Jon Lester, Jose Quintana, and Tyler Chatwood), which is not to say the Cubs would necessarily seek a reunion. Just talking about the tier.

Suffice to say, barring a surprise trade, I’m expecting the Cubs to enter 2021 *really* hoping Alzolay and Mills are legit, one of their low-cost signings breaks out, AND some of their depth on the 40-man roster steps up. It’s not a great situation.

It’s a grab bag already, and the Cubs will keep adding to it with low-cost, specifically-targeted guys that we couldn’t necessarily realistically predict at the moment. Their pitching infrastructure has earned my trust the last couple years with what they want to do with those types of additions (the first of which was the waiver claim of Robert Stock yesterday).

Note that some of the depth starters up there in the first section could emerge as relief options this coming season.

Ideally, the Cubs would add at least one pretty-close-to-sure-thing reliever, but they just aren’t going to commit significant dollars here this offseason. I’m sure of it.

Barring a trade or an offseason injury, these are going to be the guys again, and that’s good. The Cubs have one of the best catching tandems in the game, and they have some interesting depth, too, in P.J. Higgins and Taylor Gushue. Miguel Amaya is on the 40-man, but we can’t presume he’s ready to be the third catcher, if necessary. It’s possible the Cubs could add a veteran on a minor league deal, as they usually do, but it’s also possible they’ll just roll with Higgins and Gushue splitting time at AAA as the “third catcher.”

Hey, at least there’s one part of the Cubs roster you don’t really have any questions about at the moment.

Three of those spots are obvious, and I know you’re wondering why I put a question mark at second base instead of Nico Hoerner. It might be Hoerner at second on Opening Day. But I’m not locking him into that spot after his big league time in 2019 and 2020 really, really confirmed for me that he still needs a whole lot of work on his approach at the plate – pitchers have had a field day getting him to put the ball softly on the ground. The glove is obviously big-league ready, but he’s had SO LITTLE pro experience, and the Cubs have had SO LITTLE success developing bats at the big league level, that my presumption right now is that he needs to start out at AAA (you know, where he’s never played a game).

As far as the reserves go, the addition of Schrock and the retention of Vargas tell you the Cubs wanted to have some high-contact types around to see if they could unlock a little more. There was a time when both Schrock and Vargas were viewed as upside guys; would be nice if the Cubs could finally surprisingly untap one of those types.

Oh my. Lulz. This, uh, needs some work. After the non-tenders of Kyle Schwarber and Albert Almora, and given the dearth of upper-level outfield talent in the system, the Cubs are currently at a spot where it’s possible that new minor league signing Michael Hermosillo would be the starting center fielder (with Happ shifting to left) if the season started today. And, hey, I like the signing, but come on. That can’t be your plan for the big league roster heading into the season.

The Cubs would have the option of putting Kris Bryant in left and David Bote at third if they want to go that route, but it’s more likely that they’ll seek an outfielder in free agency or trade. Yesterday’s moves around baseball put a few interesting additional outfielders on the free agent market – David Dahl, Nomar Mazara, Eddie Rosario, among others – so the Cubs are going to be able to find options out there for their limited dollars (no, they will not be in on George Springer).

Could they find the perfect fit? Say, a center fielder with a high-contact, split-neutral bat from the right side? Probably not. And, of course, when you start compromising in other ways, it’s going to be very hard for me not to say, “You shoulda just kept Schwarber, damn it!” But we’ll see what the Cubs have in mind when we get there.

Also, the depth. The Cubs flat out do not have a credible fourth outfielder at the moment, much less a fifth or sixth. I love Ian Happ and Jason Heyward, so that’s good. But otherwise, yikes.

For now, the optimist in you can say, “Wow, the Cubs sure do have a lot of opportunities available in the outfield.”