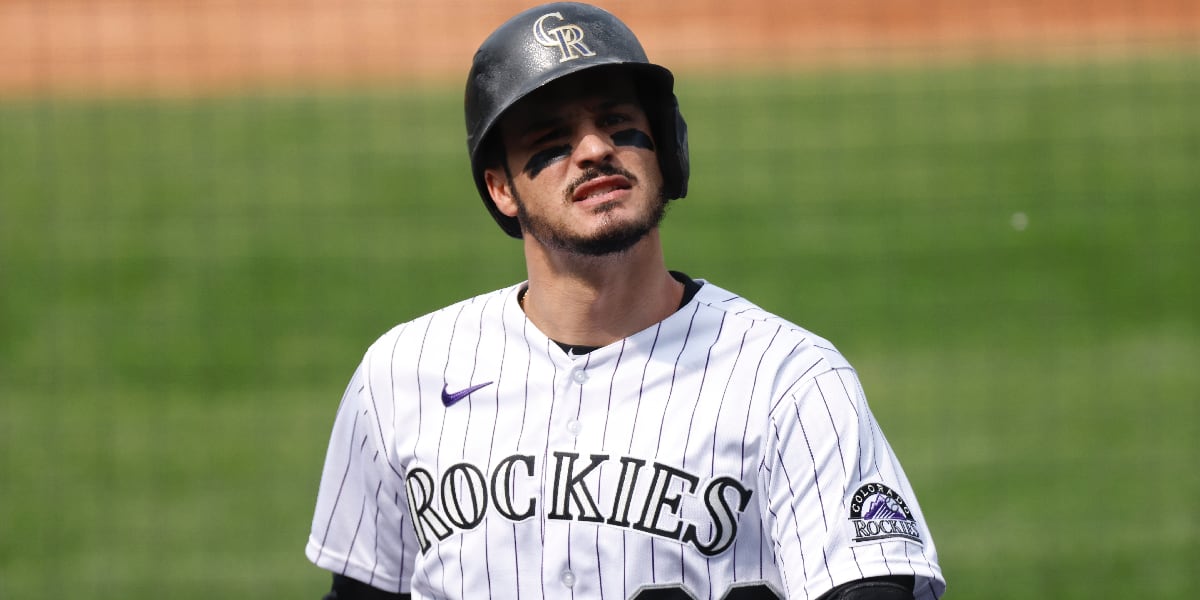 Here’s a friendly reminder that the Chicago Cubs currently employ just two (and-a-half?) outfielders: Ian Happ, Jason Heyward (, and Kris Bryant). Here’s a friendlier reminder that Brett took a deeper dive on this winter’s available free agent corner outfielders (minus Marcell Ozuna and Michael Brantley, for what should be fairly obvious rea$on$), who could fit the Cubs. Happy shopping.

UPDATE: Whoops … looks like Hunter Renfroe is no longer a free agent. The Red Sox scooped him up before I clicked publish.

Nolan Arenado’s availability has always been the most fascinating to me among the recent superstars on the trade block (Kris Bryant, Francisco Lindor, Mookie Betts). For so many years, the Rockies defined themselves by Arenado, and even gave him an eight-year, $260M deal less than two years ago (six years and $199M remaining).

But after a falling out with the GM over the direction of the franchise, the star third baseman has been nudging his way out of Colorado at every opportunity. Indeed, he’s quite willing to waive his no-trade clause and would even reportedly adjust the timing of his opt-out (which comes after 2021, as of now).

The Cubs were connected to Arenado in the past, but it’s been quite a while since those rumors persisted, not to mention the arrival of COVID-19 crushing the Cubs budget and making it even less likely. So for now, we can go with Ken Rosenthal’s list of potential suitors, which includes the Dodgers (in a seriously wild theoretical series of moves), the Braves, and the Cardinals, among other non-listed teams. So basically: Yuck, yuck, and yuuuuuuuuck.

But Buster Olney’s perspective may be more useful to us. According to his sources, Arenado might land a deal worth only $100-$125M if he were a free agent this year, which makes the likelihood of trading for his $199M contract very difficult to imagine (the Rockies would have to eat a LOT of cash to get mostly nothing in return for their franchise face). So if a trade is unlikely, Arenado may have to opt-out of his deal next offseason if he really wants to leave the Rockies.

The problem there is that a poor 2020 showing, the Coors Effect (on perceived value), and the post-2021 monster infield free agent class may restrict his earning potential. So Arenado may have to decide if he wants to opt-out of his deal (earning less money in free agency) or stay in Colorado (where he doesn’t want to play).

Joel Sherman spoke to eight executives about a Francisco Lindor deal, and this is the *closest* anyone got to saying he won’t be moved:

“I have too much respect for Chris [Antonetti, Indians president of baseball operations] to think he would make a trade without getting something of significance, so I guess I don’t think [Lindor] is definitely getting traded, but I do nevertheless think he is getting traded.”

If you’re curious, Sherman answers a series of questions on the potential trade, from the timing, to the impact of the pandemic, to the potential framework for a deal, all of which is very interesting. But for all of the obvious rumors, the landing spots still aren’t quite clear.

Everyone knows the Blue Jays are legitimately interested (Sherman, Jeff Passan, plenty others), but the Yankees are probably there only if they miss out on re-signing DJ LeMahieu, and the Mets have been very clear about not wanting to use their young players as capital right now. The Padres were once connected, but are no longer seen as a logical destination, and the Dodgers are “unlikely to make this kind of trade two years in a row.”

Also complicating factors? The financial market. The single year of control. The down 2020 season. Also the shortstop competition. In trade, Carlos Correa, Trevor Story, and even Javy Báez are theoretically available, and in free agency, Didi Gregorius, Marcus Semien, Andrelton Simmons, and Ha-Seong Kim are all available. Oh, and of course the next free agent class has Lindor, Baez, Correa, Seager, and Story … so good luck, Indians (or Spiders?)!

And don’t forget the availability of Nolan Arenado!

All of which is to say … if it’s this hard to trade Francisco Lindor right now, imagine how tough it is to trade for Kris Bryant, who’s just as expensive, plays a less valuable position, and is coming off an injured and way more down year.

The White Sox continue to be the team most often linked to top free agent reliever Liam Hendriks, but Jeff Passan adds that the Dodgers, Astros, Mets, and Blue Jays are all also in pursuit (the Phillies’ interest could be there, but it depends on the immediate aggressiveness of Dave Dombrowski).

Hendriks is reportedly seeking “a four-year deal at a strong annual value,” but it is tough to imagine him getting something that significant after the entire league passed on Brad Hand at one year and $10M. Hendriks is better, no doubt, but Hand is a year younger and getting a high quality reliever like that on a one-year deal is not an opportunity that comes around often.

Other relievers/closers on the market include Blake Treinen, Alex Colome, Trevor Rosenthal. I doubt the Cubs will become involved with any (though that may be okay, given their successful approach in the pen).

J.T. Realmuto is probably the top catcher in MLB, and so was expected to be met by a very welcoming free agent market (even despite COVID-crunched budgets). But now that the catcher-needy and big-spending Mets have turned to James McCann on a four-year deal, and considering that the Phillies are not necessarily ready to spend, Realmuto’s market is a little unclear/soft.

According to Ken Rosenthal, his suitors include the Astros, Nationals, Blue Jays, Cardinals (if they lose Yadier Molina), and Yankees (if they lose LeMahieu) – as well as the Tigers and Mariners if he’s willing to go to a less certain near-term contender. But if he’s really seeking $125 million, he might be hard-pressed to find it (the Dodgers are mentioned as a possibility, but are also dismissed as an “imperfect financial fit”).

Relatedly, Buster Olney outlines one possible path for Realmuto that has the star catcher waiting until late January-February for a clearer market and outlook on the pandemic.

So much of this offseason is being tied up by non-market factors (rules, schedules, pandemics, vaccines, etc.), but sometimes, it’s just good old fashioned free agency holding things up.

For example, the Yankees are connected to a TON of players in both trade and free agency, but almost every single move depends on the outcome with DJ LeMahieu. And how’s that going? Uhm … not so well:

The gulf between the Yankees and DJ LeMahieu is wider than $25 million, a person with knowledge of the situation told NJ Advance Media late Saturday. A deal doesn't appear quite imminent … (1/3) https://t.co/ZChdjQa9RA

Gap between Yankees and LeMahieu larger than $25M, sources tell The Athletic. LeMahieu is Yankees’ No. 1 priority and the two sides continue to talk, but the free-agent infielder also plans to start engaging with other teams. On it: @BrendanKutyNJ

Kuty’s Tweet is actually part of a thread, which includes two other important pieces of information: (1) the union is telling its players to hold off on signing deals if the price is not exactly right, considering all the rules changes and pandemic-related info to come, and (2) some executives around the league are dubious on the Blue Jays apparent desire to spend big this offseason.

The Angels need starting pitching (badly) and are expected to dabble in the top-tier of the market (think trading for Blake Snell or signing Trevor Bauer). If they go the trade route, Ken Rosenthal estimates that Jo Adell could be dangled as a center piece for a top-flight starter like Snell. Or, by contrast (and/or in concert with another move), the Angels could package a top-50 prospect like Brandon Marsh with an expensive outfielder like Justin Upton to clear some cash and incentivize the other team to take on Upton’s deal (they did something similar last year with Zack Cozart and Will Wilson).

The Angels are also interested in free agent catcher Kurt Suzuki, for whatever that’s worth.

Despite the Cubs’ stable of available catchers, their need for an outfielder *and* top prospects, and the presence of Joe Maddon in Anaheim (or Los Angeles, or whatever), the Cubs don’t strike me as involved in any of the above.

Everyone expects the Mets to spend big this offseason, but Joel Sherman wonders if there’s another approach – signaled by their prioritization of James McCann over JT Realmuto – that keeps them focused on DOMINATING the second tier of the market:

What if on top of [Trevor May and James McCann] — as an example — the Mets also landed Liam Hendriks, Jake Odorizzi, Masahiro Tanaka and Jackie Bradley Jr.?

That would certainly be interesting, and could leave a huge void at the top of the market, with the Dodgers, Yankees, Cubs, and Red Sox all also sparsely spending. [Brett, as an aside: Hendriks is second tier? Huh?]

The Nationals still really need a catcher, but with McCann off the board and Realmuto likely out of their price range, Mark Zuckerman details a tough path forward.

If not Realmuto, though, where do the Nats turn? The catching market, as stated earlier, is awfully lean this winter.

The most notable names after Realmuto and McCann are Yadier Molina (who would have to be convinced to leave St. Louis after 17 seasons), Jason Castro (who hit .188 this season in Anaheim and San Diego), Mike Zunino (who hit .147 for Tampa Bay, but did launch four homers in the postseason and impress behind the plate) and Kurt Suzuki (whose time in D.C. seemed to come to an end in September).

Again, Cubs. Catchers. Etc. That stuff is out there, and as much as I don’t want to see it with respect to Contreras, it’s impossible to ignore. That said, pretty hard to imagine the Nationals being able to put together the right offer for Contreras, since their best young pieces are either way too valuable to trade for Contreras, or not nearly valuable enough.