Although the involved parties have been saying for a while now that they expect the season to begin on time and feature the full slate of games, there was always understandable hedging available. Bah, there probably still is.

But I will say that this is definitely the closest we’ve come yet to a definitive confirmation that things really will proceed without a delay for the 2021 MLB season:

Rob Manfred: MLB teams should plan for spring training to start on time, full 162-game season to be played https://t.co/MCH7NB88CT

This strikes me as a really, really good sign if you’re hoping for Spring Training to begin in a month, and the regular season to follow on schedule from there (albeit with health and safety protocols once again in place).

Why do I find this particular version of the news so heartening? Well, two reasons. One, it was Bob Nightengale and USA Today that first broke/floated the desire from MLB owners to push the season back by a month (and maybe chop off some games) in order to get the players and coaches all vaccinated. Our belief at that time was that it was really about playing fewer games without fans for financial reasons, and subsequent reporting has increasingly indicated that the owners weren’t going to have the leverage to pull it off. So for Nightengale and USA Today to now be the ones to first report word of Manfred telling teams to plan on an on-time start, well, that’s meaningful.

The second reason I find the news heartening is that, indeed, the owners *DID* want to push things back, but they found that they just weren’t going to be able to get the players on board this time around:

Major League Baseball was hoping to delay the season by at least a month to provide more time for players and fans to receive COVID-19 vaccinations, enabling fans to get back into ballparks earlier. But the Major League Baseball Players Association vigorously fought it.

MLB does not have the legal right to unilaterally delay the start of the season without approval from the union because of the collective bargaining agreement, and the union made it clear it wouldn’t accept anything less than 100% pay for the season.

Unlike other sports, the MLB CBA’s language about national emergencies appears only to apply when the games cannot be played *because* of the pandemic. Games, however, were ultimately able to be played last year, so it’s basically impossible for MLB to now say it is impossible.

No one will argue, however, that it won’t be another huge hit to revenue to play fan-less games in April and May and maybe beyond. It’s going to hurt teams like the Cubs, who rely on game-day revenues more than most, a disproportionate amount. But the CBA exists, and the show must go on. I think the owners have likely been anticipating this outcome for a while, which is why we’ve seen severely restricted budgets, not just because of the losses from last year, but because no one’s really going to know how this year goes until much later in the year. And until much later in the year, the teams know they are going to be paying player salaries during games without fans.

I would say now is the time to get those expanded postseason negotiations rolling, as well as any necessary rules changes, don’t you think? 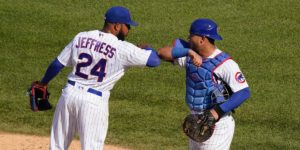