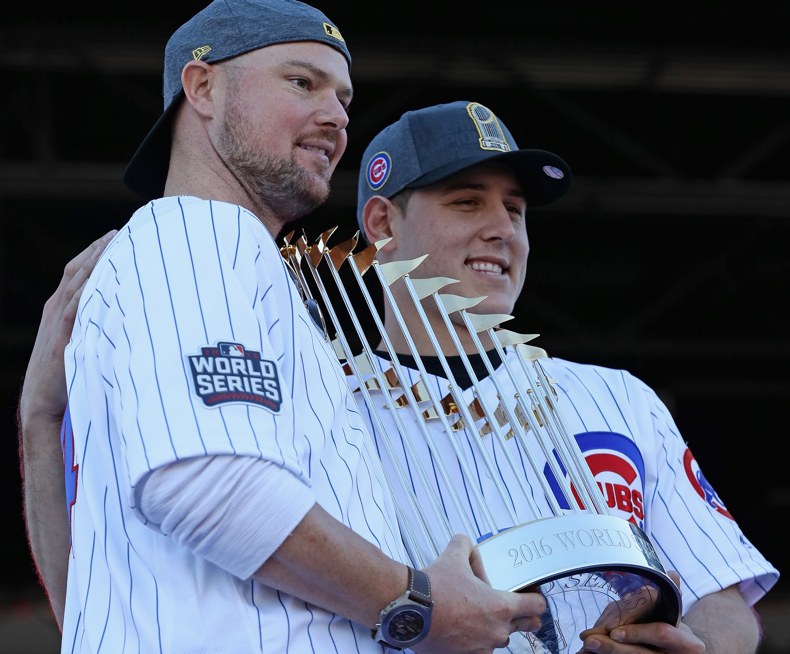 The rumors popped up earlier today that the sides were in talks, and they immediately had the feel of a, “Oh, yeah, this is gonna happen” type situation.

Left-handed starter Jon Lester and the Washington Nationals are in agreement on a one-year deal with a mutual option, pending physical, sources familiar with the contract told ESPN.

After a phenomenal six years in Chicago, Lester off to D.C. to join Scherzer, Strasburg, Corbin.

Lester, 37, joins Kyle Schwarber in signing with the Nationals on a one-year-plus-mutual-option deal after departing the Chicago Cubs. (UPDATE: Other reports indicate there is no option, for what it’s worth.)

There will be time soon to relive the incredible six years that Lester had with the Cubs, featuring near across-the-board solid work in the regular season, periodic stellar work when it mattered most, and dominance and reliability in the postseason. In the pantheon of Cubs free agent signings, Lester will long be remembered as one of the best.

He was also a veteran leader, a tremendous worker, a behind-the-scenes incredibly kind person, a helpful teammate, and a great representative of the Cubs. We always knew that it was unlikely he’d be with the Cubs, like, until he retired, and the expiration of his contract marked a likely end. But still … these things just don’t really feel final until the player actually signs with another team.

Dave Kaplan suggests the Cubs did make an offer, but it was not up to par:

Beyond disappointing the Cubs offer to Jon Lester came very late in the process and was not close to the money the Washington Nationals offered. That is not how you take care of the greatest free agent signing in team history and one of the two best in Chicago sports history.

I hope, like Schwarber, Lester kicks ass with the Nationals, and I know that we’ll always have the memories. More soon.

It's not the greatest thing he ever did with the Cubs, but it's impossible for me to think about Jon Lester and not think about the walk-off bunt. pic.twitter.com/DBVyMDTJwN

The veteran. The lefthander. Number 34. BDJ.

Thank you for everything, Jon Lester. Forever a Chicago Cubs legend. pic.twitter.com/wJDNbFusJ3