Blue Jays Complete Their Two-For: Michael Brantley Signs a Three-Year Deal Right After George Springer (UPDATE: Strike All of That ... He's Re-signing with the Astros)) Skip to content

UPDATE: Ignore most of what’s below, Michael Brantley is apparently now re-signing with the Houston Astros, not the Toronto Blue Jays, as was previously reported. We’ll have much more on the fallout soon, but just FYI:

MLB source: #Astros reach an agreement with Michael Brantley on a two-year deal worth $32 million.

When George Springer signed his massive six-year, $150 million deal with the Blue Jays last night, reports quickly trickled out that his friend and former Astros teammate Michael Brantley could soon join him in Toronto. In fact, you wonder if Springer wound up making his decision not only because the Blue Jays upped their offer beyond the Mets, but also because they finally got things settled with Brantley.

Brantley, 33, gets a three-year deal from the Blue Jays, which is simultaneously yet another sign of a healthy market, as well as an acknowledgement of his offensive prowess and consistency over these past three seasons: 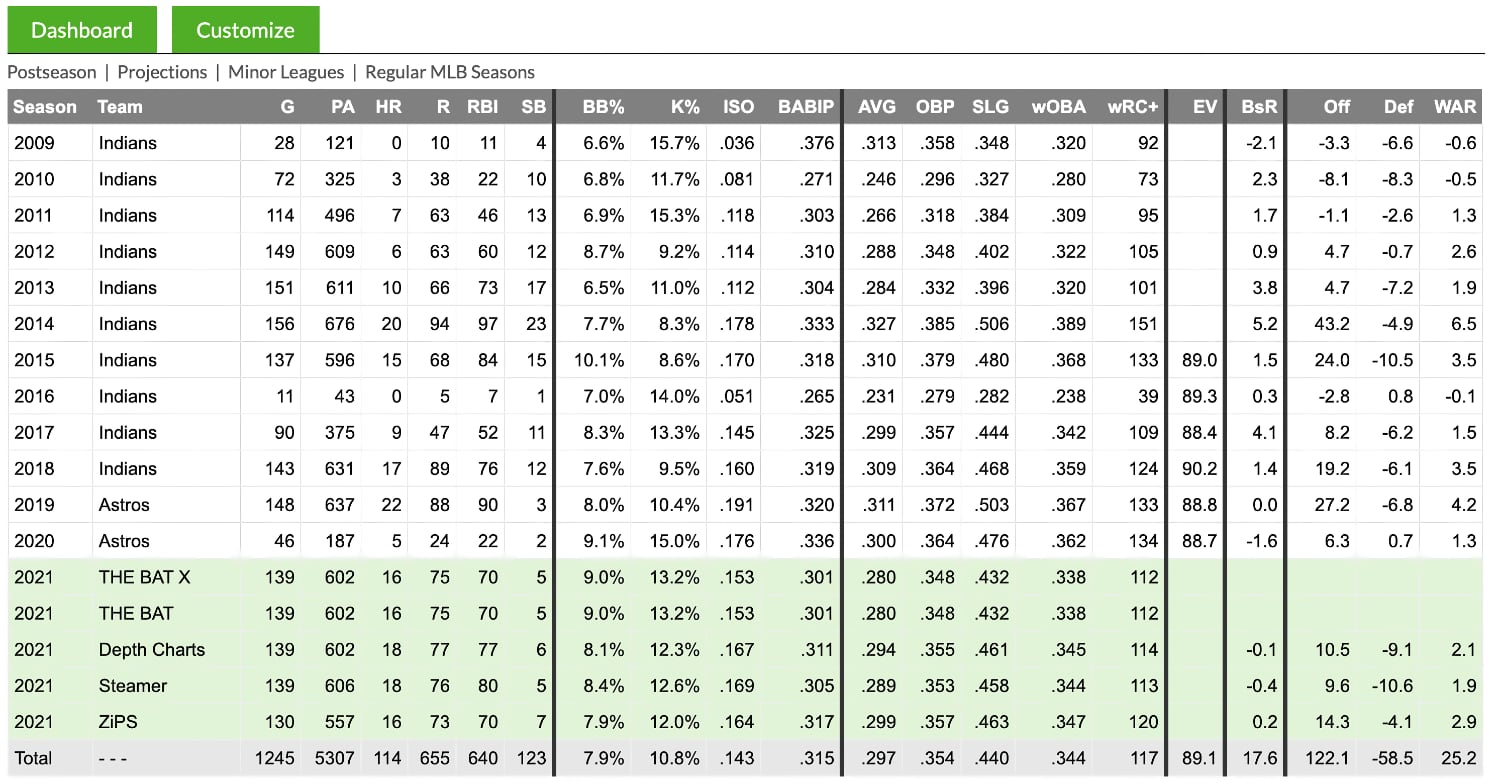 Brantley likely files in as the Blue Jays designated hitter for 2021 and beyond, so in terms of impact, you can likely cross Toronto off the list for – at least – Nelson Cruz, (though he seemingly remains willing to wait out the decision on a universal designated hitter before making his choice anyway) and Marcell Ozuna, as well.

The Blue Jays are likely still a threat to sign a pitcher like Trevor Bauer or even make another trade (they were reportedly still interested in adding an infielder), but these were also two big pieces of the puzzle and leaves them with a pretty staked lineup as is. Of course that very fact is what led Ben Nicholson-Smith to point out that the surplus in the outfield could lead to a trade, and he has some guesses as to who could be made available:

Once the #BlueJays add Springer & Brantley (still weird to type that), they'll have a clear surplus of position players, especially in the OF

From here, Gurriel Jr. & Grichuk look like trade candidates. It's conceivable that Jays already have a framework in place

Regardless of the fallout from this deal, however, one thing is clear: the market is moving. There’s no more holdup. January is the new November/December and there’s a LOT of free agents and trades still to be had. I wouldn’t venture too far from your phone this week, because I’m virtually certain much more is coming.

(There are no direct Cubs implications here, with respect to Brantley. Chicago is not looking to spend, let alone on a win-now, 33-year-old DH. Obviously, his removal from the market could spur other downstream action (the Blue Jays want an infielder, the Cubs need an outfielder, etc.), but we’d need some red string and a white board to make that connection particularly direct. Nah. The Springer deal did more to move the market with respect to the Cubs than Brantley.)

UPDATE: Well, this was unexpected – especially considering the fact that both of these guys (arguably the two most trustworthy national baseball reporters) had previously said the deal *was* done …

There is not an agreement in place between outfielder Michael Brantley and the Toronto Blue Jays, according to a source. The Blue Jays are among the teams still in on Brantley, and a deal may eventually get done, but it is not finished.

Now hearing same as @Feinsand and @JeffPassan: No agreement yet between Blue Jays and Brantley. Two sides remain in discussions. Apologies for being among those who reported deal prematurely.

… So I guess we’ll have to wait and see? Perhaps something got fuddled last minute (medicals? misunderstanding? a reduction in the offer at the 11th hour?). Stay tuned, I guess.