El Mago is the Best of the Best, Hernandez's Extreme Upside, Bryant Ticked, and Other Cubs Bullets Skip to content 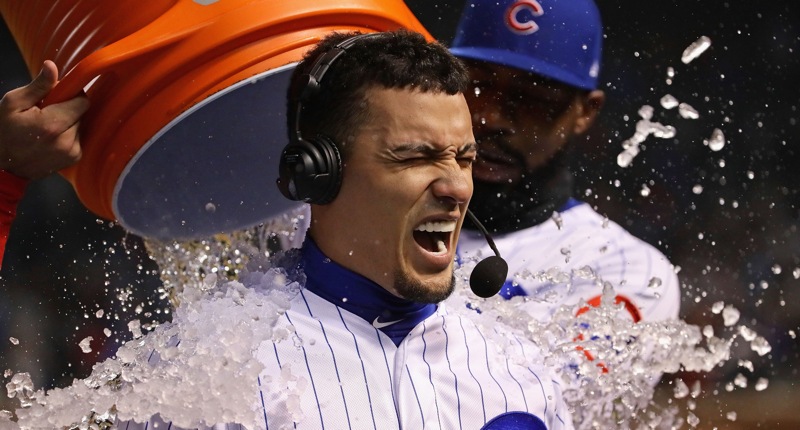 Have I told you guys about my new maximum-efficiency shower routine? It’s awesome. I have my face wash, shampoo, and soap in specific places in the shower so that I can start with the face wash – which requires closing the eyes – and then go for the shampoo and then soap, still with eyes closed. That does two things: (1) forces me to move with relative pace through each of the washing steps because you want to open your eyes as soon as possible, and (2) allows me to rinse everything all at once, rather than piecemeal. This brilliant strategy probably saves me a solid 30 to 60 seconds per shower!

•   Equally IMPORTANT information for you: Javy Báez has the best nickname in baseball, as ranked by Michael Clair at MLB.com. El Mago es numero uno, and deservedly so: “Perhaps the perfect nickname. Coined by The Bigs, an independent sports media organization in Chicago, it fits Báez like a — excuse the pun — glove. If you knew nothing about baseball and were told you were about to see El Mago take the field, you would be ready to see something your eyes couldn’t believe. Báez delivers that nearly every time he plays.”

•   You can’t even pick a best of the best with Javy, because there are too many highlight reels that are too voluminous. I mean, his top 2019 fielding plays ALONE is a 10 minute video:

•   Others who show up on the list that you’ll recognize: the Stringbean Slinger, 3 a.m., and Shark. My personal favorites, outside of El Mago, are Willians Astudillo’s La Tortuga and Travis Shaw’s Mayor of Ding Dong City (criminally underrated at number 46).

•   It’s important to keep the perspective in mind on a 17-year-old prospect, because there is SO much development distance between impressive tools and physicality as a teenager, and then actual professional production in even the mid-level minor leaguers. But there’s a reason Hernandez gets talked about in the same breath as Jorge Soler and Gleyber Torres there by Dorey – it’s because Hernandez is the first signing the Cubs have had SINCE those types who has that kind of on-paper developmental upside. That’s also probably the last time I’d support having a fresh IFA signing in the Cubs’ top ten prospects, and I would absolutely have Hernandez there for the Cubs in that 6 to 10 range. No one wants to say it out loud because you have to make sure people do keep things in perspective, but the reality is that Hernandez’s *possible upside* is that of a superstar who combines great defense at shortstop with a top-tier bat.

•   Kris Bryant, who basically never tweets, hopped on yesterday to send out his displeasure with how ESPN framed his comments about being unhappy at times:

Must be a slow news day to take something genuine and turn it into something out of context. Do better @espn #clickbait https://t.co/sdV5id3bfV

•   I think Rogers’ editors didn’t do him any favors with that headline (the article was more fair), but I also think there was a better angle to take with Bryant’s comments, which were at core about all the negative non-baseball attention he receives (i.e., constant trade rumor discussion).

•   I think you could probably nitpick a spot or two, and I question whether Goldschmidt is still number two, but all in all I think this is fair:

How does @MLBNetwork's Top 10 First Basemen compare to yours? pic.twitter.com/st0Vgf491p

•   Our latest pod, where I could not help myself but get a little heated:

🎙️A new episode of Onto Waveland with @BleacherNation, @sahadevsharma and @PJ_Mooney is live👇

•   Descalso, you’ll recall, got two years and $5 million ($2.5 million AAV). I’m setting the over/under at half a Descalso signing for the Cubs this offseason being the big deal ($1.25 million AAV) – you taking the over or the under?

Remember the hype poster from 60 games ago? pic.twitter.com/Tfgg7ZHbyP

•   For those of you in Michigan or Virginia: legal sports betting just opened up in those states, so you can sign up at those links (which supports BN in the process, so thanks for understanding the PROMOTIONAL efforts). For the rest of you folks in states where it’s allowed, there’s a great promo for the NFL games on Sunday.