Carlos Rodon is "On the Cubs' Radar," and They Will Scout Him This Week Skip to content

Apropos of the multiple discussions on which buy-low, reclamation pitchers the Chicago Cubs could be targeting, it sounds like they are, in fact, considering at least one guy in that group: former White Sox lefty Carlos Rodon.

Bruce Levine reports, “The club’s scouts are continuing to observe pitchers’ workouts, and one of those on the Cubs’ radar is left-hander Carlos Rodon. The Cubs plan to watch Rodon throw this week, sources said.”

With Levine tapped into both the Cubs and White Sox, it’s a fair bet that his sources on this are solid. Moreover, given that we know the Cubs are probably checking in on lots of buy-low, reclamation pitchers, the fact that Rodon is called out specifically here is probably a signal that they might be higher on him than some of the others.

Among the guys we’ve talked about recently, Rodon is probably my favorite option for the Cubs, given the relative youth, the substantial upside, and the fact that he’s just now heading into his first full year after Tommy John surgery (perhaps the performance trail off was addressed by the surgery, and now he’ll be in a better position – so far removed from surgery – to remake himself with the Cubs’ help). Throw in the fact that Rodon dealt with shoulder issues in 2017 and 2018, and you just wonder if the talent was always there, but he just hasn’t been healthy yet.

To be sure, the smart bet on almost any of these guys is that they DON’T pan out. But if you’re going to take a swing, why not take a swing on a formerly super elite prospect with at least one formerly super elite pitch? Past injuries are a great predictor of future injuries and lagging performance, but it’s also true that sometimes, a guy is just held back by injuries … and once he’s over them, the talent shines through again.

Our previous comments on Rodon here:

The White Sox drafted Carlos Rodón third overall in the 2014 MLB Draft, one spot before the Cubs took Kyle Schwarber. But soon after becoming one of the top prospects in MLB, Rodón’s career stalled out at the big league level when injuries to his wrist, shoulder, and ultimately elbow (Tommy John surgery) cost him most of his career thus far.

While it hurts to type, the White Sox are looking at too competitive of a season to give him a chance in their rotation, while the Cubs should have plenty of innings to go around, and enough of a reason to want to figure it out with someone of his age and background. And it’s important to note that his velocity started bouncing back in 2020.

With even more space between him and TJS, I don’t think it would be crazy to assume he could recapture some of the magic that led him to becoming a top-3 overall draft pick. And, hey, the Cubs could use a lefty in this righty-heavy rotation.

What makes him unique? It’s led every single scouting report since Rodon’s college days: plus-plus slider. Prior to 2020, Rodon had never allowed a batting average over .200 or a slugging percentage over .300 on the pitch in a single season. The lowest the single-season whiff rate had ever been was the great 38.9% mark as a rookie.

How didn’t his last team do a good enough job of emphasizing that? No criticisms for the White Sox here, it’s just clear the slider wasn’t in the same shape upon returning from injury. Rodon also faced the unlucky assignment of facing almost entirely right-handed lineups in every 2020 appearance.

How can the Cubs emphasize it better? For re-discovering the slider, we’ll have Rodon work out of our … Pitch Lab (seriously, I imagine these sales pitches are a broken record on that front). The release point is definitely something to look at, as you can see it was clearly a little different in 2020 (both compared to years past, and also relative to the other pitches): 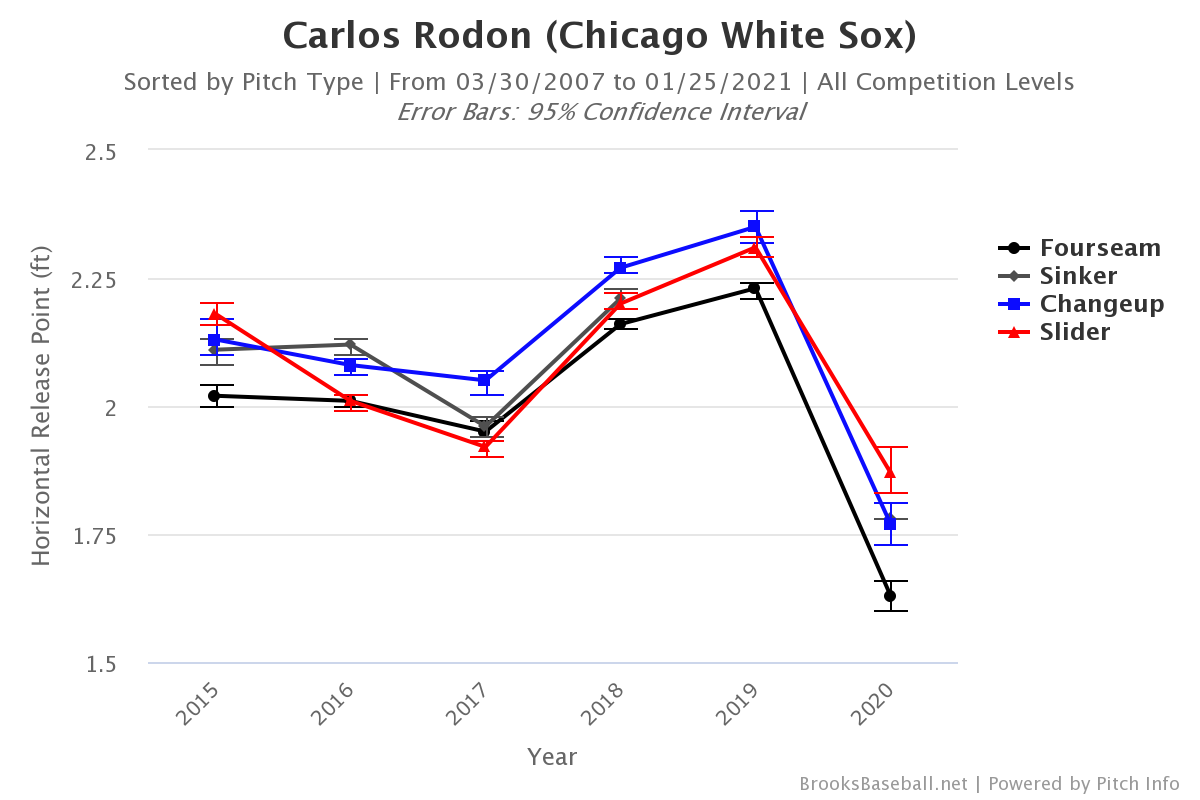 This is most important for just getting the slider where it needs to be again. Trying to re-establish the lost velocity is one thought, but more importantly, it just needs to tunnel off the rest of his arsenal. I’d expect the Cubs to re-introduce the sinker as well.

This was his return from Tommy John surgery in 2020: