When Chicago Cubs VP of Player Development Matt Dorey texted righty Tyson Miller to come up to the South Bend press box for a meeting on August 16, he kind of had a feeling. The conversation that followed was a blur, but Miller knew one thing had definitely come out of it: he was headed to Chicago.

“Once he started talking and saying I got called up, I kind of forgot what he’d said,” Miller told me. “And then on the way [to Chicago] I texted him ‘so what’s the plan for tomorrow again’ and he’s like ‘you’re starting game 2’ and I was like OK, cool.”

Wrigley Field wasn’t exactly how Miller might have once dreamed it would be for his debut, but there was a bit of silver lining. “It was kind of like playing at Sloan Park in the AZL where it’s just players and scouts, so that helped a lot with the nerves. I would have been a lot more nervous with 35,000 people there.”

And still, nerves dominated Miller’s first outing, where he admittedly nibbled and uncharacteristically walked three of the ten hitters he faced. After a David Bote home run led to a Cubs victory, Miller headed back to South Bend, continuing the work he’d started there on working a two-seam fastball into his arsenal. He’d get his second chance on September 5, again against the Cardinals, and pitched much more like himself.

“The first game I went in and I was trying not to be nervous. The second time going in, it was kind of like a ‘f*ck it’ mode, where I’m not going to overthink on the mound,” Miller said. “I’m going to go out there that day and do what Rossy needed from me which was get outs and eat some innings for the bullpen. And it went better, because the mindset was there.”

We of course can’t make too much of the 76 pitches that Miller threw in those two outings, but I did have some things jump out to me that he and I spoke about.

Miller began his Cubs career throwing in the low 90s, but in 2019, mostly succeeded despite a dip in velocity (an average of 89.9 mph for the season). So it was great to see Miller in the Major Leagues touch 95 mph three times, and average 93.3 mph with his cutting four-seam fastball.

“A little bit of adrenaline, but in South Bend in the games I was like [91-94],” Miller said. “So, for the most part, the velo kind of came back after spring training. The quarantine really helped, I think.”

In my opinion, this is so huge for Miller, as it opens up relief as a real possibility for him down the line (if necessary). He also got the most velocity from his new two-seam sinker, averaging 93.7 mph the five times he threw it. The idea of adding the pitch to his arsenal came once he was sent down from big league camp last spring, but quarantine began before he could receive much hands-on instruction.

“So I had to just kind of learn it on my own,” Miller said. “They were giving me some grips, but I was just throwing with Cory [Abbott] in the [spring] and trying to figure it out from there. So we worked hard on it, and when we got to South Bend they were saying they really liked it.

“How I grip it, the fingers are on the seams. It’s literally the feeling that if a pitch was grip it and rip it, that would be my pitch for that.”

This will be a key weapon for Miller moving forward, as it gives him a pitch to move arm-side, different from the cut he achieves on his fastball and changeup, and the glove-side movement of his breaking balls.

Willson Contreras was down with the Iowa Cubs on August 31, 2019, rehabbing an injury, when he caught Miller for the first time. Where Tyson had been throwing maybe eight or a dozen change-ups in normal outings, Willy called for about 35 that night, easily a career-high. And the game was also the only quality start that Miller posted with Iowa that year.

“After looking at that and seeing the soft contact, going back to the video you would see some of the hitters after they make contact look at the [stadium radar gun] and see it was actually 8mph slower than my four-seam and it just kept them off balance, [and] it had the same spin,” Miller said.

Sure enough, if we use Baseball Savant’s new tool on spin direction, you’ll see how similar his 4-seam fastball and changeup spin (he confirmed that Savant is mischaracterizing his change as a cutter): 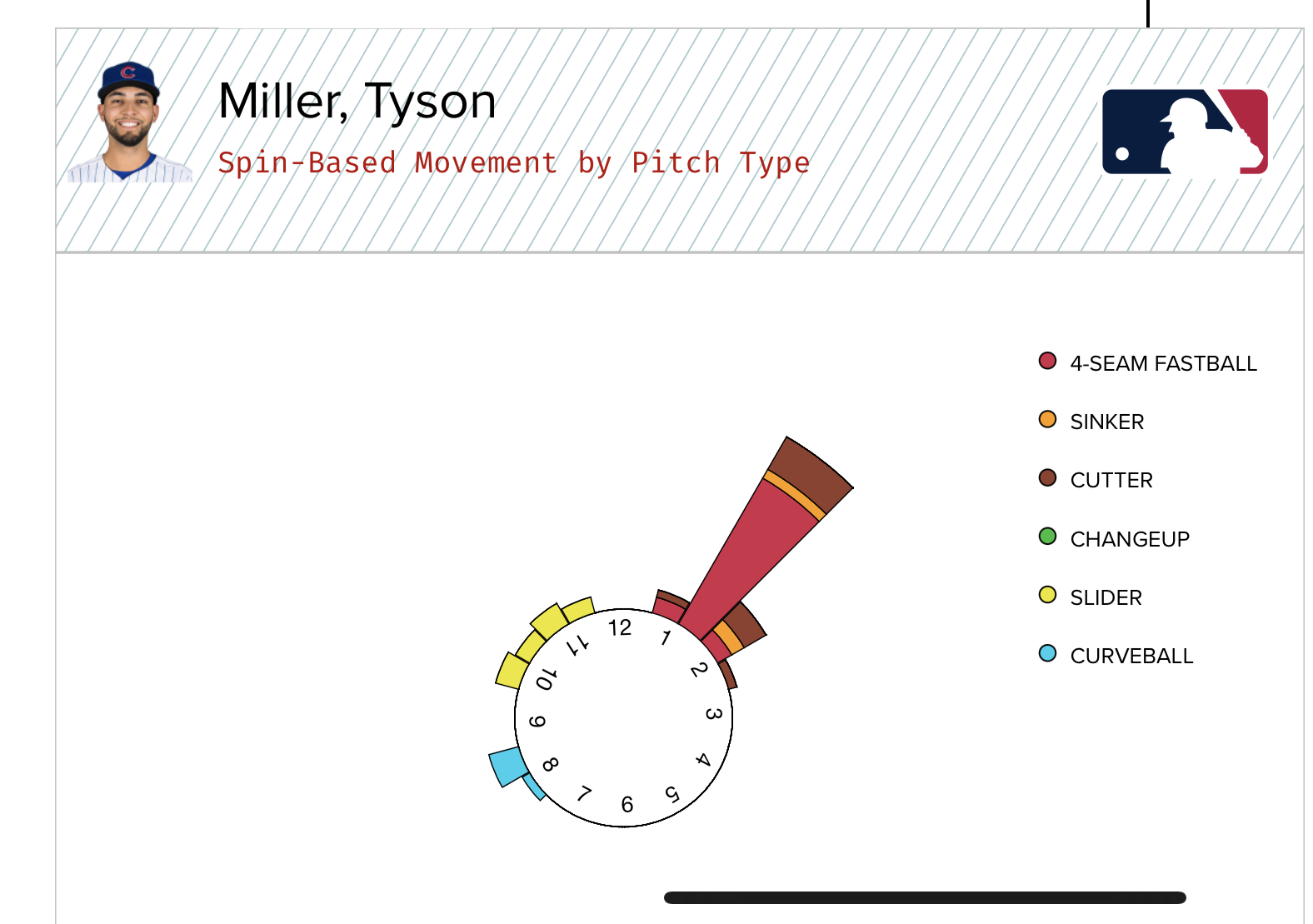 So while I might consider Miller’s slider his best secondary pitch, he wasn’t surprised that the changeup was his most used secondary in his five big league innings this year (even if it was Victor Caratini, not Contreras, who did the catching).

“I need a strikeout pitch, because I don’t have one yet.”

Tyson brought this one up as I asked what he took away from his Major League experience. In those five innings, Miller didn’t strike a Cardinal out, and he knows that getting whiffs will be essential for his career.

Expect this to be the focus for Miller in 2021, particularly how to maximize movement on a slider that spins at an above-average 2600 RPM. I’ve seen this pitch work better for him in the minor leagues than it did on the 10 times he threw it in the bigs, but there’s a consistency level that still has to be achieved.

“I feel like if they were more sharp, and I wasn’t as antsy throwing them as I was in the bigs, I would have a strikeout here or there,” Miller said. “They need to be more sharp.”

Part of modern pitching instruction is figuring out what makes a pitcher unique, what is different from what hitters usually see, and building a pitcher’s weapons around those skills. For Miller, two things really jump out to me:

The answer here is Tyson Miller, and you can kinda see it in this vid. The long extension makes perceived velo higher than actual. The low release height flattens his Vertical Approach Angle. Both will help play up his high FB, which has indeed always been a good pitch for him. https://t.co/vbk32AD5yq

Miller’s combination of elite extension and a low release height both mean the ball will get on hitters faster than they’ll initially realize. Generally speaking, you’d want a pitcher with his profile to throw up in the zone more often than Miller did during his stint. You’ll see in his four-seam fastball heat map from the bigs that his command was off, missing middle-middle instead of up, leading to a .463 xwOBA on the pitch. I expect the Cubs try and tighten Miller’s command of the high fastball, while also toying with using the two-seamer upstairs (as they have with other pitchers lately). 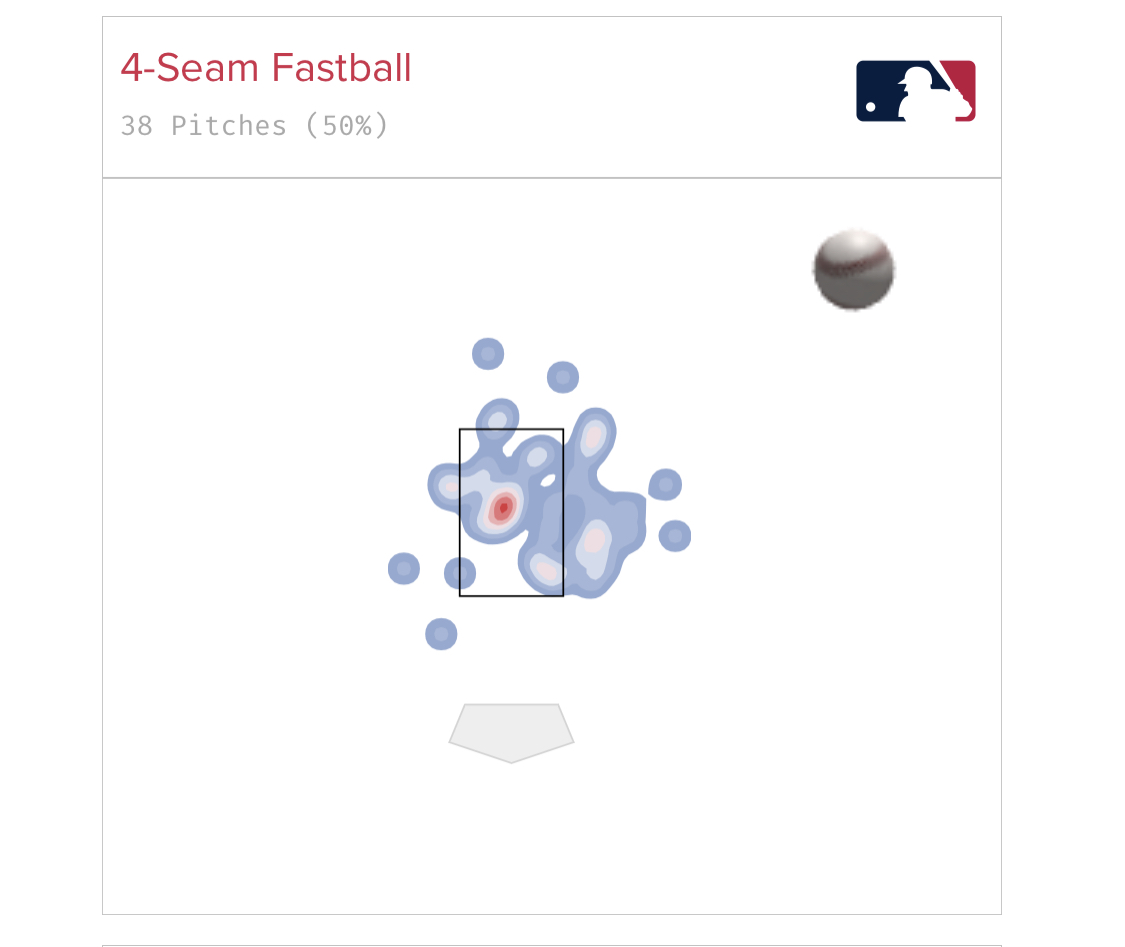 As we know, there’s a newfound urgency in Miller’s development, as he’s going to be a necessary depth piece on the 2021 Cubs. I know Tyson’s up for the challenge, and the story he told me about that debut performance speaks to how hungry he is to impress in front of the Wrigley crowd.

“After I was done in my debut, I came back out to the dugout to watch [David] Bote’s go-ahead homer,” Miller said. “Nico [Hoerner] and I were talking about how I was feeling, and I told him it hadn’t really hit me yet. He said, ‘don’t worry, when fans are allowed back whenever that is, it’ll be like a second debut.’ I’m excited to experience that.”