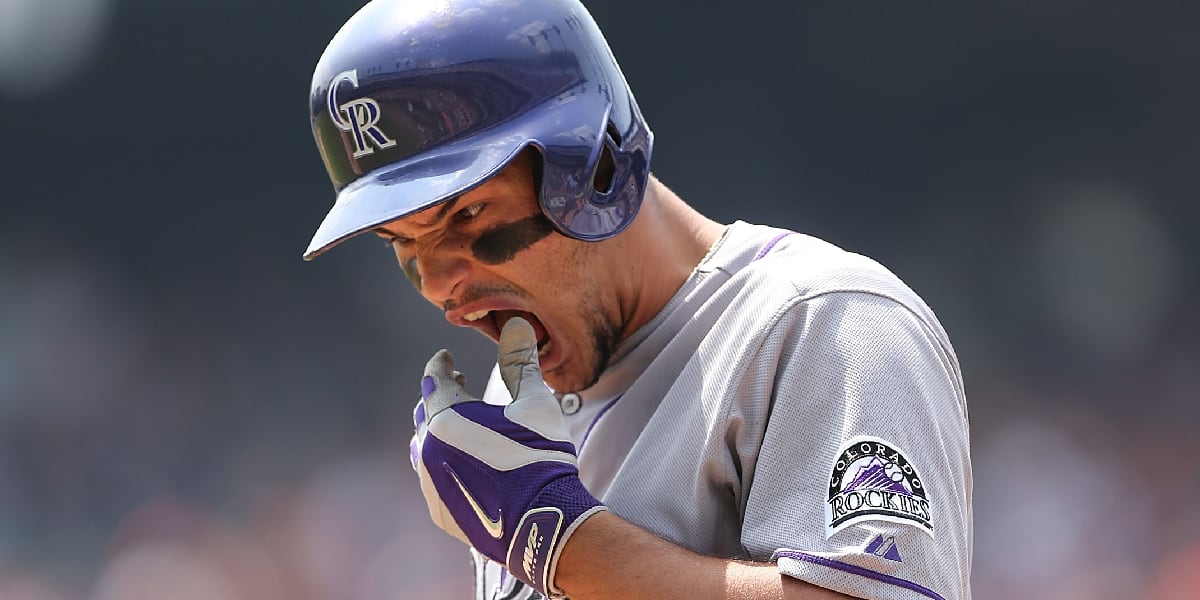 UPDATE: The new news goes at the top, because holy crap. It really is happening. The Cardinals are getting Nolan Arenado.

BREAKING: Cardinals have agreed to acquire Nolan Arenado from Rockies, sources tell @TheAthletic. Deal pending approval from both MLB and players’ union; Rockies sending Cardinals significant cash, believed to be in $50M range, and Arenado will be deferring money.

In theory, with that much cash included from the Rockies, you’d presume they are actually getting a good return from the Cardinals for a star player. But, since it’s the Cardinals, I’m going to guess that they’re giving up very little they’re going to miss, and now Arenado will become an absolute cornerstone superstar for the next six seasons in St. Louis. This suuuuuucks.

UPDATE 2: Rosenthal suggests the return could include some combination of LHP Austin Gomber, 1B Luken Baker, OF Jhon Torres, RHP Jake Woodford, and/or RHP Angel Rondón. I barely recognize those names, so that’s not a good sign.

The Rockies really, really wanted to give Arenado away. I mean, they're reportedly contributing $50 million, too.

So the Cardinals get Arenado on a six-year, $150M steal of a contract for … this? https://t.co/jxoi5lGNzt

UPDATE 3: The deal might not be completed for a bit, per Rosenthal, because the opt-out and deferral issues (including approvals from the league and union, as necessary) still have to be handled. No one seems to think there will be a serious hiccup, though.

UPDATE 4: So he’s deferring a whole lot of money:

If deal between Rockies and Cardinals is finalized, Arenado will keep his opt out after 2021, get an additional opt out after 2022 and retain his full no-trade clause, sources tell @TheAthletic.

I don’t like how this is trending, folks. It just has become one of those situations that feels like it has been put on the tracks – it’s not an unstoppable train quite yet, but it’s rolling.

The Cardinals are now “pushing hard” for Nolan Arenado, and they are “very determined”:

#STLCards are pushing hard for Nolan Arenado. Word is, they seem very determined. Still there are complications: He has no-trade, though he hopes for a contender. He also has an opt-out after 2021 season, and Cards surely would prefer assurance he’d stay longer.

Moreover, Cardinals President John Mozeliak was asked about Arenado today, and although he wouldn’t address a player on another team by name, man, the stuff he said seemed all kinds of cagey.

“There are a lot of rumors floating around the industry right now, and I imagine those things will probably continue,” Mozeliak told the St. Louis Post-Dispatch. “There’s not a whole lot I can add to those other than recognize that they’re out there, and in terms of what we’re doing, where we’re going, clearly spring training is right around the corner. As I mentioned a while back, I thought January would look a more like December. You saw a lot more player movement. Certainly some of the things you would have likely seen at the end of January will now roll in February ….

“As we stand right now, [our third baseman is] Matt Carpenter. In terms of addressing rumors or free agents, my stance is always the same. Once you go down that rabbit hole, you never come out. In terms of how we like our club right now – we like our team. But today is Jan. 29. There is still plenty of time to improve. Baseball’s a great industry, right? There’s always time to try and get better. Good news is we have time on our side.”

That’s barely even an attempt to squash this one, or even stay neutral. To me, that reads like a guy who is in deep, complicated trade talks. He knows it might not work out, because pulling off a deal with this many layers is really tough. But yeah, it’s clearly being discussed very seriously.

And as Heyman hears, the Cardinals really want to make this thing happen. Financially, the Cardinals can probably swing it as long as they don’t have to take on the full six years and $199 million on Arenado’s contract (particularly in 2021 – maybe that’s where they send out Carpenter’s contract). And if Arenado still wants out as badly as it seemed last year, then he’ll figure out a way to move that opt out.