As discussed, the Chicago Cubs now have just four full-season affiliates – the AAA Iowa Cubs, the AA Tennessee Smokies, the High-A South Bend Cubs, and the Low-A Myrtle Beach Pelicans – together the their rookie ball teams in Arizona and the Dominican Republic.

The new league and division structures appear to be strongly interested in improving geographic alignment, and that will mean a pretty different look for the Cubs affiliates’ divisional opponents: 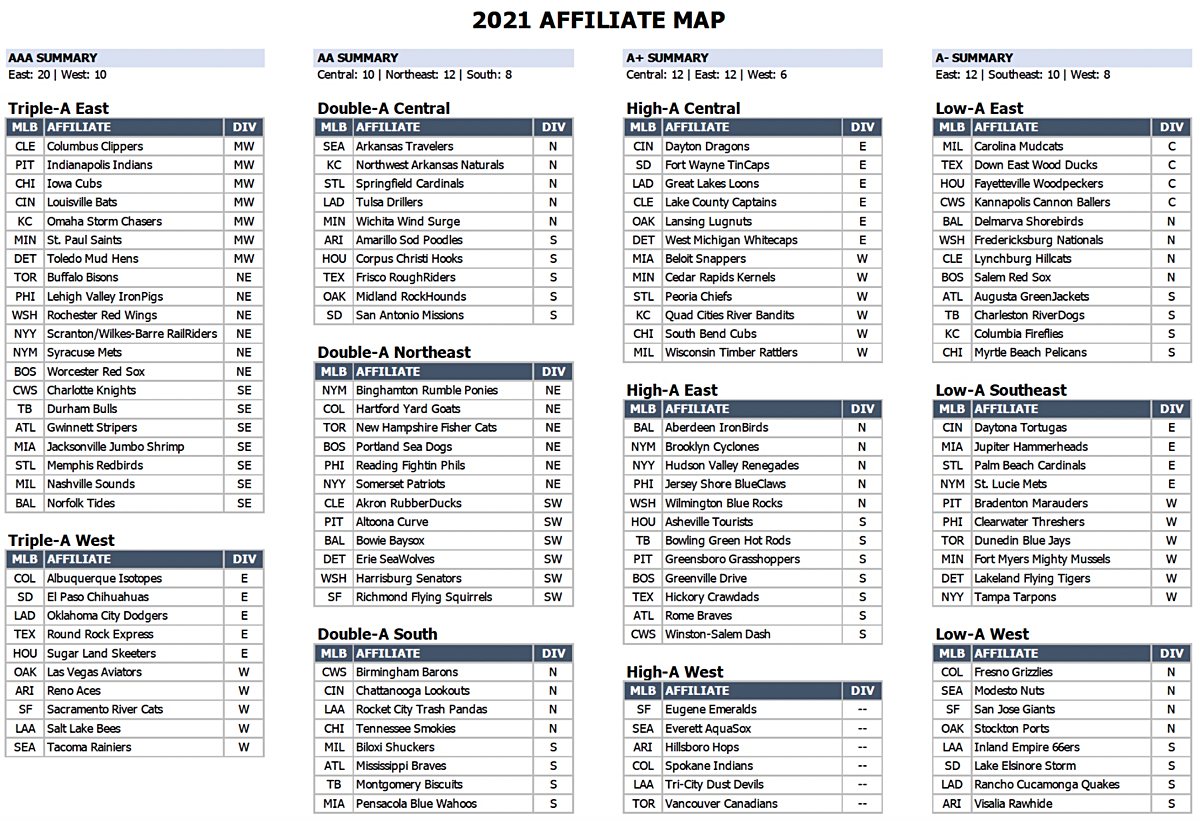 The Iowa Cubs, formerly in the Pacific Coast League, are now in a division that keeps them much more midwest-centric (including now hitting up cities like Indianapolis, Toledo, and Columbus, which I reckon will be well-received by Cubs fans in those areas (including this Cubs fan in Columbus (I am so there as soon as the Iowa Cubs come))). It’s not yet clear if all the teams in the Triple-A East league will play each other, or just the teams within their geographic region. If it’s the whole league, then, hey, folks in the east who’ve never had a chance to see the Iowa Cubs are in for a treat.

Elsewhere, the Tennessee Smokies are in a division with the Trash Pandas, which is just great news. Also great news is how geographically aligned the divisions are for the lower-level Cubs affiliates. Again, there might be travel outside of those smaller divisions, but if most of the games are played in-division, that will dramatically cut down on travel time for players. That’s not just a good thing in a pandemic, but it’s a quality of life thing for the players.

Baseball America has a bigger write-up on all the changes for Minor League Baseball, and indicates we should expect schedules next week:

It's now official. The most significant change ever in the structure of the minor leagues is complete, as MLB has announced it has 120 signed PDLs. MLB is now running the minors. What it means: ($)https://t.co/dpnA878S24

As expected, the AAA level will start its season first in early April, while the three lower leagues are expected to start in May.

More in the official release:

All 120 Minor League Clubs offered an invitation to become Professional Development League license holders have officially agreed to accept. The teams will be part of a new model aimed to better serve fans, players & Clubs. pic.twitter.com/KEg5PcGgZa