Today, the Chicago Cubs announced their minor league managers, coaching staffs, and coordinators for the 2021 season. The official team releases are included below.

What’s most notable is the manager announcement, which appears to confirm that the Cubs are indeed contracting down to just one rookie league team in each of Arizona and the Dominican Republic. Previously, the Cubs had two of each. With the draft shrinking (dramatically last year, and less dramatically – but still shrinking permanently to something like 10 to 20 rounds), you can see why a second stateside rookie league club might not be necessary or fill-able in the current setup. Nevertheless, I’d hoped the Cubs would still see it as a possible edge, especially in the Dominican Republic where signings are not necessarily as limited internationally. Maybe all teams are doing this? What was going to happen at the rookie level was never as clear as what was happening in the full-season leagues (every organization now has just four total full-season teams).

In the coordinator announcement, the big news is the reveal of a new minor league hitting coordinator: Dustin Kelly, who comes over from the Dodgers’ organization, where he was a hitting coach for the last three years. That could be a major move when we look back in hindsight, as Chris Valaika was very well-regarded in the role for the last couple years, but got the bump to the big league staff as the assistant hitting coach.

Marty Pevey returns for his 13th season in the organization and his ninth as manager of the Iowa Cubs. He brings with over 30 years of professional experience, beginning with 13 years as a player. In 2019, he guided the Iowa Cubs to their first postseason appearance since 2008, and his 479 regular season managerial victories with Iowa are a franchise record.

Mark Johnson enters his 11th year in the Cubs system and returns to manage the Tennessee Smokies after doing so from 2016-18. Johnson, who will also serve as minor league catching coordinator for the third-straight year, has eight seasons as a minor league manager. He earned a Midwest League title with Single-A Kane County in 2014 and a Carolina League title with Single-A Myrtle Beach in 2015. Johnson played 17 seasons (1994-2010), including 332 major league games with the White Sox (1998-2002), Oakland (2003), Milwaukee (2004) and St. Louis (2008).

Michael Ryan will manage the South Bend Cubs after joining the organization as Tennessee’s manager in 2020. Prior to that, he spent seven seasons as a manager in the Pirates chain, including 2017-19 at the helm of Double-A Altoona. He led the Curve to the Eastern League championship in 2017, the first of two-straight campaigns with Western Division titles. The former outfielder played 149 major league games with the Twins (2002-05) and Angels (2010).

Buddy Bailey will return to manage the Myrtle Beach Pelicans and is in his 33rd season as a minor league manager. He managed Single-A South Bend in 2019 following three campaigns as manager for Myrtle Beach from 2016-18. Bailey owns 2,140 regular season victories, and in 2017 became just the 11th minor league manager to reach the 2,000-win plateau.

Lance Rymel is in his sixth season as a coach or manager in the Cubs organization and will guide the Arizona Rookie League Mesa Cubs team. He managed Single-A Eugene in 2019 following two seasons at the helm of the Cubs Dominican Summer League squad in 2017-18. He began his coaching career in 2016 as Mesa’s rehab coach following a three-year minor league playing career as a catcher in the Cubs chain from 2012-14.

Carlos Ramírez enters his third season as a manager for the Cubs Dominican Summer League team, and his sixth season as a coach or manager in the organization. He was a coach for the Dominican League club from 2016-18 following three seasons as a catcher in the system from 2012-14. 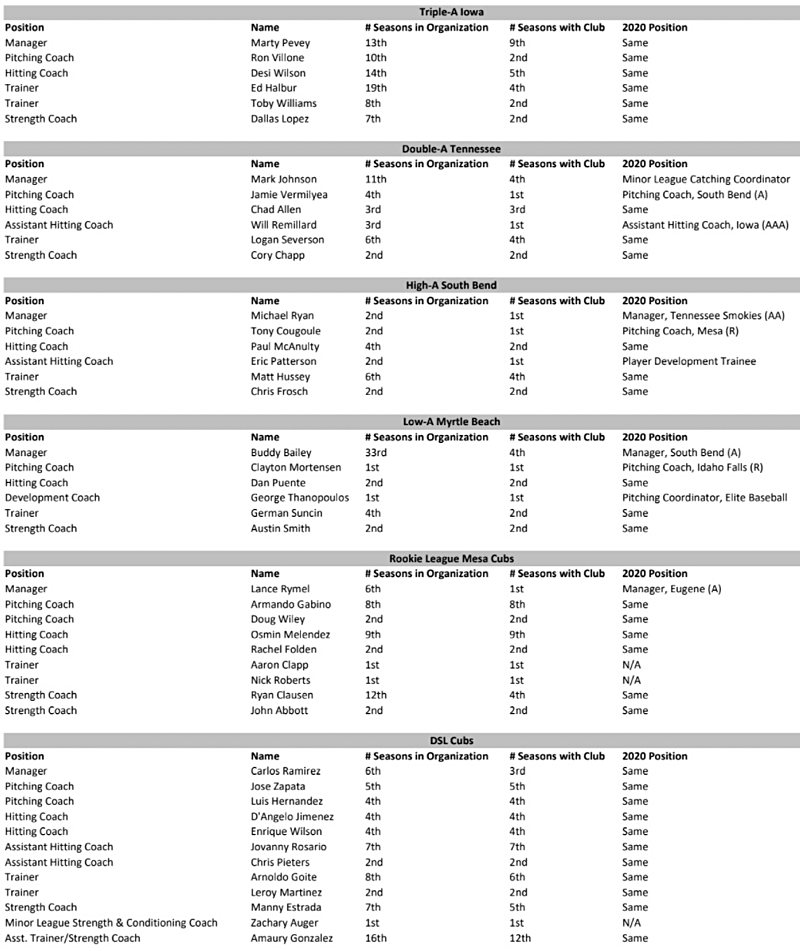 Jeremy Farrell returns for his sixth season with the organization and his second as assistant director, baseball development. Farrell will also handle minor league infield coordinator duties, a position he had in 2018 before being named field coordinator in 2019. He joined the Cubs as a hitting coach for Rookie League Mesa in 2016 after a seven-year minor league playing career with the Pirates (2008-12) and White Sox (2013-15). The former infielder was selected in the eighth round of the 2008 draft by Pittsburgh.

Dustin Kelly joins the organization as minor league hitting coordinator after three seasons as a hitting coach in the Dodgers farm system from 2018-20. The last two seasons he was hitting coach for Single-A Rancho Cucamonga after handling hitting coach duties for Rookie League Ogden in 2018. Kelly was selected by the Boston Red Sox in the 15th round of the 2004 MLB draft from Cuesta College in San Luis Obispo, Calif., and played three seasons in the Red Sox farm system, reaching Double-A.

Casey Jacobson starts his second season as the organization’s coordinator of pitching development. He is a former instructor at Driveline Baseball in Kent, Wash., and in 2019 was an assistant coach at Augustana University in Sioux Falls, S.D., following five seasons as the pitching coach for Macalester College in St. Paul, Minn. The former pitcher began his collegiate playing career at St. Mary’s in Winona, Minn., before he transferred to Augustana for two seasons and then pitched for Roswell in the independent Pecos League in 2013. He graduated from Augustana University with a B.S. in Physics.

James Ogden begins his second season as the organization’s coordinator of pitching performance. He had a seven-year tenure as pitching coach for Lipscomb University in Nashville, Tenn., where he helped the team to the 2015 Atlantic Sun championship. He graduated from Lipscomb with a B.A. in Oral Communications with a minor in Health in 2008 and earned his Master’s in Education with an emphasis on Instructional Leadership in 2010.

Mark Johnson enters his 11th year in the Cubs system and will serve as minor league catching coordinator for the third-straight season while also returning to manage Double-A Tennessee. In eight seasons as a minor league manager, he earned a Midwest League title with Single-A Kane County in 2014 and a Carolina League title with Single-A Myrtle Beach in 2015 before he guided the Smokies from 2016-18. Johnson played 17 seasons (1994-2010), including 332 major league games with the White Sox (1998-2002), Oakland (2003), Milwaukee (2004) and St. Louis (2008).

Doug Dascenzo is in his seventh year as the organization’s minor league outfield and baserunning coordinator, bringing with 22 years of coaching experience. He played parts of seven seasons in the majors, including five with the Cubs (1988-92). He coached in the Padres system from 1999-2011, including six seasons as a minor league manager, before coaching in the Braves system from 2012-14, including third base coach for the big league team in 2014.

Dave Keller begins his 18th year in the organization and his seventh as minor league Latin America field coordinator. He brings over 35 years of minor league coaching and managerial experience, and managed three clubs to championship series appearances, including a Florida State League title with Single-A Daytona in 2013. The former first baseman played in the Reds chain for three seasons (1982-84) after Cincinnati selected him in the 28th round of the 1982 Draft.

Tom Beyers starts his 22nd season in the Cubs organization and his seventh as assistant coordinator, hitting. He joined Chicago in 2000 following 21 seasons in the Dodgers minor league system as a player, coach and manager. Beyers managed nine seasons in the Dodgers and Cubs chains, and he led Single-A Boise to a Northwest League title in 2004. Beyers, a former outfielder, was selected by the Dodgers in the 15th round of the 1979 Draft.

Steven Pollakov starts his second season as assistant coordinator, Dominican hitting analytics. He served as a hitting apprentice in the Houston Astros farm system in 2019, integrating technology and biometrics into hitting programs. In 2018, he served as catching coordinator in the Boston Red Sox Dominican Republic Academy. Signed as an undrafted free agent in 2016 by the Chicago White Sox, Pollakov is a graduate of Buffalo Grove High School in Illinois.

Mike Mason is in his 14th year in the system and his first as advisor to pitching development following two seasons as assistant coordinator, pitching. He brings with over 25 years of coaching experience and served as Triple-A Iowa’s pitching coach from 2008-13 after serving four seasons as the Royals minor league pitching coordinator from 2004-07. Mason played seven major league seasons with Texas (1982-87), the Cubs (1987) and Minnesota (1988), posting a 29-39 record with a 4.53 ERA.

Carlos Chantres is in his third season with the organization, and his second as assistant coordinator, pitching. The 2021 season will be his 16th as a coach, coordinator, or special assistant. Most recently, he spent the 2019 season as an assistant pitching coordinator.  He spent two years with Atlanta, including as a special assistant to player development in 2018, after stints coaching in the Tigers (2015) and Mariners (2016) chains. Chantres spent nine seasons coaching in the Yankees system (2006-14) after 12 minor league seasons (1994-2005) pitching with the White Sox (1994-2000), Brewers (2001), Devil Rays (2002) and Phillies (2004-05) organizations.

David Da Silva starts his fourth year as mental skills coordinator after nine years as a mental conditioning consultant for IMG Academy in Bradenton, Fla. He earned a Bachelor of Arts in Psychology from New Hampshire College/Southern New Hampshire University in 2000 and earned a Master of Science in Movement Science from Barry University in 2003.

Javier Guerrero is in his second season as mental skills coordinator and his seventh season in the organization. He spent 2018-19 as a minor league mental skills assistant following three seasons as a Dominican Republic video operations assistant. He graduated with a B.S. in Clinical Psychology from the Universidad Iberoamericana in 2006 and earned his graduate certificate in International Family & Community Studies from Clemson University in 2007.

James Edwards begins his first season as minor league assistant medical coordinator and his fifth in the Cubs organization. Last year, he served as the athletic trainer for the Double-A Tennessee Smokies. He was previously a trainer with Single-A South Bend (2018-19) and Single-A Eugene (2017), while also serving as an intern with the Arizona League Cubs in 2016. He earned a B.S. in Athletic Training from Aurora University and a M.S. in Exercise Science from California University of Pennsylvania.

Julia Long is in her second year as the head of sports nutrition and dietetic services, and in her seventh year overall with the Cubs. In this role, she supports players by educating them to use food as a strategy by providing the best food possible, along with training and physical support. Long earned a Bachelor of Science in Dietetics from Arizona State University in 2015.