So What Has Jake Arrieta Been Up to Over the Last Three Years Anyway? Skip to content

The last Cubs playoff game I attended was Game 5 of the 2017 NLCS against the Dodgers at Wrigley Field, which, if you recall, was the worst playoff game in the history of baseball and existed only to separate me from my money and happiness and body heat.

Jake Arrieta was making his final appearance as a Cub (or so it could have been), tossing 6.2 innings of 1 run baseball against the Dodgers at Wrigley Field, forcing a Game 5 while keeping our hopes at that delicious long-term #dynasty alive. Unfortunately, if you can believe it, that was the last time a Cubs pitcher won a playoff game.

Hard to believe after the way everything came together in 2015 and 2016, but Jake Arrieta is the last pitcher to win a playoff game for the Cubs (Game 4 of the 2017 NLCS).

After that, Arrieta and the Cubs went their separate ways, with the Cubs choosing free agent Yu Darvish on a six-year, $126M deal over Arrieta, who ultimately signed a three-year, $75M deal with the Phillies.

Since this really did feel like an either/or choice, let’s take a quick look at their salaries since 2018:

NOTE: Darvish ($23M) will make considerably more than Arrieta ($6M) in 2021, and is still owed an additional $39M over the next two seasons.

Arrieta was much more valuable than an injured Darvish in 2018, but Darvish was much better in 2019 and nearly won the Cy Young award in 2020. Arrieta, meanwhile, made $75 million across his three years in Philly and Darvish made $67 million. They’re both 34-years-old, but there’s no reasonable expectation that Arrieta will outperform Darvish in 2021. What that means for 2022 (or the Cubs’ decision at that time) is beside the point. It just all felt like important background information to lay the foundation.

Now that we’re all caught up on the history, let’s actually see what Jake was up to during his three-year East Coast sojourn, in advance of his reported return to the Cubs. 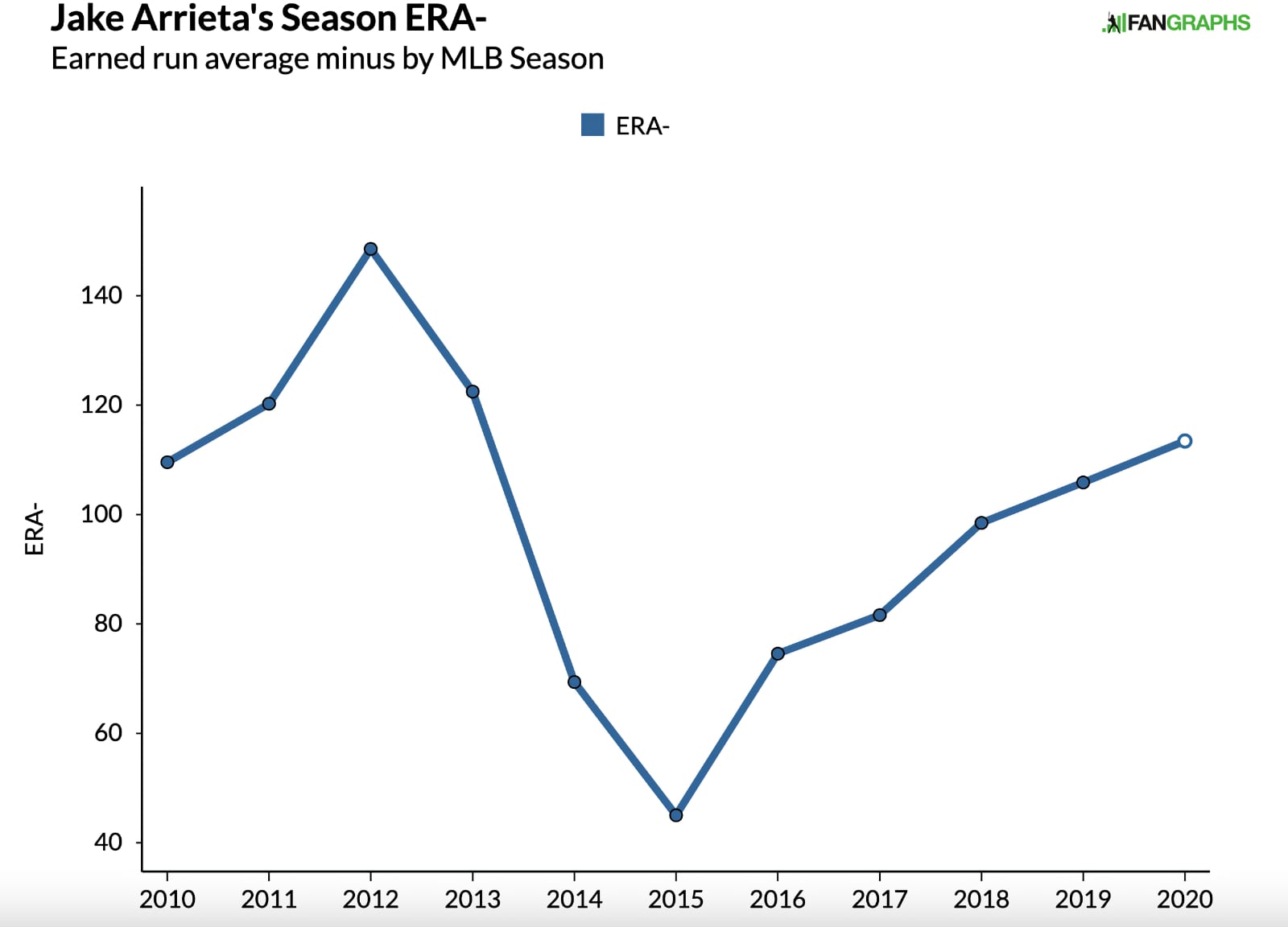 ERA- measures a pitchers earned run average the league-average pitcher for that season while including park factors. So as you can see, Arrieta became increasingly worse than the league average pitcher at preventing runs from 2015-today.

And, sure, no one expected him to keep pace with that absurd 2015 season, when he was arguably THE most dominant pitcher of all-time, but after solid performances in 2016 and 2017, neither of which were far off from his upswinging 2014 season, Arrieta endured a steep decline in 2018.

But it wasn’t all bad!

For example, that “steep decline” in ERA- actually still landed him about 2% better than the league average pitcher. And there was some really nice batted ball data, too: Arrieta’s 51.6% groundball rate was a big step up from 2017 (45.1%) and close to his peak years in Chicago/above his career average. He also generated more infield fly balls and lowered his hard%. Statcast expected him to be have a little less success than he actually did enjoy overall, but not by much.

So, yes, 2018 was a far cry from the Arrieta of old, but it wasn’t a terrible year for him all things considered. A league-average performance over 170+ innings is still a valuable thing.

This is when things really started turning for the worse, thanks in no small part to a couple injuries and surgeries. An offseason MRI of his left knee led to pre-season surgery in January. And in August, Arrieta underwent season-ending surgery to remove a bone spur in his right pitching elbow. Altogether, he made just 24 starts that year, with only 135.2 innings pitched. And for the first time since 2013, Arrieta was worse than the league average pitcher in terms of run prevention (106 ERA-).

The batted ball data, which was previously holding up his numbers, started to deteriorate, as well: His groundball rate stayed elevated (in fact, his average launch angle declined sharply, which is a good thing), but batters were making much harder contact overall (average exit velocity up) much more of the time (hard% up). Once again, Statcast projected a slightly worse performance than we actually saw on the field. So if anything, he was outperforming expectations, which isn’t usually a good sign moving forward.

The 2019 season also provided some confirmation on a pitch-mix transition that may have already started 1-2 years prior, but really picked up steam with his new organization.

There’s more to it than changes to just these two pitches, but this was the biggest tradeoff in his arsenal. The Phillies must’ve been a little spooked by the velocity drop in his sinker from 2016-2020 (about 2 full MPH) … or maybe it was to help mitigate against injuries, but they went changeup heavy from there on out. This is one of the things I’m most interested to track once he’s back in the Cubs organization.

It’s a small sample, so I guess you have to make sure to keep that in mind throughout this discussion, but 2020 was the worst season on Arrieta’s record since TWO years before he came to Chicago. And even that rough 2012 season (6.20 ERA) was underscored by a dramatically better FIP (4.05). In the small sample that was 2020, everything went wrong for Arrieta.

Arrieta’s strikeout rate plummeted even further down the boards (he had the 15th worst K%+, striking out 29% fewer batters than the league average pitcher), his hard% increased, his line drive rate increased, and so on. Statcast even pointed out that his .292 expected batting average allowed was in the bottom-8% of the league. Ouch. Needless to say, his .348 expected wOBA is his worst mark in the Statcast Era.

Not to pile on, but I did just stumble on another thread to pull: In 2020, batters swung at fewer pitches out of the zone while making more contact with pitches in the zone than they ever have in his career.

The “best” news, as far as I can tell, is that his walk rate and groundball stayed level (and in a good tier), but that’s about that. It was not a good year, which ended early thanks to a hamstring strain.

… So is there any reason to be excited for Jake Arrieta in 2021?

Of course! Perhaps the Cubs can tweak that pitch mix or keep him healthy or adjust his mechanics to help him beat those unkind ZiPS projections (4.80 ERA, 5.06 FIP; 114 innings). But just be prepared for much of his value to come in indirect ways.

Even if he isn’t anywhere near the top of his game, the Cubs *will* need a lot of innings covered this season, and we know he’ll work hard to be out there and stay out there as much as possible. That’s who he is.

The Cubs are moving towards a much younger and inexperienced rotation, without Jon Lester or Yu Darvish around to show the kids what to do and how to do it. There is likely no better role model out there than Arrieta, who has always made his health and fitness a top priority. He’s also incredibly competitive and can help a young rotation learn what to do.

In a sense, I don’t care what happens with Jake on the mound this year. I needed this. We have said goodbye to SO MANY people over the offseason, from the dugout, to the front office, to the field. Bringing Jake Arrieta back is fun and this is supposed to be fun, remember? And can you just imagine if the Cubs *are* able to retake this division? The thought of Arrieta starting another playoff game for the Cubs is downright titillating. He’s already the last Cubs pitcher to net a playoff win. What if he’s the next?

And there is upside!

Like I said, if Arrieta is healthy, and if a couple tweaks here and there in a new (old) organization can help, it’s not as if the Cubs are signing him to a $6 million deal for no reason. They believe he can improve on the last couple years. Even as a league-average performer, which is within reach, Arrieta could provide a great deal of value to the Cubs.