MLBits: Tatis Might Give Up Part of His Extension, Brewers Decent Additions, Darvish's DH Idea, More Skip to content 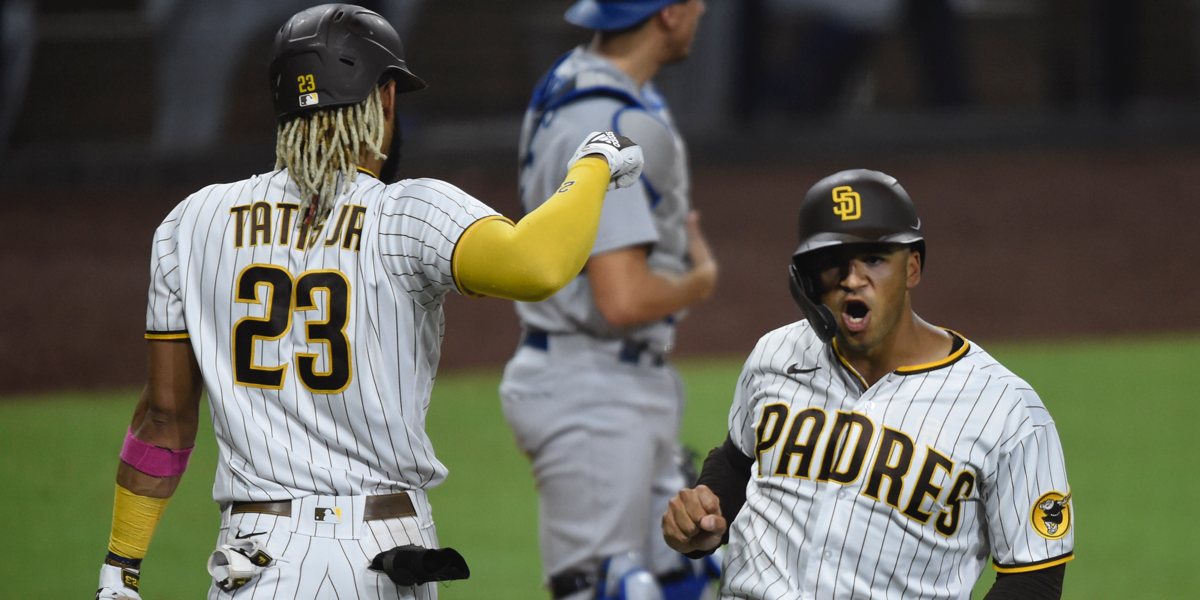 Reminder: Today is the deadline for arbitration hearings, of which the Cubs have exactly one outstanding (Ian Happ). If you recall, Happ, who was the team’s best position player in 2020 (and also the union’s player rep for Chicago), filed for $4.1 million while the Cubs countered at $3.25 million. There will be no middle ground today – an arbitrator will pick one number or the other.

On and off the field, Happ has earned the raise, and I think we all know how important it can be to keep your best players happy. Of course, maybe the fact that they didn’t already settle somewhere in the middle is frustrating enough. It doesn’t seem wise for a major market organization to squabble over less than a million dollars (even less if you consider what a compromise could’ve looked like). Alas.

Tatis Might Be Giving Up a Chunk of His Extension

Fernando Tatis, Jr. (a.k.a. MLB’s FACE of the day) signed a mega-extension with the San Diego Padres worth $340 million over the next 14 years. It’s one of the largest deals in baseball history and he’s just 22-years-old! In my opinion, it was totally worth for both sides. Tatis may be leaving some money on the table and the Padres may be at risk for jumping the gun … but that’s why it makes sense. The Padres get to keep Tatis for $340M instead of potentially, what, $450 million? And Tatis gets to secure truly, game-changing/life-changing, generational wealth forever. Given that he’s not just GREAT but he’s also MARKETABLE, I think San Diego will be just fine with this deal.

But there is a but – unrelated to the merits of the agreement and Ken Rosenthal has the story at The Athletic.

When Tatis was heading into Double-A for the first time as a 19-year-old, he signed a deal with this company that provided upfront cash for a percentage of his future earnings. Generally speaking, it seems these deals acquired 1% of future earnings for every $50,000 paid upfront. So, if Tatis chose 10% (which appears to be the maximum), he would have received $500,000 a few years ago … but now be forced to forfeit $34 million of his new $340 million deal.

But before you get angry at the company, consider how Tatis used the money. According to the article, he used it to hire a personal trainer, eat better food, and get a better apartment. He also upgraded his training regimen in the US *and* his offseason practice field in the Dominican Republic. So while it is a bummer that his TEAM didn’t already provide those resources for him, forcing him to make this deal in the first place, maybe the deal was still worth it? What if the only reason he became the player he is today was because of those lifestyle changes when he was a prospect? And remember, at the time of his deal he wasn’t FERNANDO TATIS JR. … he was a guy the White Sox were willing to trade as part of a deal for James Shields.

So I get the urge to hate on this, but, hey, the guy got good, he got paid, and I doubt he regrets it too much with a healthy $300+ million left (well, minus taxes and fees).

But again, my biggest takeaway is the apparent competitive advantage smart front offices could deploy here. If you treat your minor leaguers right (pay them more, house them, feed them, train them, take care of them), they might just pay you back 10-fold in the future, so to speak.

The Cubs were just voted one of the most unimproved teams in the National League, which is a weird way of forecasting performance, but I get it the intention. As Brett explored, they definitely didn’t get any better this winter, but they did make a lot of lateral moves, which, on paper, could leave them about where they were heading into 2020 (when they won the NL Central).

In any case, the Cubs received 12 votes for most unimproved NL team, but the Brewers received three, too – having added Kolten Wong, brought back Brett Anderson and Travis Shaw (hold that thought), and, most recently, signing formerly effective reliever (and one-time Cubs target) Brad Boxberger to a minor league deal:

Boxberger, 32, hasn’t quite been himself since leaving the Rays back 2017, but he did get results in limited duty last season (3.00 ERA over 18.0 IP), in part by dramatically improving his ground ball rate/launch angle allowed while getting back some legitimate velocity (he added more than 2 MPH to his fastball and 3 MPH to his slider).

Basically, don’t sleep on that addition. Who knows? Maybe he’ll gift us another classic back-to-back moment:

As for the other two re-new Brewers, FanGraphs explains how an improved infield defense (in large part thanks to the addition of Kolten Wong at second base) can disproportionately help a contact-oriented pitcher like Anderson, while Shaw, 30, helps fill out the roster on a team with which he has had some success in the recent past.

And while I hate to say it, I can’t help but give the Brewers front office credit. They routinely assemble a better than the sum of their parts roster on the cheap. It never looks good upfront, but always seems to be when the final pitch is thrown. Kudos.

This was a little shocking to learn. I’m not sure I realized it.

The starting pitcher market was so hot early on (particularly in trade) – and so many other player were getting unexpectedly solid free agent deals (relative to COVID-crunched budgetary expectations), so the lack of big-money/long-term starting pitcher free agent deals escaped me. If I had to guess, some guys could have gotten longer guarantees/more money, but preferred the pillow-contract structure to see if they could get more next offseason, when budgets should be even looser.

You know, assuming the CBA negotiations don’t lead to a lockout …

There’s no universal DH this season, though it could still come after 2021, but Yu Darvish has come up with a funny alternative that wouldn’t really solve any direct problems, but feels worth sharing nonetheless:

Yu Darvish said he wishes there were a rule that allowed pitchers over the age of 34 to decide whether they want to hit for themselves or not. He said he came up with the idea before bed. Personally, he would like to watch someone else hit.

Hey, maybe this will help older pitchers get deals, right? Because the more starters over 33/34-years-old you have, the more often you can deploy a DH!

Oh, and while we’re on the topic, just an FYI:

Oh, hey, reminder (now that there is no DH in the National League this year): Jake Arrieta is not quite the hitter he was when he was with the Cubs.

Everything About the 2021 MLB Season

This will just have to be your homework for the day, as Jeff Passan has 4,400 words on the 2021 season, touching on just about every single angle imaginable, with a little taste of the goods in the tweet below:

Pitcher and catchers report today, and I've got 4,400 words on the 2021 season. Recapping the winter, vaccines, fans in stands, Dodgers vs. Padres, gambling tips, breakout hitters/pitchers, why Dec. 1 is so important — all in 20 Questions, now on ESPN+: https://t.co/gLYd6lf9qM pic.twitter.com/nSNJ42HgiG