With Chicago Cubs position players officially set to report to Spring Training this weekend, Anthony Rizzo – no hair! – is getting in some final hacks before heading out to Mesa, Arizona.

No, Anthony Rizzo was not very productive at the plate in 2020. And, yes, he’s a year older, with longstanding back issues that seem to pop up at the exact same time every season. But as far as I’m concerned, there is no reason to believe he won’t bounce all the way back in 2021, perhaps as one of the top offensive first basemen in MLB.

Frankly, I’d be willing to do this entire post without using a single number – that’s how completely I believe in Anthony Rizzo’s offensive abilities and how little stock I put in his numbers during the COVID-shortened 2020 season – but the underlying data is plenty strong, so let’s give it a look.

But right off the bat, Statcast would tell you that his .222 batting average was FAR too low based on the underlying quality of the contact he made, with something closer to .266 actually expected. That change, alone, pulls his expected wOBA from .321 up to .339. That would’ve placed him somewhere between 15-20% better than league average in 2020 – still below his best seasons in Chicago, but also a huge step forward from where he actually finished the year (103 wRC+).

Getting a little more granular, Rizzo’s 11.5% walk rate was right in line with his 2019 figure (11.6%) and above his excellent 11.2% career mark, while his 15.6% strikeout rate follows suit (14% in 2019, 15.8% for his career). And when you dig into his plate discipline, you find that he swung at almost the exact same number of pitches out of the zone as always and actually made even more contact on pitches in the zone than he ever has in his career. There’s no reason to believe his pitch recognition or contact skills have deteriorated just yet, or that 2020 was a sign of anything at all.

If anything, he’s actually improving at a time when the rest of the league is moving in the other direction. 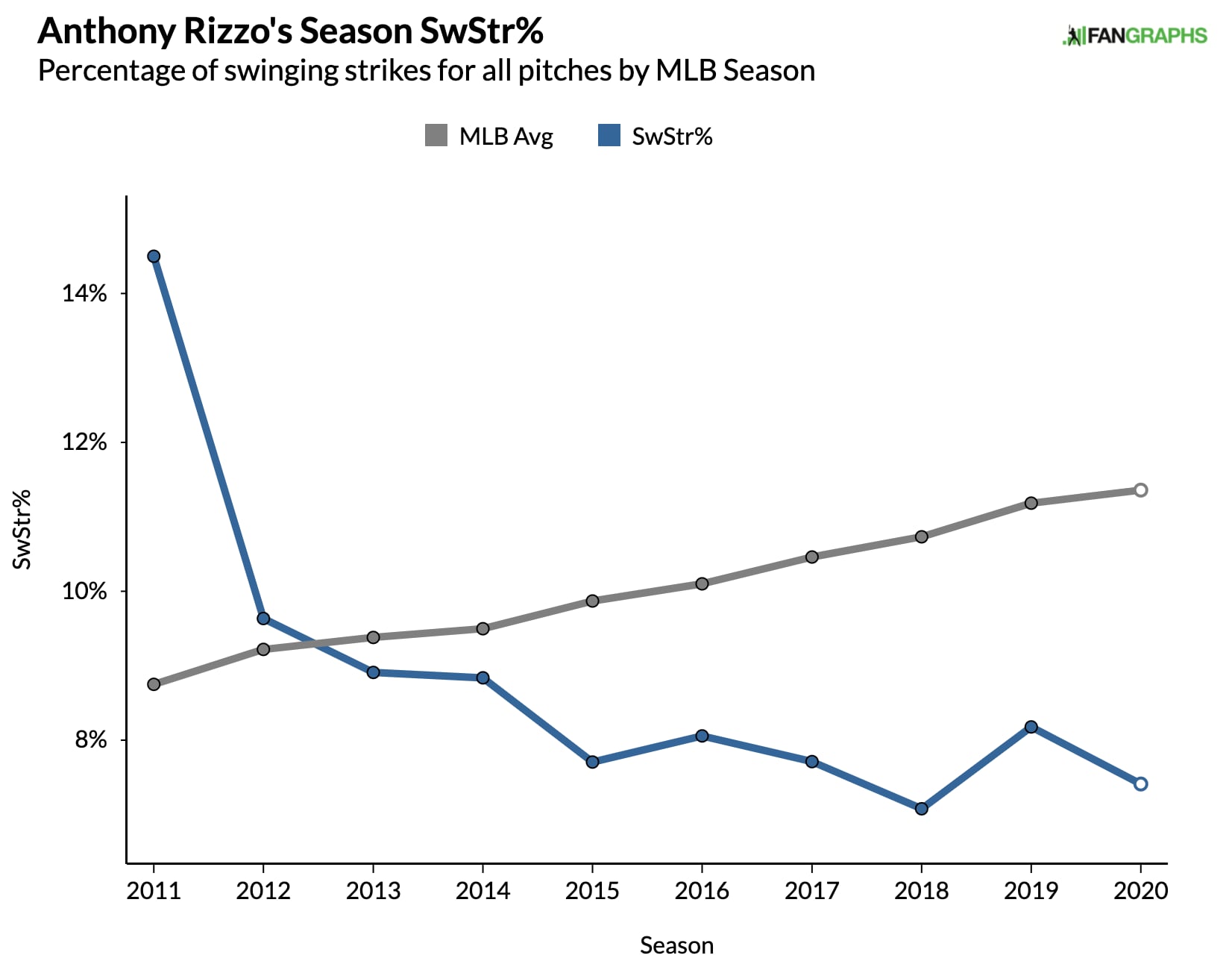 On the one hand, Rizzo’s 87.7 MPH average exit velocity was his lowest mark in the Statcast ERA, but he’s never been much of an exit velo guy during his time in the league, despite the obvious power.

I’m not saying that’s an insignificant drop – his 34.7 hard% was also lower than his 38% career mark – but I do think the combination of a shortened-season and the fact that his barrel% was actually up over his career mark does provide room to dismiss concerns here. Also, Rizzo was 30 years old last year. Not 40.

But I’m not betting it all on hopes and dreams – there’s a reason Rizzo’s expected Statcast data was strong.

In addition to his impressive barrel rate, Anthony Rizzo’s 24.2% line drive rate in 2020 was above his career mark (22.0%), ranking 27th in MLB, just one spot behind Mike Trout. He did pull the ball a little too much (which hurts him more when teams are over-shifting), but both his soft% and ground ball% were down, his launch angle was way up, and his .218 BABIP was WAY below what you’d expect to see from him in a normal year.

Cliff notes? Anthony Rizzo was an above-average hitter in 2020 as is, but according to the underlying data, his production should have been about 15-20% better than league average. So right there, any concern about the meaning of 2020 should probably melt away. But even with that in mind, I’d expect him to bounce further back in 2021. The oddities of last season, the quality of the contact data, and his consistent approach at the plate provide more than enough reason for optimism. Throw in great leadership in the clubhouse and a Gold Glove first base, and Anthony Rizzo will be an invaluable member of the team (again) in 2021.

Maybe the Cubs should consider, you know, keeping him around for more than 2021 …