Were the Cubs Too Patient at the Plate? Hoerner's Kick Save, Miller's Extremes, and Other Cubs Bullets Skip to content 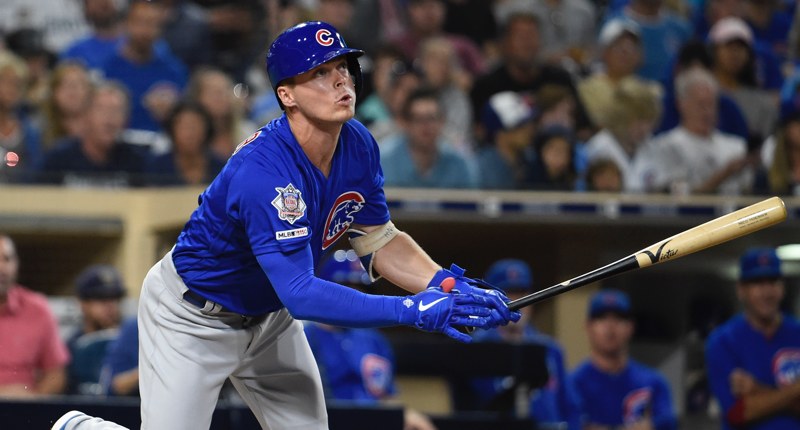 Well, it’s March again. There is no mystically bad power in this month, so I’m not gonna dwell on the fact that last March was when it all fell apart. I’m just gonna hope that maybe, maybe we’ll look back at this March later this year and see that it, too, was a significant turning point.

•   There really aren’t too many “competitions” in Spring Training this year for the Cubs, as most spots are locked down, and even in the rotation, you know that everyone is going to get their starts even if it doesn’t look precisely like a clear starting five for the whole year. Basically, you’re looking at the bullpen competition, the 25/26-man bench spot competition, and the second base competition. Ideally, you *don’t* have too many competitions in Spring Training, because it’s not an ideal time to be sorting out real, meaningful regular season playing time. Mostly, you want to know who you expect to have a certain job, and then you just want to confirm in Spring Training that they look and feel good to go.

•   So, anyway, with the second base competition, I still don’t know how much Spring Training performance should inform the decision. If the Cubs feel VERY STRONGLY that Nico Hoerner’s bat can develop and not be stunted at the big league level this year, then he should get the job. If the Cubs, however, feel at all that Hoerner would benefit from some time at AAA Iowa, then they should not risk his long-term offensive development for his near-term glove. At that point, you can coordinate between David Bote and Ildemaro Vargas, and maybe give someone like Matt Duffy an outside shot to compete.

•   As for Hoerner, he knows his offensive will have to come along if he’s going to be the everyday starter at second. In that article, he references getting too “defensive” at the plate, which is interesting. A challenge for guys with Hoerner’s profile is to become a little less aggressive early in counts on pitches they cannot really drive, so it’s not just about attacking early. You definitely do want a guy like Hoerner – heck, almost any hitter – to attack drivable pitches early in the zone, though, and his 4.15 pitches per plate appearance was well above league average (3.97). So maybe he was being a little too patient and then defensive? As a team, the Cubs were up at 4.11, which was the third highest in baseball. Generally, you do want to see pitches … but you want to do it organically as part of a selectively aggressive plate approach. If you’re just taking pitches to take pitches, you’re going to put yourself needlessly in a bad spot too often.

•   The most enjoyable highlight to come out of Cubs camp so far was a Hoerner play yesterday, initially misplaying a grounder before quickly recovering to kick it over to first for the out:

Kick save for the out. “That’s sick!” pic.twitter.com/NEuFknQs7l

•   Hoerner was clearly trying to give himself a … leg up … in the competition. (YEEEEAHHHHHH!!!)

•   That play was good, by the way, but it wasn’t as good as one of my favorite minor league plays of all-time, courtesy of Myrtle Beach Pelicans pitcher Javier Assad:

•   Over at Cubs Insider, Brendan Miller digs deep on something Bryan has mentioned a few times: Cubs pitching prospect Tyson Miller is kind of a freak in terms of where he releases his pitches. Miller releases his pitches EXTREMELY wide and EXTREMELY low, and he also gets EXTREME extension. So not only does that mean – for example – that his fastball is coming in at guys on a plane they aren’t used to facing, it also means the perceived velocity on his 93/94 mph fastball is closer to 95 mph. I love guys who do things at the extremes.

Here’s his release point in action. Notice how Miller sets up on the far right part of the rubber. And look at those long levers. pic.twitter.com/mvi8Q19lqu

•   Also, on Miller: there’s a reason he was one of the first call-ups last year for fill-in starts, and he only waned a bit on our radars because of his post-promotion struggles at AAA Iowa in 2019 – the year they were using the super ball baseball. After dominating at AA, I’m sure it just totally messes with a guy to get promoted and have the ball fly like that, especially when your approach angle *clearly* makes you a great candidate to try to induce fly balls (no surprise: Miller has been an extreme fly ball guy in his minor league career).

•   Historic moment for the Blackhawks and Patrick Kane:

There it is!! #400 for Patrick Kane!! pic.twitter.com/CgV8tKWyZc

Patrick Kane's 400th goal was always gonna be awesome, but it was nasty too! pic.twitter.com/aw2m9SaVKO