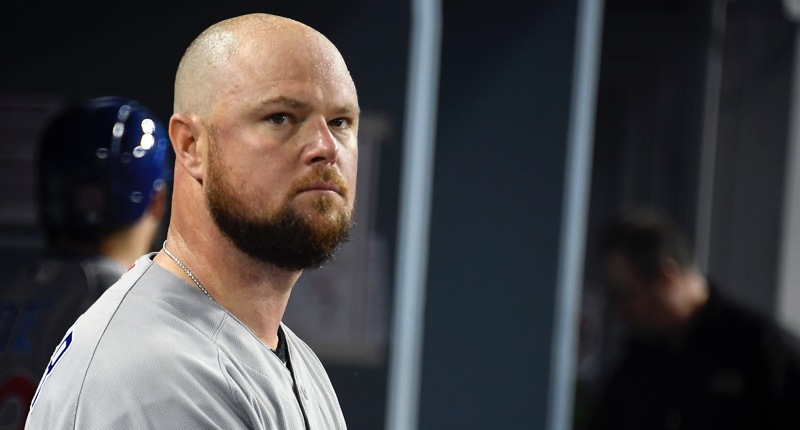 Fun 24 hours of Cubs stuff, eh? We got to watch our first live Cubs action since October, then there was a Cubs-Yoenis Cespedes rumor, and finally, the team signed Eric Sogard. They are things!

Now let’s check in on MLB …

In 2006, Jon Lester was diagnosed with lymphoma, went through chemotherapy, and has been healthy ever since. But earlier this spring, he told Nationals coaches/doctors that he was feeling tired and the doctors discovered a thyroid issue.

Now, he’s left camp for New York to have his thyroid gland removed:

Jon Lester has flown to New York to have surgery to remove his thyroid gland, Davey Martinez reveals. Nationals apparently knew for a while this could be an issue, decided to take care of it now. Martinez believes he could be back pitching in a week.

Thankfully, everything seems to suggest a quick recovery. Like, very quick: “Hopefully he can pitch again in about a week,” Nationals manager Dave Martinez said. “We want him to get it taken care of now, so it’s not an issue.”

According to Martinez, the Nationals are still fully expecting Lester to be ready for Opening Day, which would be a big relief. I hope that Lester is healthy and happy, and everything from this turns out all right. He is a Cubs legend, whose contributions to this team and city are immeasurable, and more importantly, he’s a good guy.

Whether or not the 2020 season counted as a full year (with respect to Minor League options) is a HUGE outstanding issue facing certain teams in MLB – including the Cubs. Generally speaking, players have three option years (sent freely up and down from the minor leagues), but some players qualify for a fourth option year. Because of the pandemic-shortened season in 2020, it’s been an open question how the fourth option year would be impacted, and it’s now in the hands of an arbitrator, per Derrick Goold. A decision could come mid-March.

If the decision lands one way, the Cubs could hold one more option year on rotation candidate Adbert Alzolay, which would provide the Cubs considerably more flexibility in managing the roster and Alzolay’s innings. If it falls the other way, however, and everyone is healthy (a big IF), the Cubs could be “stuck” with six obvious starters and no immediate solution – they’re not likely to deploy a six-man rotation as of now.

Before the update yesterday, Angels pitching coach Mickey Callaway was suspended pending an investigation into serious allegations of sexual harassment while with the Mets and Indians, but still technically employed by the Angels. But after addition details trickled out, he’s not only expected to be fired, the story is looking much worse for all the teams that had previously employed him (plus the Angels).

You can read much more about it from Brett right here, but just note that the Mets and Indians were both clearly aware of his behavior – as many stories have since revealed – including the fact that Callaway had apparently earned the nickname “Dick Pic Mick” with the Mets.

Well, the Indians, who were previously acting as if they were wholly unaware of everything, have reconsidered their position a bit, and are now responding a little more seriously. Here’s a statement about their on-going investigation:

A week ago, we were discussing how 2021 could be the end of Albert Pujols’ long, Hall-of-Fame career (his contract with the Angels is up after this season). But maybe we all spoke too soon.

Pujols (662 HRs) passed Willie Mays (660 HRs) last season for fifth on the all-time homer list, and is just 34 homers away from Alex Rodriguez, and, more importantly, 38 homers away from No. 700 overall – a tier that includes just Babe Ruth, Hank Aaron, and Barry Bonds.

And if he gets close enough this season, it sounds like he’ll give it another go in 2022, if he can find a home: “If I’m close to it, why not?” Pujols told USA TODAY Sports. “I don’t try to chase numbers, but 700 is a big number. If I don’t re-sign with the Angels, I’m going to have to find a team that will give me that opportunity. I just wish I had been able to stay healthy and didn’t have those injuries. Can you imagine if I had kept the pace I was on when I was in St. Louis? I’d have 800 homers by now.’’

Pujols, 41, hit 6 homers in 39 games last season, which would give him 25 HRs over the course of 162 games. Of course, that’s if he keeps up that pace and plays 162 games (neither of which are particularly likely). A more reasonable, albeit still generous, number would be something closer to 15-20 homers. Is that “close enough” to give it another go in 2022? And will a team be there to provide the at-bats? It seems like it would be wholly dependent upon the NL adopting the DH, though that does seem likely. As for a job, that’s a tougher question.

Albert Pujols could keep playing to reach 700 career homers: 'If I’m close to it, why not?' https://t.co/M5eHqS0UX1

•   Yesterday, we learned that the Triple-A season will be delayed by a month for COVID-19 related reasons (the Iowa Cubs just updated their schedule), and that teams will be allowed to host an alternate site similar to 2020, where players will be held under similarly strict COVID protocols to avoid a breakout. Baseball America has more on the details of that plan, including the fact that players will be paid as though the season has started:

As @JeffPassan first reported, Triple-A will be delayed until May. In this story, we have the answer to something likely important to Triple-A players: alt site players will be paid in April as if the AAA season has begun.https://t.co/td6Y62PsPh

•   Well this headline from MLB.com certainly caught my eye: The Man Who Outdrank Babe and Outhit Cobb. And let me tell you, Bob “Fatty” Fothergill sounds like a downright LEGEND ….

@greggroninger this is Bob Fothergill, who in his day literally had the nickname "Fatty". pic.twitter.com/4D85a72znZ

• "Fats" was a .325 career hitter over parts of 12 seasons.
• When asked for his batting secret, Fothergill replied: "Secret? Hell, there ain't no secret to it. You just walk up there and hit the ball."@whitesox pic.twitter.com/Dnp2K9kECk