You Wanted More Contact? Well the Cubs Are Projected to See the Biggest Jump in Baseball Skip to content

It may not feel like the Chicago Cubs made substantial changes to the offense this offseason, but not all changes come by way of transactions. Sometimes, the changes come by way of new players emerging and playing time adjustments. Throw in a couple external moves, and it turns out, you can see significant movement in projected stats.

For example, you know how the Cubs have been talking for a couple years about wanting to increase their contact rate? A little more variety like that in a lineup that was otherwise loaded with three-true-outcomes? Give pitchers something else to deal with?

Well, it turns out, the Cubs are projected to improve their strikeout rate more than any other team in baseball. From Mike Petriello at MLB.com:

The Cubs had the fourth-worst strikeout rate in 2020, or 27th-best, if that’s how you prefer to look at it. They stepped to the plate 2,214 times, and they struck out 568 times. That’s too many. It’s bad. But what about 2021? We went on over to FanGraphs and looked at their 2021 projections, which combine playing time expectations and projected 2021 stats. That accounts for new players on new teams in new situations, and also rolls in projections based on more than just 2020.

Put all that together, and you get this. Last year, the Cubs were 27th in strikeout rate. This year, they’re projected to be 16th. That’s a jump of 11 spots. That’s the largest improvement in baseball, and even if “middle of the pack” isn’t that impressive, it would still be a considerable step up from last year. 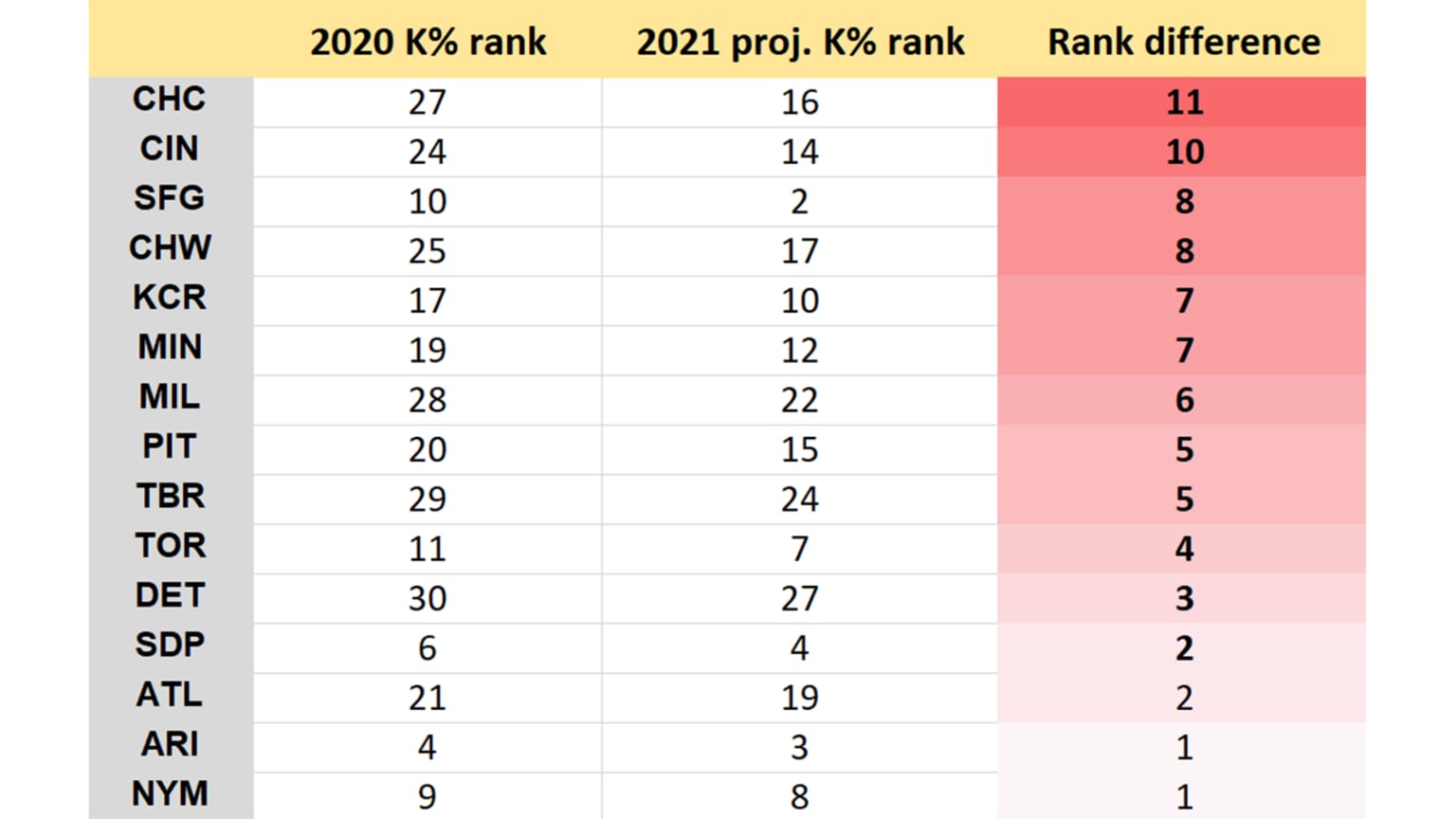 Middle of the pack in strikeout rate? Come on, you know the Cubs would gladly take that!

The switch from Kyle Schwarber to Joc Pederson is a huge factor here, as is the *current* projection of Nico Hoerner getting most of the plate appearances at second base (compared to Jason Kipnis, who struck out a ton last year, and David Bote, who strikes out a whole lot). There’s also just projected improvement from virtually every Cubs regular who had an inflated strikeout rate last year – Javy Báez, Anthony Rizzo, Kris Bryant, and Willson Contreras were all above their career averages.

To be sure, more contact, alone, does not make you a better offense. Rather, more contact – if it does not come solely at the expense of power and walks – is better than less contact, as a part of a healthy overall offensive mix. You can succeed in the big leagues as a high contact guy if you hit the ball hard enough consistently. You can succeed in the big leagues as a low contact guy if you really slug and take walks. But the best and most successful lineups seem to have a variety of types of hitters, which makes it all the more difficult on opposing pitchers to execute their plan (to say nothing of increasing your chances of getting those runners in when all you need is a ball in play).

There’s much more in Petriello’s piece about the Cubs getting more old school this year, including the flip side of the strikeout thing (i.e., their pitching staff might see their strikeout rate plummet this year).