MLBits: Theo on the Baseball Fix, the Gap Between Lindor and Mets, Marlins New Stadium Name, More Skip to content 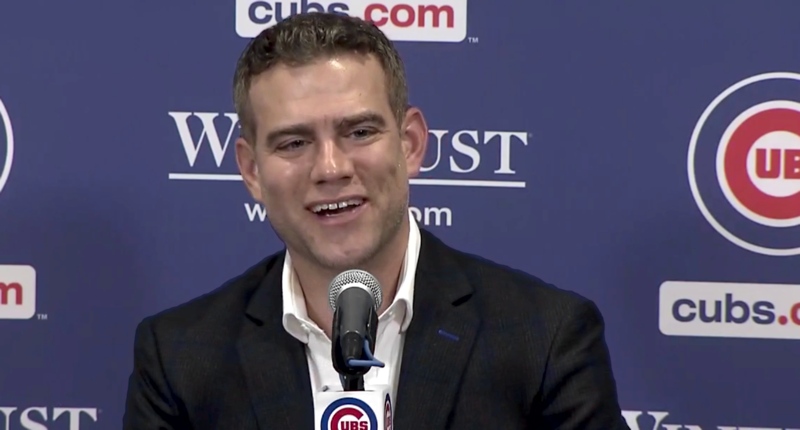 In my very short tenure as a big-time TV man on NBC Sports Chicago, I had the absolute pleasure of getting to know former Cubs outfielder (turned broadcaster/writer/analyst) Doug Glanville. I know we all hear this a lot, but there really isn’t a nicer, more thoughtful guy out there. He was soft-spoken, but deliberate. Old-school, but completely open to new ideas. Really everything you could want in a baseball guy.

Anyway, I mention all that because he (and Jayson Stark) recently sat down with one of the best minds in the game – Theo Epstein – to discuss re-crafting the sport into something that still resembles the game we all know and love, while making sure it exists well into the future (remember, that’s the point of Epstein’s new job within MLB):

Theo Epstein is on a mission – to create the kind of sport we'd design if we were inventing it now. He told @dougglanville & I about it!

Epstein is not hiding the ball: the game as it exists today is not the very best version of the sport from an entertainment perspective. The main enemy, in his view, and in the views of the many constituencies he cites, is the lack of on-field action. As we saw with the recent changes/experiments coming to Minor League Baseball, it’s crystal clear that MLB views this as a major issue going forward. Reduce the dead time. Increase the baserunning and defensive activity. Get some excitement back besides homers and strikeouts.

The Mets and Francisco Lindor have been working on an extension all spring, with a deadline of Opening Day. As of the latest, the Mets have offered a 10-year, $325 million extension. And Lindor said how about 12 years and $385M? Thus, we have ourselves a stalemate (I’m very surprised Lindor hasn’t already accepted, to be honest, but players can value themselves however they see fit).

In any case, Andy Martino reported that the two sides are “brainstorming” ideas how to close that gap, but Mets owner Steve Cohen – yes, that’s really him – took to Twitter:

There no teasing going on. I have made a great offer . It does take two to tango

For one, I do really appreciate how visible and responsive Cohen has been since taking over the Mets, and I think their fans do, too. For another, that is a way more candid and public than we’re used to seeing an owner. And in this case, as I mentioned above, Cohen isn’t really wrong. That *is* a great offer, one that would immediately make Lindor one of the highest paid players in the history of the sport immediately following the worst offensive season of his career.

So, again, yeah … value yourself however you want. Take whatever chances you want if you can reach free agency. You’ve earned it. But in this instance, the offer sure seems fair. It takes two to tango, as Cohen says, and asking for the highest new money guarantee ever seems to be a little overzealous.

Sticking with the Mets …

In case you forgot, the team was embroiled in a couple of very serious scandals earlier this offseason, when their new GM (and former Cubs executive) Jared Porter *and* former manager Mickey Callaway were credibly accused of sexual harassment. Porter was fired by Cohen after these allegations came to light (and Callaway had already left the organization), but Cohen is not stopping there. The team has hired an external law firm to investigate their workplace culture, “with a focus on sexual harassment, misconduct, and discrimination issues.” That’s a good start. Hopefully, other teams in the league (including the Cubs) follow this lead and prioritize an inclusive work environment for everyone. It’s better on a moral level. But it’s also better for the game.

Mickey Callaway is still employed by the Angels, though he is currently suspended pending the investigation.

(Plus an update on where Mickey Callaway investigation stands).

•   The interesting story aside (Randy Dobnak is an Uber driver with a 4.99 rating when he’s not on the field), this is one of the most atypical big league extensions you’ll see:

Right-hander Randy Dobnak and the Minnesota Twins are in agreement on a five-year, $9.25 million contract extension with three club options, sources familiar with the deal tell ESPN. The deal can max out at $29.75 million with the options and can grow with escalators.

•   There is a healthy and perfectly nice guarantee in there, but spreading it out over that many years and with that much money on the table in club options is just so unusual. I hope he earns every penny and becomes an even better story. Dobnak, 26, has been worth 1.6 WAR as a reliever over his last two seasons. Not bad!

•   I’m not quite sure how this is less serious than the initial reports, but Eloy Jimenez is scheduled for surgery today and he will miss most if not all of the 2021 regular season:

Eloy Jimenez pectoral tear was confirmed. Surgery tomorrow. 4-5 month recovery. So not quite as serious as previously thought. #whitesox

•   Starlin Castro, still recovering from a minor hamstring strain, has won the third base job in Washington. That news, which is interesting all on its own, came alongside the revelation that former top prospect Carter Kieboom will begin the season at the alternate site and eventually Triple-A. The Nationals were definitely hoping he’d win the job this spring, given his career trajectory, but it hasn’t come together for him just yet. Kieboom slashed .133/.204/.222 this spring. Do they wish they traded him for Kris Bryant now? (That was a loose/general rumor over the winter.)

Davey Martinez says Starlin Castro will start at 3B and Josh Harrison will get the bulk of the starts at 2B for now. (Castro is still recovering from a minor hamstring strain, but he's playing in a sim game tomorrow and is expected to be ready for Opening Night.)

•   Speaking of Nationals’ spring stats, how about Kyle Schwarber doing his thing: .250/.390/.583 with 4 homers, 4 doubles, and 10 walks. He was the second best offensive contributor for the Nationals this spring, behind only Victor Robles.

•   Sometimes, I don’t think teams appropriately weigh the naming rights bid to the actual name, itself … for example, the Marlins new stadium will be called “loanDepot Park.” Oof: