Zach Davies is One of the Most Extreme "Down" Pitchers in the Game - Will That Change With the Cubs? Skip to content

We’re still in the phase of learning these new Cubs starting pitchers, and I thought yesterday offered a really good look at how new Cubs righty Zach Davies succeeds. In his debut, Davies threw a lot of really good changeups, commanded his four pitches excellently, and lived at the bottom of the strike zone.

The guy was maximum down-down-down yesterday: 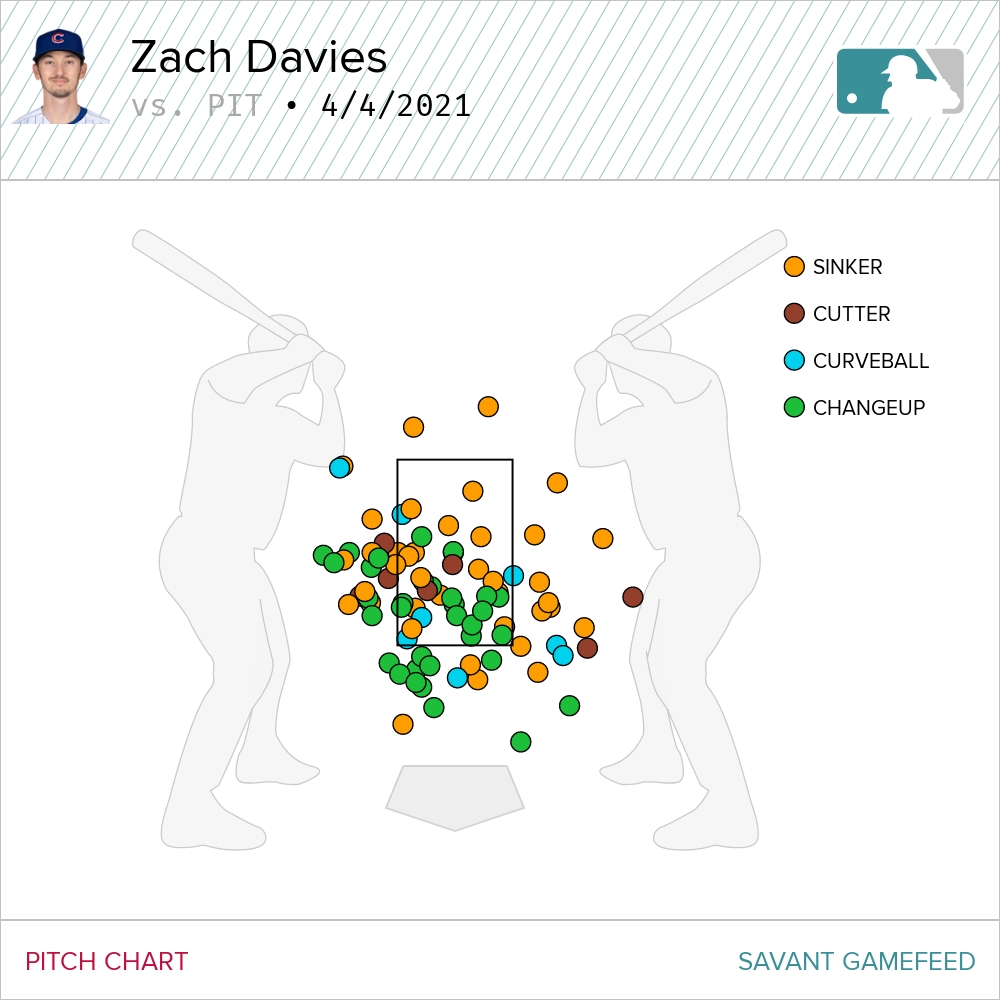 That wasn’t a new or one-off thing for Davies, which I actually didn’t know about him until watching yesterday. Maybe because I don’t think of him as a groundball guy? Anyway, I was fascinated: among the 108 pitchers to throw 2500 pitches between 2019 and 2020, Zach Davies threw the second fewest percentage of pitches in the top third of the strike zone.

I suppose this makes sense, as Davies features an arsenal built around sinkers and changeups – with curveballs and cutters mixed in – none of which are necessarily designed to exist up in the zone. And while the trend in baseball has been to start exploring high pitches more and more, even at lower velocities (more in a moment), Davies has featured that pitch less each of the last four seasons (2017-2020): 8.0% to 7.8 to 6.0 and down to 5.4% last year.

The comparison between Kyle Hendricks and Davies is already tired, but this is actually an example where they’ve trended differently: Hendricks drastically increased his usage of the upper third in the 2019 and 2020 seasons. Hendricks has allowed a .233 wOBA on those pitches in that timeframe, so the Cubs do have some serious proof-of-concept of a soft-tosser succeeding up there.

And so I wonder: do Cubs see some unlockable potential in coaching Davies to explore that part of the zone, or is the plan to let him continue to maximize the gameplan that he’s most comfortable executing? Does living at the hitter’s knees help his bread-and-butter, playing the deception between changeup and sinker? Or does the lack of changing eye level allow hitters to get comfortable as the day goes on?

Which brings me to the at-bat that inspired this post. And I’m sorry to focus on the one bad pitch in an otherwise-brilliant start, but I thought Colin Moran’s sixth-inning at-bat, and the home run that ended it, was particularly interesting.

The best color commentators can see things and point them out before they happen. And yesterday, I swear, it was like Jim Deshaies had sniffed out the bomb before it happened. When Moran took the two changeups for balls, going ahead 3-0 in the count, JD remarked that Moran had clearly seen the pitch so clearly. He couldn’t blame Davies for resorting to hard stuff (sinker/cutter) in the rest of the at-bat, but in doing so, Zach made the only real mistake of his outing: 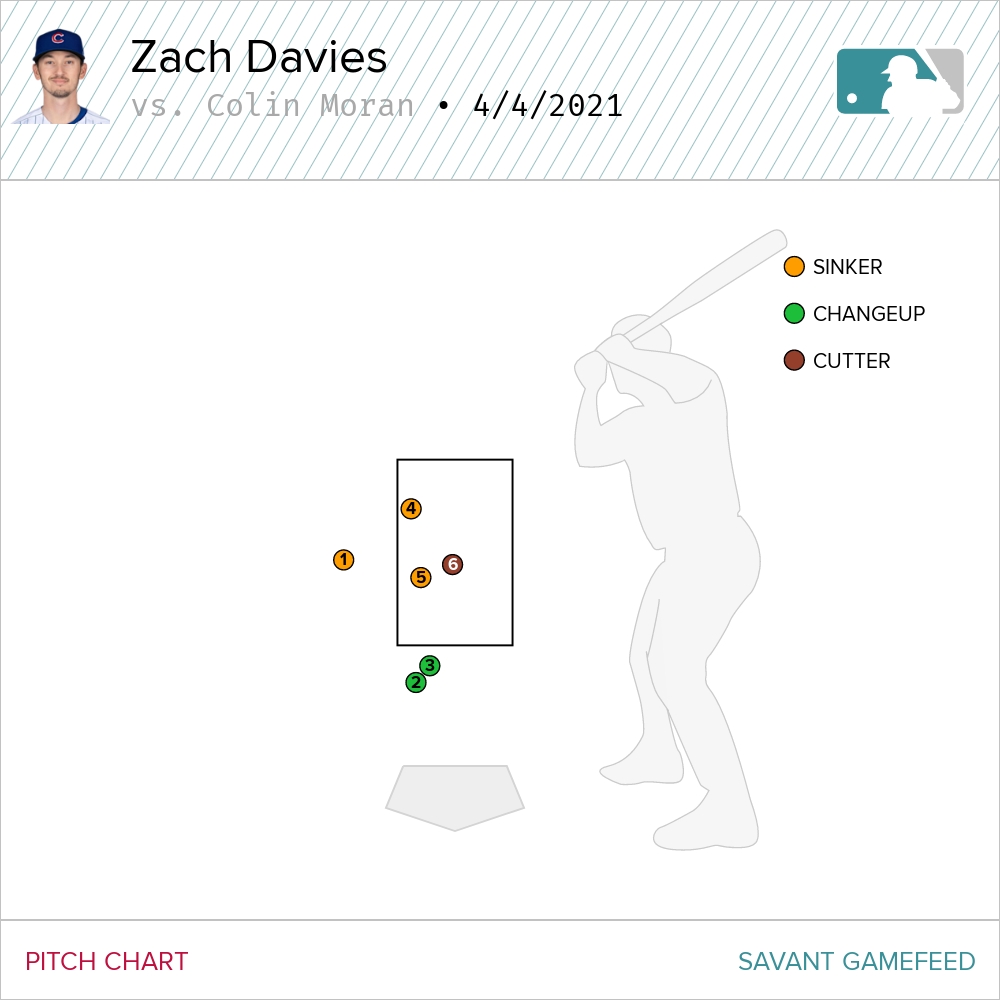 It also wasn’t the changeup that Davies and Contreras abandoned after those two takes, it was the bottom of the zone completely. It left Davies pitching to the corners, which he missed in attempting to backdoor a 3-2 cutter.

We’re going to have to watch it going forward to see where the Cubs land, but I just couldn’t help but think (in the moment) how nice it would have been to give Moran something in that top third of the strike zone. We’ll learn as this season goes along if the Cubs think that’s a weapon worth exploring, and if Davies can be comfortable throwing either the sinker, cutter or changeup there. His results the first two times through the order certainly didn’t suggest changing a thing, but I’ll also be interested to watch opposing hitters in their third at-bats against Davies if the arsenal stays limited. No conclusions yet; on April 5 all I can do is ask questions.

(Brett: I just wanted to slide in a random note that this discussion made me think about. Back when Yu Darvish was first joining the Cubs, a lot of us openly wondered why a guy with so much velocity and life on his four-seam fastball would so consistently work it down in the zone, when he could probably blow it by more bats at the top of the zone. In time, we’d learn there was a very simple answer: for Darvish, for whatever reason, he cannot maximize his command OR his spin rate at the top of the zone with the four-seamer. So as much as you might want him working up there with the pitch, it would actually become a much worse version of the pitch. For him, he’s gotta live with that one at the knees – and obviously it all wound up working out just fine for him! So anyway, as Bryan questions, is it possible for Davies to adjust his pitches up? Or does that degrade their effectiveness (or his execution) so much that it offsets any gains?)