Kimbrel Gets It Done Again, Welcome Back Almora, Burnes' Record, and Other Cubs Bullets Skip to content

Knock on wood, but the second dose of the vaccine doesn’t really seem to be impacting me much. I didn’t sleep great last night, but even that was marginal. No aches or fever or whatever for me. Just immunity. Sweet sweet immunity.

•   That was certainly the most tense Craig Kimbrel save we’ve seen in a while – it was coming eventually for a guy who’d basically been flawless since mid-August – but he got the job done without allowing any damage. Walk, walk, single, but then a strikeout and this almost-too-dramatic groundout to end it. Kimbrel was wondering why he did all those PFP drills if Rizzo wasn’t going to toss him the ball:

•   That was Kimbrel’s 15th straight appearance without allowing a run.

•   Other fun at first base included a warm welcome back for Albert Almora, who also got a tribute video in the ballpark according to folks at the game:

•   Some of it was match-up related, I’m sure, but it was interesting to see that Andrew Chafin got the full 8th inning last night in a very traditional setup role. He’s been that guy for a long time, even if Cubs fans didn’t see it much when he was with the Diamondbacks. Yes, he can particularly own lefties, but he’s also just a flat-out good setup man.

•   Speaking of lefties who look really good: Rex Brothers was the first reliever in last night, also given a full inning of setup work. And he looked damn good. Once again. Which is how he’s looked ever since he kept evolving at the alt site last year.

Cubs manager David Ross said the team scratched David Bote from the lineup because the issue – upset stomach – falls under the broad category of COVID-19 symptoms: “He’s been through a couple tests and everything’s fine from that standpoint. But we have to be extra-cautious.”

•   Glad to see the Cubs remaining overly cautious on this stuff, particularly right now when the virus is still doing a lot of spreading, and vaccination processes are still underway.

•   As we get deeper into the season, and beyond a plausible period where a guy might just not have developed full immunity yet, it’s going to be an issue if guys are getting scratched for precautionary reasons because they didn’t just get the dang vaccine. This is not about Bote specifically – I have no idea of his situation, so don’t go too crazy here folks – but is instead more about any guys who get held out in May+ because of contact tracing or teeny tiny symptoms that they would otherwise be playing through. My understanding is that if you’re vaccinated and have full immunity, those parts of the protocol go away for you and then you’re not held out of games. I am open to being corrected, but I’m pretty sure that’s how it works, as MLB and the MLBPA *want* players to get vaccinated, and then are following the science on infection risks post-vaccination.

Cubs Joc Pederson on offensive and team woes: "It's not fun when you're sucking and you're losing."

•   Good read here at The Athletic about the Cubs’ struggles in the rotation (outside of Jake Arrieta so far), including just how bad Zach Davies’ sinker command has been. It was pristine last year, and this year it looks like a Rorschach test (and up!): 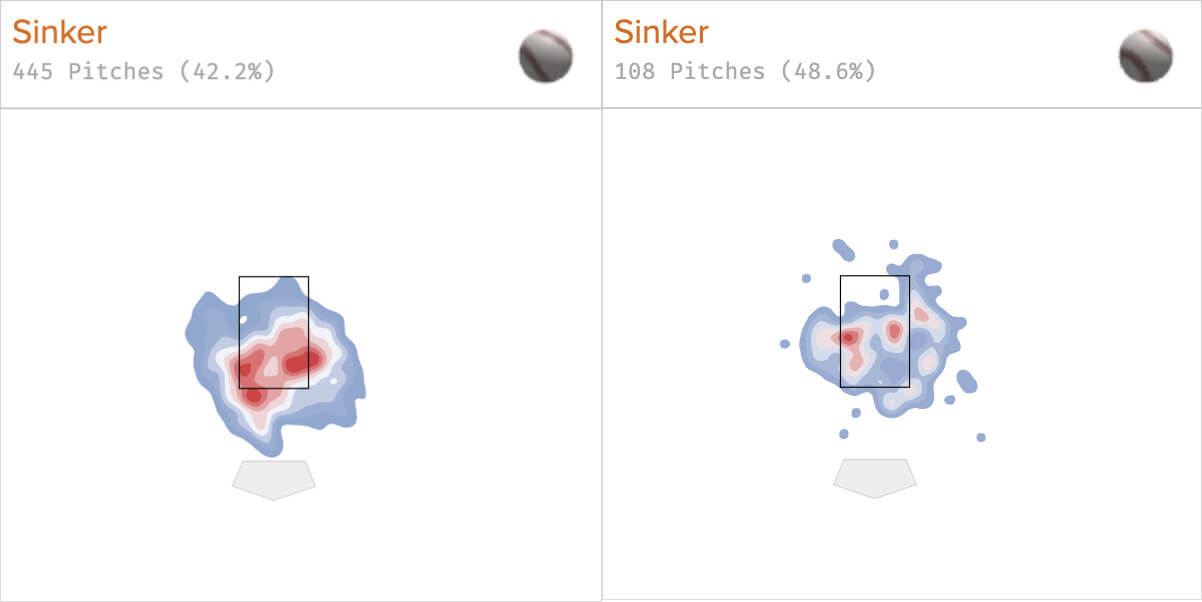 •   With another 10 strikeouts and no walks, Brewers ace Corbin Burnes is now up to 40 strikeouts and no walks to start the season, a record for starting pitchers. It’s also now the record for a starting pitcher over ANY four-start span. Yes, some of that is the current environment of baseball, but most of it is a guy who now has absurd command to pair with his absurd arsenal of pitches. His upper-90s cutter is simply an unfair pitch, like a car taking a hard left while speeding toward the plate, after the batter had to commit to a swing or no swing.

•   Speaking of guys with absurd cutters, it’s Burnes and Kenley Jansen and then everyone else. I really don’t even know what to say about this pitch:

•   Appropriately, the record for most strikeouts to start a season with no walks by any pitcher, reliever or starter? It’s none other than Kenley Jansen, who struck out 51 batters to begin his 2017 season before issuing his first walk. It seems like having an absurd cutter is a really good thing, eh?!

•   As for Burnes’ transformation, from Brewers.com:

Burnes set about remaking himself after a miserable 2019 season, when he surrendered 11 home runs in four April starts, was demoted to the Minor Leagues and later sent to the Brewers’ high-tech pitching lab in Phoenix. He finished with an 8.82 ERA, highest in the NL among pitchers with as many as Burnes’ 49 innings that year.

He underwent Lasik surgery to correct his eyesight and worked with a mental skills coach. He reshaped his four-seam fastball into a killer cutter, which Burnes can better command. He ditched the windup in favor of pitching exclusively out of the stretch. He honed the curveball and changeup to put them on par with his plus slider.

•   Burnes, 26, was drafted in the 4th round in 2016 (just seven picks after the Cubs took their first player in that year’s draft, pitcher Thomas Hatch), and was a consensus top 100 prospect just two years later, making his big league debut that year. What a scouting and player development win for the Brewers. (Oof, Zac Gallen went two picks after Hatch, and then you had Burnes, and then Shane Bieber went 10 picks after that. Hatch became a big leaguer – the Cubs traded him in a deadline deal to the Blue Jays for David Phelps – which is more than you can say for most late third-round picks, but ouch. Seeing three star-level starting pitchers right there after the Cubs took Hatch? Suffice to say, the drafting structure and methodology was seriously overhauled starting in 2018, and then a new drafting chief (Dan Kantrovitz) was brought in a year later.

•   Learning supplies, green tea matcha, kitchen gear, and more are your Deals of the Day at Amazon. #ad

•   That European Soccer League that got us talking about relegation in baseball? It’s already dead.