We’re playing outside today, kids. I don’t care if it doesn’t top 50 degrees. Dad wants to throw the ball around.

•   As I mentioned in his outing last weekend against the Reds, it was the first time this season when it actually looked like Zach Davies had an idea where his sinker was going. It was a very small step for a guy reliant on premium command, but it was an important step – I openly hoped it was a sign that he was finally finding his footing. To that end, while he wasn’t facing much of a lineup yesterday against the Pirates, it’s the same group that lit him up in Pittsburgh earlier this year, and you can see that this time around he did a much better job avoiding middle-middle: 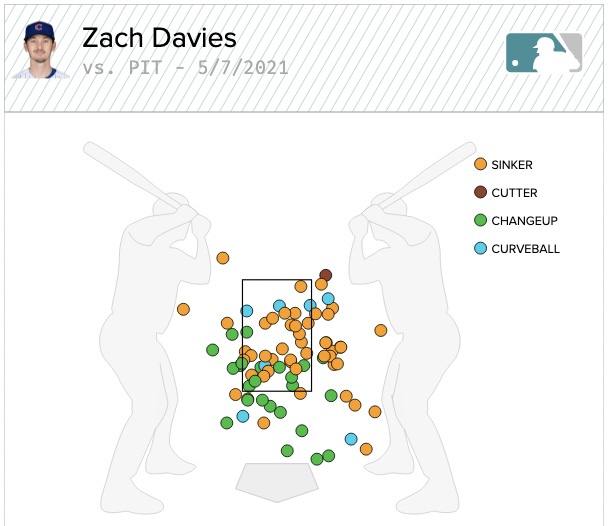 •   I thought it live and this chart confirms it: he was still a little too up for my liking (and not up enough when he went high), but the changeup was mostly very well-located, and the sinker location continues to improve. Does he get as many groundballs as he got yesterday against a better lineup? Probably not. But you do have to keep in mind that the wind was howling in, which impacts pitch movement and game-planning. Davies pitched to it, and finally got a crapload of crummy contact. No, I’m not flipping the switch and saying he’s fine now, but I am saying that’s two starts in a row where he seemed to know what he was doing out there, and the results improved dramatically. (A question for later: did the change in the baseball have anything to do with certain guys struggling early on? Guys who rely so heavily on command, if the ball was moving different? See the link below, because there is thinking out there that the de-juiced baseball may have had unintended consequences on pitch velocity and movement.)

•   More from and on Davies here, plus some bonus video love for his great defensive plays to get out of that nobody out, bases-loaded jam in the 7th:

A look at what Zach Davies corrected as he got back on course Friday and helped the Cubs climb back to .500. https://t.co/HfIkAWLbZq

•   As for the 9th inning, Craig Kimbrel was unavailable for non-injury reasons, according to David Ross:

Ross said Kimbrel was down, no injury. Said bullpen in general was thin today, but didn't get into details because he felt it was a competitive advantage to keep it quiet. Likely just the aches and pains that come up throughout the course of a season.

•   Given how dicey things got, we now know when Ross says a pitcher is down for the day, he is LEGIT DOWN FOR THE DAY. There was no getting Kimbrel up, even as the Pirates scored, scored, walked, hit, and eventually took a 3-0 lead down to a 3-2 game with the bases loaded and the tying run on third base. For his part, Rex Brothers deserves a little credit, coming into a tight situation, giving up a fluke, broken bat, bloop hit, then plunking a guy, and then coming back from a 3-1 count with the bases loaded to get the final out. Obviously you don’t want the drama in the first place, but man, for a “wild” guy to throw strikes in that situation – on reflection, it’s quite a relief to see, and only makes me “buy” Brothers even more.

•   I’m not gonna speculate on why Kimbrel was down after an off-day, or why the bullpen was “thin” after an off-day (but without guys being injured). I can think of explanations, but I guess we’ll just see who is available today.

•   Chargers, electric mosquito repellers, massagers, and more are your Deals of the Day at Amazon. #ad

•   Wade Miley threw a no-hitter last night for the Reds, which is wild. John Means no-hit the Mariners earlier in the week, too, and we know about the Carlos Rodon and Joe Musgrove no-hitters. Going back 10 years, you very rarely see more than four no-hitters in a single season (2015 had seven, 2014 had five, and 2012 had seven), and going back 20+ years, you rarely saw more than two in a season. This year, four in the first five weeks of the season. Yeah. I think we know what’s up. But in any case, obviously big congrats to Miley and the Reds:

•   Byron Buxton is hurt again – grade two hip strain, out for “weeks.” He could come back fine, he could still have a huge career (he’s only 27), and on and on. But it’s hard not to feel like we’re all going to miss out on a guy who could have been one of the best talents of the generation because he could absolutely never stay healthy. Meanwhile, he’s due to be a free agent after next year, and I doubt anyone could offer up the slightest clue what his market could look like. He had been worth 2.4(!) WAR through just over one month of this season.

Beginning with the strikeout vs Anthony Rizzo, Freddie Freeman is in a 1 for 25 slump.

•   By the way, Rizzo is such a good relief pitcher (the best of all-time) that he now has a player card as a pitcher in MLB The Show:

•   Beth Mowins will be on the call today for Marquee:

Great piece this week by @MLBastian on Beth Mowins ⬇️https://t.co/bf7u2YmMe8

•   Ah, the joy of unintended consequences (and why it’s good that other rules changes are being tested in the minors/independent ball first):

So we got the worst possible outcome! Fewer homers but the lighter ball led to higher velos and more movement, so more Ks, sweeet. https://t.co/5KjLs9Umpq