Hey, How About a Round of Applause for "The Other Guys"? Skip to content

From worst to first. That’s how the Chicago Cubs handled the month of May (19-8) after a terrible first month of the season (11-15). And how’d they do it? With contributions from every square inch of the roster. The bullpen remained dominant, there were some key bounce backs and steps forward in the rotation, the stars performed like stars, and, perhaps most impressively, every single role player stepped up to contribute when his number was called.

And those numbers were called a LOT.

The Cubs are very banged up at the moment. By my count, thirteen (13!) different players are currently on the injured list or have been unavailable due to injury, from everyday starters like Jason Heyward, Nico Hoerner, and Anthony Rizzo, to important part-time players like Matt Duffy, Jake Marisnick, David Bote, and Austin Romine, to members of the rotation/depth like Trevor Williams and Alec Mills, to a number of legitimately important relievers (Trevor Megill, Justin Steele, Rowan Wick, Jonathan Holder). But the Cubs have made it work and it’s been very impressive to watch.

I want to give some love to the positional group today.

So in the spirit of celebrating the shared contributions, I thought it’d be fun to separate the Cubs position players into two groups — (1) The Normies and (2) The Other Guys — to demonstrate just how much help the Cubs have gotten from everyone else.

These groups have become inherently fluid/jumbled over the course of the season (that’s what happens when everyone gets hurt), so we’ll separate them into the expected Opening Day starters and everyone else. That means, for one example, David Bote is a “Normie” and Nico Hoerner is one of the “Other Guys.” Again, just based on who started where. And for what it’s worth, the eight “Normies” are also the Cubs’ top-8 leaders in plate appearances this season. So I think that’s a fair dividing line, all things considered. 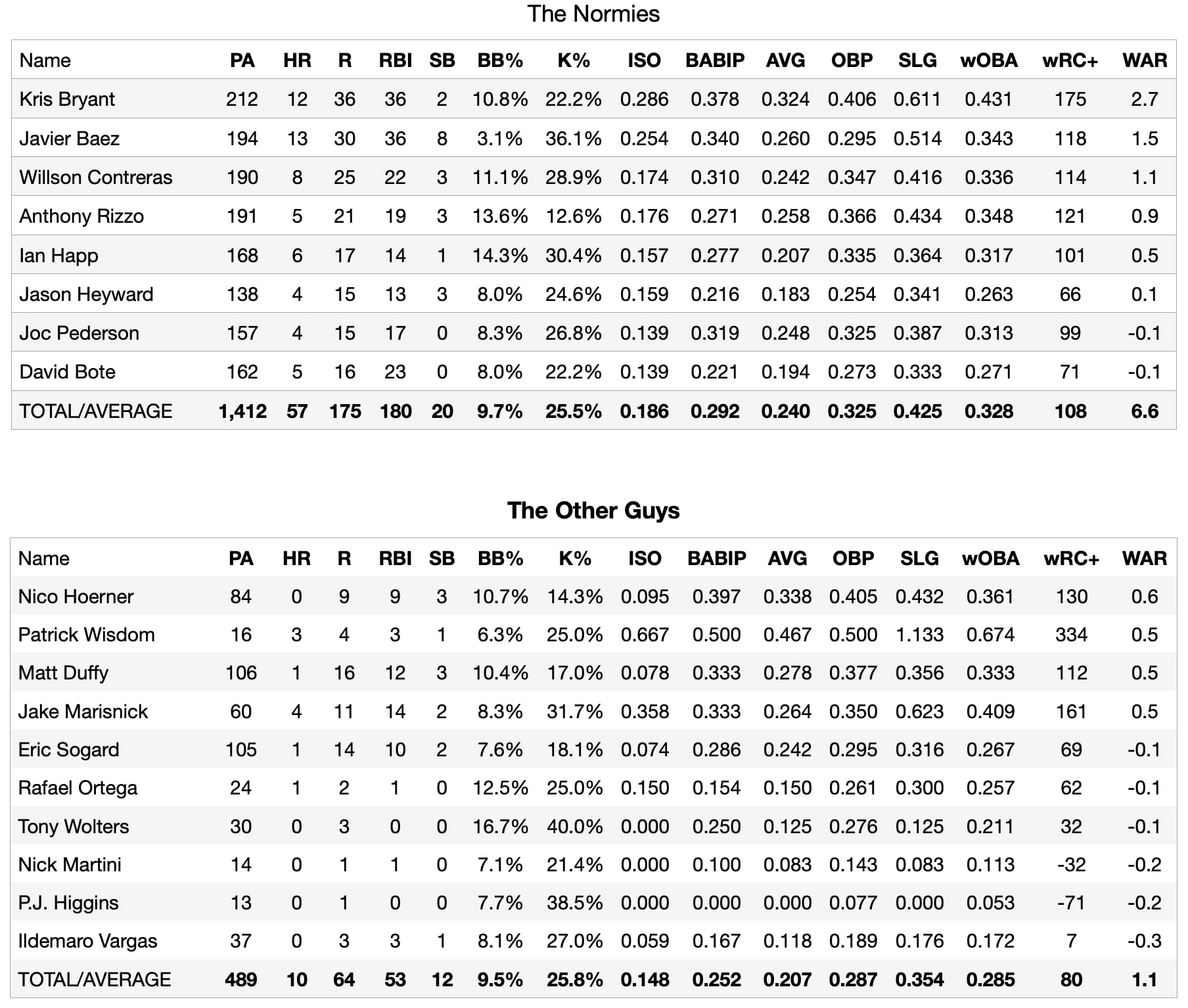 Okay, so there’s a lot to unpack here, but among the broad strokes, you’ll see that our 10 Other Guys account for roughly a third of the Normies’ plate appearances. And so on a per PA basis, the Other Guys actually lead the Normies in runs per plate appearance, and they share almost identical walk and strikeout rates. The Normies have more homers, relatively speaking, and more RBI, but the other guys are stealing more bases. In any case, this isn’t meant to suggest that the Other Guys are better than the Normies (they’re mostly not, as you could see by the slash line and the wRC+), but even being close in any of these categories is impressive for the back-ups and back-up back-ups.

And when you dig in on some of the individual stories, it’s even more notable.

Nico Hoerner is the most important Other Guy (and certainly the most borderline Normie of the bunch). He began the year at the alternate site, before the delayed Triple-A season started, but had his developmental plan tweaked once again due to factors out of his control (injuries on the big league roster, the pandemic, etc.). Unlike the last two times that happened, though, Hoerner delivered offensive results in a far more sustainable, believable way. No, I don’t think he’ll slash .338/.405/.432 forever, mostly thanks to a .397 BABIP. But when your average exit velocity goes from 85.6 MPH to 87.5 MPH to 89.9 MPH while you’ve also got a career-best launch angle, barrel%, hard%, and walk rate (10.7%), you’ll get my buy-in on the progress. And, indeed, those numbers match a different look at the plate and approach.

Heck, his .344 xWOBA is hardly worse than his actual wOBA (.361). And with already special defense up the middle, Nico Hoerner is arguably one of the best stories of a year with a lot of good stories. Get well soon!

Jake Marisnick and Matt Duffy. I’m lumping these two guys in together, because they occupy a shared space in my mind. When the first wave of Cubs injuries hit, Jake Marisnick and Matt Duffy stepped up and into the starting lineup, immediately transforming an offense that failed to make enough contact and had entirely stalled out from top to bottom (besides, maybe Kris Bryant). Marisnick hit the injured list slashing .264/.350/.623 (161 wRC+), demonstrating some really impressive and unexpected pop (4 HRs, 2 triples, 3 doubles, .358 ISO). Duffy, meanwhile, helped the Cubs by singling other teams to death and getting on-base over and over and over. When these two guys are back, it’s going to be tough to keep them out of the lineup.

And then there’s the more recent call-ups – the THIRD wave – like Patrick Wisdom, Rafael Ortega, and P.J. Higgins, without whom the Cubs would’ve been absolutely screwed, because I’m pretty sure the rules require teams to have 9 guys on the field at all times.

The planned back-up catcher, Austin Romine, has been out for most of the year, and the Cubs already cycled through the back-up’s back-up, Tony Wolters. So even if P.J. Higgins isn’t producing offensively, he’s in a very critical position for this team. The same can be said about Rafael Ortega, who’s started six straight games for the Cubs. And then, of course, there’s Wisdom, who’s 9th on the Cubs in terms of Win Probability Added … in 16 PAs (that’s not a counting stat, but still …)!

And the list goes on (and I haven’t even mentioned any of the huge performances from similar players on the pitching side: Kohl Stewart, Keegan Thompson, Tommy Nance, Justin Steele, Brad Wieck, and on and on).

I don’t know how long the Cubs can continue this way – especially with the Padres, Dodgers, Padres, Cardinals, Mets, Marlins, Indians, Dodgers, and Brewers coming up this June, in that order – but I do know that these guys deserve some serious love. The Other Guys on this roster haven’t just kept this team afloat, they’ve helped the team move back to the top of the NL Central and we appreciate them for that. This is one heck of a team effort right now.