Can Sergio Alcantara Adjust to How Pitchers Are About to Adjust To Him? Skip to content

Your mileage may vary on whether or not we’ve passed the point of Sergio Alcantara graduating from fun story to Official Dude, but whatever side of that fence you find yourself, it’s clear the Cubs have something in the 24-year-old, plus-glove shortstop. In just 14 games, Alcantara has been a revelation at the plate, allowing the Cubs to not miss a beat with their mess of infield injuries.

Then there’s the long-term hope, that you have this guy for six more seasons after this one, and maybe you’ve stumbled into a team-controlled roster stalwart moving forward. There are reasons for optimism on this front. One, I think we can have some confidence that we can project Alcantara as a positive defender in the middle infield moving forward, as that has always been his reputation. Two, Brendan Miller of Cubs Insider pointed out how Alcantara is nearing the 50 plate appearance mark where we could trust that there’s meaning in the all-world ability Alcantara has shown so far to not expand his strike zone.

Will it be 14% going forward? Probably not. He sat around 25% last year. But that was last year and this is this year. He walked at a laughable ~23% rate in AAA this season in 79 PA.

Brett talked in this morning’s Cubs Bullets about the quick adjustment that lack-of-chase provided this weekend, as Alcantara logged his first two walks of the season. The Cardinals weren’t as willing to challenge Alcantara as the Cubs previous opponents had been, and to his credit, he didn’t try to make too much happen. Patience was his best strength in a great early-season stretch in Iowa, so it’s good to see that beginning to translate.

But I noticed another adjustment yesterday that I wanted to point out. Look at Alcantara’s games this season broken down by Pitch Type: 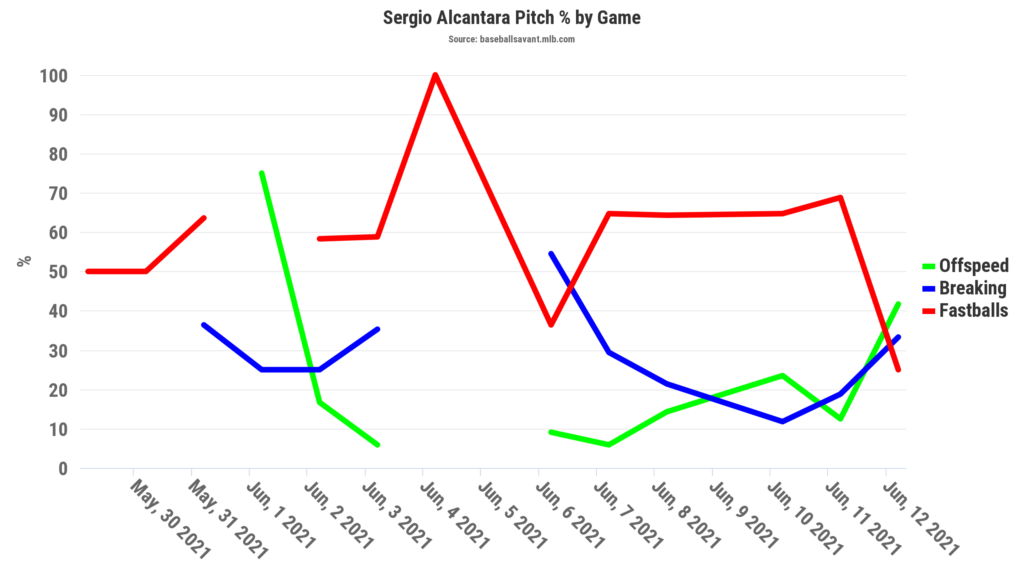 So in a start against Cardinals pitcher Carlos Martinez, who throws Fastball Type pitches (which include cutters) 62% of the time, Alcantara saw easily his lowest percentage of Fastball Type pitches of the season. Just three in 12 pitches seen. That’s no accident, it’s almost surely part of an evolving Cardinals gameplan that I have no doubt other teams are going to follow here.

While Alcantara has been over-the-top excellent in results against just about any pitch he’s seen, it’s no secret to teams that there’s been some luck involved in his batted balls against breaking balls and changeups. And so I don’t think it’s a bold prediction to say he’s only going to see more and more of those pitches. Which, of course, is also no secret to the Cubs.

Part of why we wait to make declarative statements on players is because this is the ebb and flow of baseball. At first, a pitcher makes you prove to them that you belong. Then, they’ll make you prove you can keep the bat on your shoulder when necessary. And only then will you be worthy of seeing the good stuff. Sergio’s been able to reach the last step quicker than most. But it’s the response to the last step that will tell us about who exactly we can realistically hope on him to be moving forward.