Zach Davies’ last outing (the one before last night’s win over the Cardinals) was his second best as a starter since the beginning of the 2018 season. But yesterday? Yesterday, he was even better: 6.2 IP, 2H, 2BB, 6Ks.

By game score (76), that was his best start since the beginning of the 2018 season and the sixth best start of his entire career (that’s over 137 games!). Given the state of the division race and the Cubs June schedule, Davies couldn’t have picked a better time to post back-to-back excellent outings.

So how’s he doing it? Well, according to his manager, David Ross (via Cubs.com), it’s all about getting ahead early in the count and success with his fastball: “I talk a lot about fastball command,” Ross said. “Right now, he’s getting ahead with the fastball, knowing where that’s going when he wants to throw the fastball. Early on [this season], I think there was a lot of pulled heaters to his glove side. It didn’t have that real action coming back. Right now, he’s got that action coming back.”

Davies earned a 56.5% first-pitch strike percentage yesterday, above his season-average before yesterday (53.5%). And as far as that fastball action, goes, there’s not a better example than this sinker in the first inning:

Zach Davies held the Cardinals to an 0-for-9 showing with his sinker today. Here was a gorgeous called strike three with the pitch in the first inning. pic.twitter.com/fxiUGSQ5JC

That is as nasty of a pitch as you’ll see from Davies (he threw 41 sinkers yesterday, 12 for called strikes and 3 whiffs).

But … this where things get a little confusing. Not unlike his last start, Davies wasn’t doing any one thing exceptionally well. Cardinals batters weren’t swinging at a lot of pitches out of the zone, and they were swinging at a normal amount of would-be strikes. They also made more contact on pitches in the zone than usual and didn’t whiff all that often. In terms of contact, a 90.9 MPH average exit velocity isn’t anything to write home about and neither is a 40% hard hit rate or 42.9 groundball rate (though he did get a lot of infield pop-ups, which is usually a very good sign for a contact manager).

In terms of velocity, spin rate, drop, etc., it all looked pretty normal, and, again, this is the second time in a row he’s gotten great results and beat the eye test without leaving much of a statistical trace. It’s a little bit of a stumper, to be honest.

The only thing I can really point out in the data is his work down at the bottom (and beneath) the strike zone as well as the top. It’s not a huge gap, but there is one around the belt, which would make big damage a little easier to avoid: 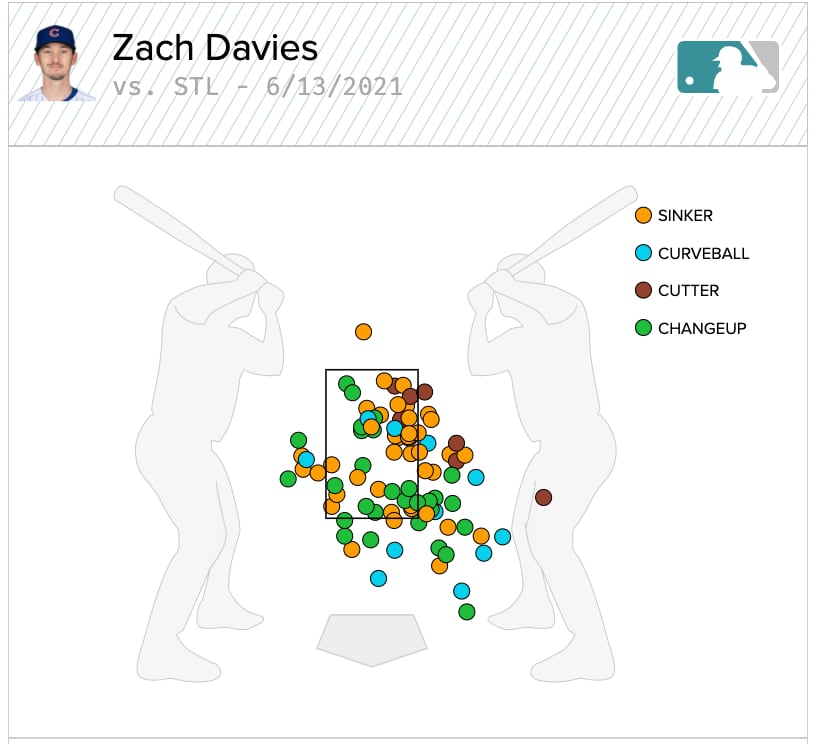 It certainly doesn’t hurt when the three hardest hit balls of the game all go for outs (and the fourth winds up as a single (all over 100 MPH)), but I just don’t recall thinking he was being hit too hard – which is unlike his last start, which did, in fact, begin with a TON of hard contact.

Perhaps we’re still just getting to know Davies and what a good start from him looks like. For some guys/starts, maybe you just know it when you see it. And yesterday, we saw it?