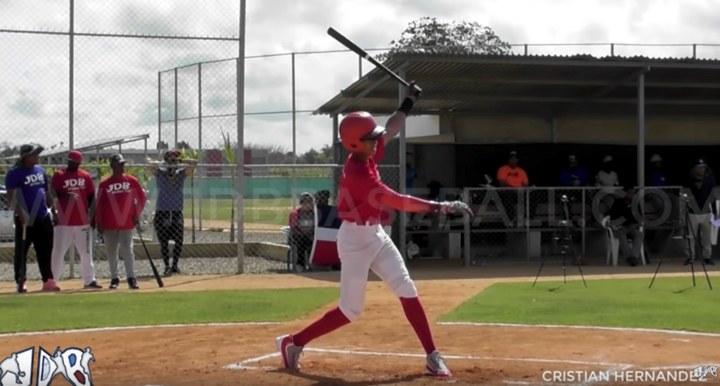 We are getting very close to being able to say the Cubs have four consensus top 100 prospects. There are definitely two – outfielder Brennen Davis and lefty Brailyn Marquez (who is plllleeeease gonna debut soon?) – and now there are two who have shown up on or around multiple top 100s. There’s catcher Miguel Amaya and now shortstop Cristian Hernandez.

Both appear on MLB Pipeline’s newest top 100, with Hernandez just sliding in:

Some scouts considered Hernandez the best prospect in the 2020 international class. The Cubs say he offers more upside than any international player they’ve signed in recent memory — including Eloy Jimenez and Gleyber Torres in 2013. The recipient of a $3 million bonus out of the Dominican Republic, he draws constant physical comparisons to a young Alex Rodriguez and Manny Machado.

Hernandez has the tools to hit for average and power and could become a .300 hitter with 30 homers on an annual basis if everything comes together. He has a fluid right-handed swing with quality bat speed and also exhibits feel for the barrel and a mature approach. He has a track record of producing in game action and his projectable frame should allow him to add plenty of strength.

Hernandez presently has plus speed, though he might lose a half-step as he matures physically. Even if that happens, he has the athleticism and actions to remain at shortstop for the long term. His quickness and arm strength would allow him to play all over the field if needed and he’d have no problem fitting the offensive profile wherever he winds up.

Hernandez, just 17, figures to begin his pro career in the DSL next month, with an outside chance of a late-minor-league-season promotion to rookie ball in Arizona. You would really do that only if he wasn’t getting any developmental value out of being in the DSL, but at his age, and having missed so much time in organized games because of the pandemic, I expect him to stay in the DSL all year. And if he holds his own and looks good to the scouts, he’s probably going to reach top 100 status on most, if not all, lists because of the pedigree. It’s rare that an IFA prospect reaches multiple top 100s before he’s even played a pro game (if memory serves, Eloy Jimenez and Gleyber Torres didn’t), but Hernandez is that rare caliber of IFA prospect.

I don’t anticipate the delayed start to Marquez’s season to take him off any top 100s this year, and Davis, who is breaking out at Double-A, is going to stay, too. Amaya, who is currently on the IL with an undisclosed injury, could become a consensus top 100 by the end of the year, but it’s going to take him getting healthy and showing a little more power. His age and his ability as a catcher already have him there for me, personally, but I understand that many others have questions about the pitch selection (i.e., is he really getting himself into drivable counts, or is he simply really good at putting the ball in play, and/or not with enough authority when he is up in the count).

That is all to say, the Cubs could very plausibly have four consensus top 100 prospects by the end of the year. There are others who could get themselves into consideration for SOME lists, but the delayed starts for so many of the pitching prospects and the lack of a huge early breakout on the positional side would seem to make another top 100 unlikely. Maybe if the switch has flipped for Ryan Jensen and he’s just obscene the rest of the way? Maybe if Ed Howard truly breaks out from here after time to adjust? Maybe if Reggie Preciado destroys rookie ball and is up at Myrtle Beach to end the year? Maybe if Christopher Morel’s recent dramatic adjustments translate to explosive numbers in the second half? I could go on with the maybes, but I don’t know that any are particularly likely.

Nothing wrong with that, of course, because so many of the Cubs’ best prospects are so young, and it takes a whole lot of performance and scouting to get onto these lists. Even if the Cubs aren’t “able” to sell this year and add to their prospect core, I really like where things stand overall, at least relative to the last five-ish years.