Major League Baseball decided to cram a week’s worth of headlines into one 24-hour period, so let’s take a quick tour to see what the heck is going on.

In case you missed the biggest story of the day yesterday, Trevor Bauer has been accused of assault by a woman with whom he had a sexual relationship that involved extra physical behavior. The woman has since received a restraining order against Bauer, but Bauer’s lawyer claims that they haven’t spoken in over a month or seen each other in six weeks and that the entire accusation is “baseless” and “defamatory.”

Many more details right here, if you’re so inclined.

For today, the news is that the Pasadena Police Department is investigating the alleged assault, and the case could be turned over to the D.A.’s office as soon as today (which will determine whether it moves forward or not). Major League Baseball has also been made aware of the allegations and will investigate the matter (remember, MLB is allowed to suspend/discipline players regardless of the outcome of criminal proceedings). The Dodgers had no comment.

Dodgers right-hander Trevor Bauer is under investigation for an alleged assault, Pasadena PD confirmed on Tuesday. MLB will investigate, with the Dodgers deferring to the league’s probe. Bauer’s lawyer denied those claims. https://t.co/63uCczXU6Q

In other sad news, the family of deceased Angels pitcher Tyler Skaggs is suing the Angels over his overdose, “alleging that an Angels employee supplied drugs to multiple players.” Specifically, the lawsuits claim that communications director Eric Kay, who allegedly had a history of drug abuse, provided drugs to “at least five” Angels players other than Skaggs.

“The Angels owed Tyler Skaggs a duty to provide a safe place to work and play baseball,” the lawsuit filed in L.A. said. “The Angels breached their duty when they allowed Kay, a drug addict, complete access to Tyler. The Angels also breached their duty when they allowed Kay to provide Tyler with dangerous illegal drugs. The Angels should have known Kay was dealing drugs to players. Tyler died as a result of the Angels’ breach of their duties.”

In another game of “I/we did nothing wrong,” the Angels vehemently dismiss the accusations as “baseless,” “irresponsible,” and “entirely without merit.”

Sad story all around.

On a much lighter note, there’s some beef brewing on the South Side of Chicago, and it’s not the kind you eat dipped with sweet peppers (that’s how I take mine, but, also, yes, giardiniara plays a role on occasion).

Last night, Josh Donaldson homered off Lucas Giolito, and as he crossed home plate he pretty audibly said, “It’s not sticky anymore,” which … is a pretty good troll, if I’m being honest.

Sounds like as Josh Donaldson crossed home plate after hitting his 2-run HR he said … "Hand's not sticky anymore… it's not sticky." pic.twitter.com/YQFhg54Si9

Especially because Giolito has seen maassssssive spin rate drops the past couple outings (i.e., when the checks for sticky stuff started). For example, Donaldson’s homer came on a four-seam fastball, and, well … just take a look (and try not to be sipping coffee as you scroll down, because you might spit it out): 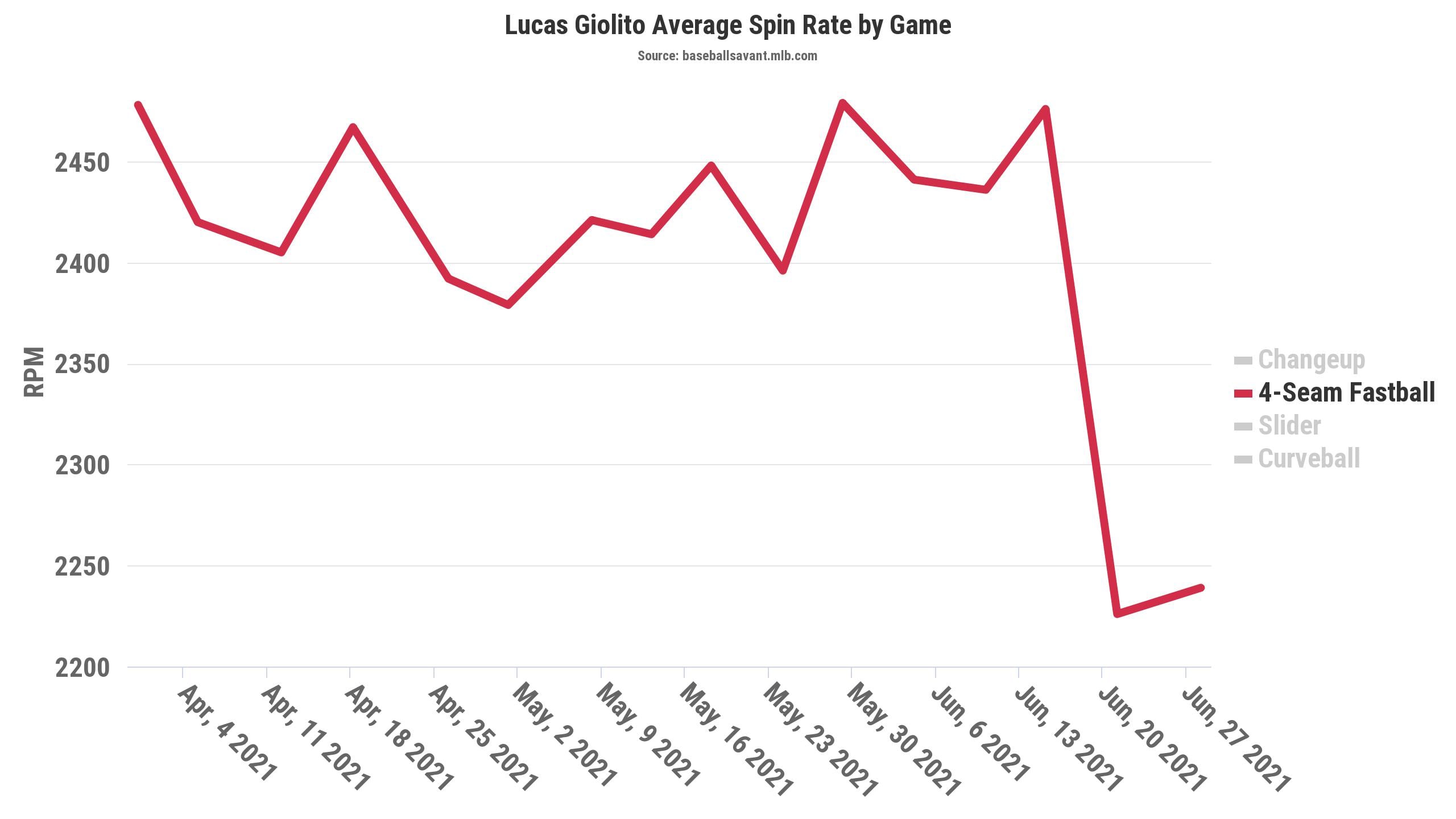 Uh, yeah. I’d say he was using something to achieve atypical spin rates. And that’s why I almost can’t believe the boldness of his postgame comments, calling DONALDSON “classless” when the data ain’t exactly fuzzy:

"He's a fucking pest. That's kind of a classless move. If you're going to talk shit, talk shit to my face. Don't go across home plate and do all that, just come to me."

Near No-Hitter in Colorado

But it ended in the 9th inning, because of Bob Nightengale … (I’m kidding, of course, and I really can’t believe the Rockies Tweeted this (LOL)):

If Marquez had earned the no-hitter, it would have been a record: “The modern record for the most no-hitters in a season is seven. That mark has been reached five times over the years, including this season and in 2015. The only other time the league had experienced eight no-nos in a single season came back in 1884.”

Instead, his final line: 9.0 IP, 1H, 1BB, 5Ks. That’s a really good game, my friend, especially in Colorado (albeit against the Pirates)! Marquez is considered among the potentially available (and high-profile) starting pitcher trade targets this season. The Rockies are probably thrilled with the timing of that performance.

Speaking of trade stuff, Jeff Passan has an MLB Trade Deadline preview, with some important notes. For one, the trade activity will be later than usual this season, in part, because the draft is later than usual and that’s drawing the full attention of most front offices at the moment.

Beyond that Passan identifies the Diamondbacks, Orioles, Rockies, Tigers, Marlins, Pirates, Rangers, and Royals as the most likely sellers. Meanwhile, the Twins are holding things up, because they’ve got what a lot of people want, but haven’t quite picked a path yet: “They’re the team everyone is talking about.”

To which I say, yeah, until the Cubs decide to sell: Need a starter? How about Zach Davies. Need a closer? How about Craig Kimbrel. Need a lefty reliever? Pick a name out of a hat. Need an infielder? Cubs have a third baseman, shortstop, and first baseman on expiring contracts. Need an outfielder, Joc Pederson is a rental. And so on.

I don’t bring that up to bum you out, but if the Cubs DO become sellers, they are going to absolutely turn the market upside down. With that said, Passan contends that they are still going to hold or add – at least, for now.

More from Passan: Among the best names currently available? Trevor Story, Starling Marte, and Joey Gallo. Other possibilties include Nick Castellanos, Andrew McCutchen, Mitch Haniger, Kyle Seager, and Kendall Graveman. But for what it’s worth, Passan doesn’t see German Marquez being moved at the deadline.

There’s SO MUCH more in there: Nationals plans, sure-fire buyers, more potential trade candidates, etc. Check it out.

•   Fernando Tatis Jr. is so awesome.

Fernando Tatis Jr. told a kid he’d sign a baseball for him after the game.

He kept his promise. pic.twitter.com/pbMZSHAGdf

•   No sticky checks at the All-Star game. So bring on the elevated spin rates!

https://t.co/m6tF7isiDO The Post has learned that there will be a game — a very high profile game — in which pitchers are not going to be checked for illegal sticky substances.

•   Shohei Ohtani eats alone so he can be the greatest baseball player ever, or something to that effect.

Shohei Ohtani eats alone because it's efficient. He once outlined his life goals and one strategy to achieve them: "Read more."

On two baseball cultures, history, and the ascendance of a new master.

"He wants to be the greatest baseball player ever." https://t.co/ITKOxcUoeg