The Cubs couldn’t pull off the sweep yesterday, but the weekend in Arizona nevertheless marked the team’s first series win in over a month.

I do not mean that as a compliment.

Instead, it was a reminder of just how bad the last month has been, from the terrible series in New York, to the embarrassing series at home against the Marlins, to the combined no-hitter in L.A. that you maybe thought was the start of something, to the 11 straight losses that followed, including the series in Milwaukee when things really went off the rails. It was a month that, effectively, ended the Cubs’ season.

The series in Arizona, against a historically awful Diamondbacks team, only served to underscore where things stand. A series win that required a 9th inning comeback in the middle game, it left the Cubs even further back of the Milwaukee Brewers than when they started the weekend. The Cubs can’t control what the Brewers do from here, but when the Brewers sweep the Reds (oof for the Reds, eh? total missed opportunity), that, too, only underscores how unrealistic any hopes are for a Cubs comeback in the NL Central. 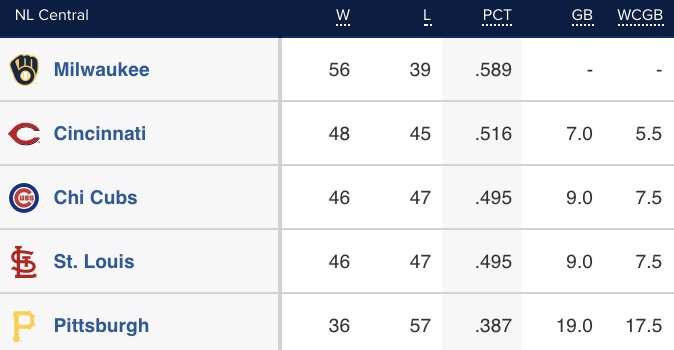 Consider that, with 69 games remaining, the Cubs are now 9.0 games back of the Brewers. Let’s assume for the moment that the Cubs pass the Reds (currently two games ahead), and also stay ahead of the Cardinals (currently tied) in the months to come, and let’s assume it’s all about passing the Brewers. With seven head-to-head games remaining, even if the Cubs won every single one of those games, that wouldn’t be enough. And do we really think the Cubs, currently 3-9 against the Brewers on the season, are going to win all seven of those games? Love ya, Cubs, but I do not have a reason to think that.

Speaking more generally, let’s say the Brewers go .500 the rest of the way. It’s a tougher schedule than they’ve had (though by no means “tough” overall), so it’s plausible. The Brewers have 67 games remaining, so we’ll be even more generous and say they go a click under .500, 33-34, the rest of the way. That would leave them with 89 wins on the season.

For the Cubs to match them at 89 wins, they’d have to go 43-26 over the next two and a half months, or a .623 winning percentage. Possible? Sure. Likely? Oh come on now. We are allowed to be realistic, especially when the issues with the roster are so apparent.

And that’s assuming the Brewers suddenly go from a team winning at a .5895 clip to a slightly-below-.500 team the rest of the way. If the Brewers actually keep up their current pace and win 96 games? The Cubs now have to go 50-19 to tie them. So.

Add that all up, and you get a 1.7% chance to win the division, per FanGraphs. And even though the Cubs are nominally a couple games closer in the Wild Card race, the nature/volume of teams involved give the Cubs even worse chances there (1.6%).

Yes, the sell-off that started with Joc Pederson should continue over the next 11 days. It’s just an acknowledgement of the reality of this season, and then an opportunity to build for the future. Does that mean you trade away every single expiring contract? No, not necessarily, since there are also future considerations involved there (extensions, qualifying offers, free agent pursuits, etc.). But it does mean that every decision made between now and the Trade Deadline on July 30 should be through the 2022+ lens. That’ll mean the trades and the returns, yes, but also it’ll mean decisions about playing time and roles in the second half.

That, and not the standings or playoffs, needs to be the focus of every game going forward.