With the Cubs firmly out of contention, the remainder of the 2021 season should revolve around precisely two things: (1) securing the best possible return(s) for the players traded over the next two weeks, and (2) allowing imperfect, but potentially useful future pieces to demonstrate their evolution and value to the future of this franchise.

In the rotation, that would be giving guys like Justin Steele, Keegan Thompson, Alec Mills, and maybe also Trevor Williams the opportunity to stake a claim on the Cubs 2022 pitching staff. In the bullpen, you’re looking to give Dillon Maples one last shot and/or see if Rowan Wick can be the guy he was from 2019-2020 (among … a lot of other stuff!).

For me, the most intriguing and perhaps immediately impactful project for the Cubs from now until the end of the season is figuring out exactly what they have in Patrick Wisdom.

Given his prospect pedigree and unique path to the big leagues, the extreme power, the surprisingly impressive third base defense, our desire for the Cubs not to be terrible next season, and the likelihood that the Cubs may soon need a full-time third baseman, Patrick Wisdom is drawing a lot of my attention. And you know what else? I think he’s making progress.

By now, most Cubs fans are aware of Patrick Wisdom’s general offensive arc this season. He burst onto the scene at the end of May with an absurd offensive performance loaded with homers, almost single-handedly extending the Cubs competitiveness en route to winning NL Rookie of the Month honors in June. Shortly after that, however, the league made some adjustments and Wisdom went into a deep slump, featuring a strikeout rate over 50% for certain stretches.

But have you been paying attention lately? Because he’s adjusting back and in impressive fashion.

Obviously, those sample sizes are equal parts small and cherry-picked, so let’s not read too much into them. But at the same time, we’re paying close attention for a reason and it’s possible he’s finding ways to counteract the way pitchers were shutting him down after that first explosive stretch.

And perhaps most importantly, perhaps the strikeout rate is beginning to start thinking about considering maybe kinda hopefully coming down from the top of the mountain.

As Brett has pointed out, his overall 68.1% zone contact rate remains an enormous issue (it would be by far the worst in baseball if he had enough PAs to qualify), but there may actually be some gradual improvement going on: 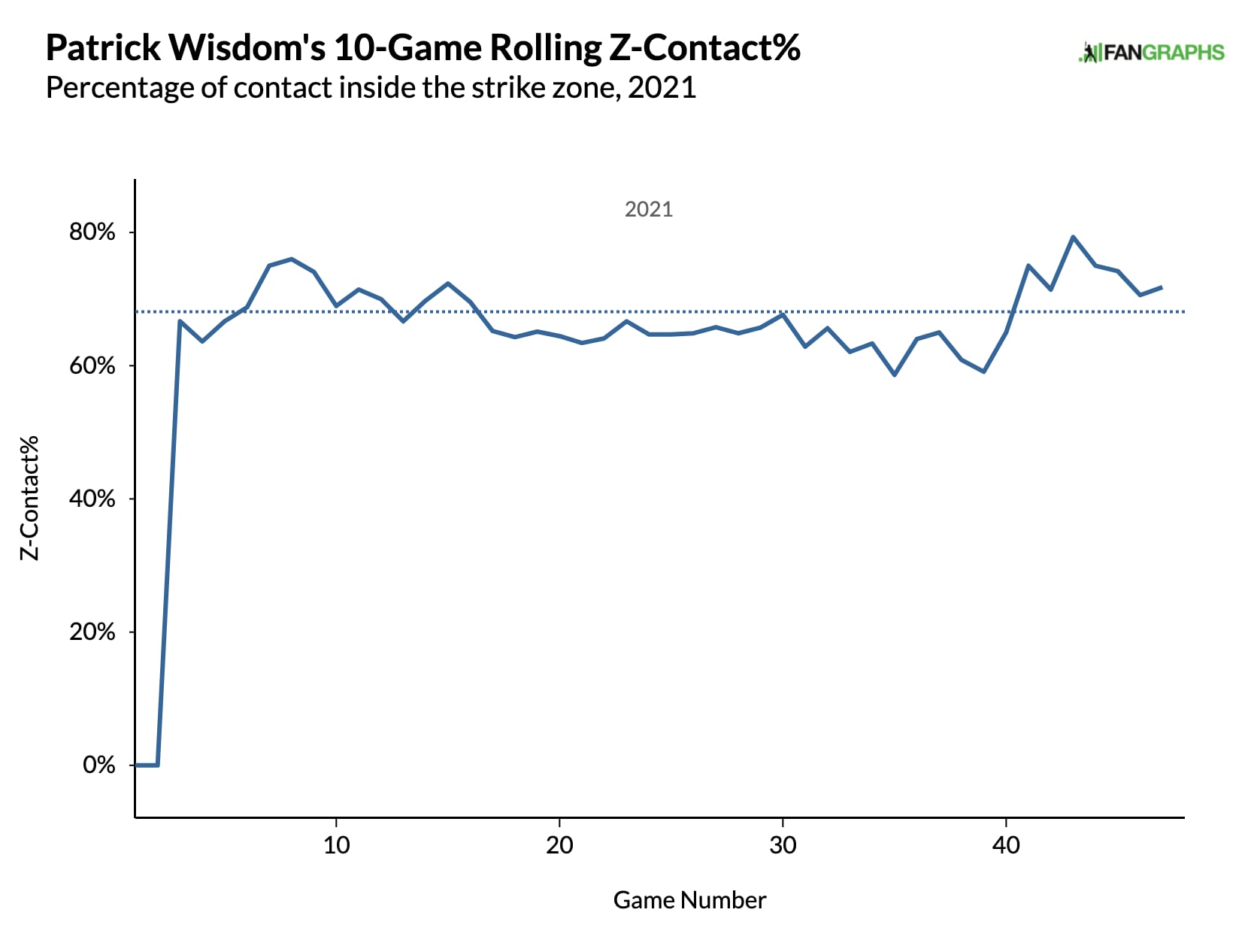 Whether that improvement continues long and far enough to save his overall production remains a concern, but that’s also the whole point of this post: We really need to see what he can do with even more opportunities in the second half. Because, seriously, the offensive upside is so unique. I mean, this shouldn’t be possible:

Patrick Wisdom has a 114 wRC+ over the past month (14% better than league average), which includes a whole lot of his struggles. That's really impressive.

The craziest thing, though?

He's done that while posting a 43.3% STRIKEOUT RATE. That … should be impossible.

But when you check out the Statcast leaderboards, you can see why it is. The guy makes unicorn-level hard contact at the perfect launch angle. Just consider the following for players with a minimum of 50 batted ball events:

I know the Cubs have had their issues with guys who hit the ball hard but don’t make enough contact, but (1) the quality of Wisdom’s contact when he does make it may actually be in a tier all by itself, (2) he is demonstrating some improvement on that front, (3) the Cubs’ offense may lose some of those players over the next weeks/months anyway, and you still need some power in your lineup, lest you overcorrect and become a high-contact, zero-power team.

“He’s somebody that I’ve come to trust and I like his approach,” Cubs Manager David Ross said Sunday, per the Tribune. “Even when he’s getting out, it seems like a pretty competitive at-bat night in and night out.”

Contact isn’t better than power. It all needs to exist in balance, both for the lineup, and for the player’s own skill. But, again, the Cubs must use the second half to see if there’s something here with Wisdom. And I suspect we will, because Ross sure seems to be a believer: “Wiz is still on track to to have a great season and he’s been a huge lift for us.”

This section will be much shorter, because there’s generally less to discuss. By the eye test, Wisdom certainly looks the part at third base, particularly his arm, which is as strong as almost anyone out there. But if you really need to put a number to it, consider the Outs Above Average (OAA) rankings at Statcast for third basemen with at least 50 opportunities this season:

Also, his 80% success rate is tied for second best in MLB among the same group of third basemen. Needless to say, that’s good company to keep. And when the numbers match the eye test, you can more comfortably say he’s an above average defensive third baseman.

Combine it with the offense, and you’ve got a guy whose 1.5 WAR is currently 4th in baseball among all rookies.

Although I said figuring out what the Cubs have in Alcantara, Duffy, and Bote isn’t quite as big of a deal to me as it is with Wisdom, those are three important players, each with his own interesting arc and potentially useful future. And that doesn’t even include infielder Nico Hoerner (or Kris Bryant and Javy Báez, who are still Cubs last time I checked). There are a lot of infielders to afford time in the coming months, and not all of them turn 30 in August, as Wisdom does.

Point being, the Cubs have a crowded infield for the short-term and a lot to figure out. Managing that won’t be easy, but they do need to find a way to make sure Wisdom gets his shot. There hasn’t been a prolonged stretch of non-competitive Cubs games since 2014. It sucks. But using the stretch wisely for development and information could expedite this reset and make sure there’s not another one (for another seven years).