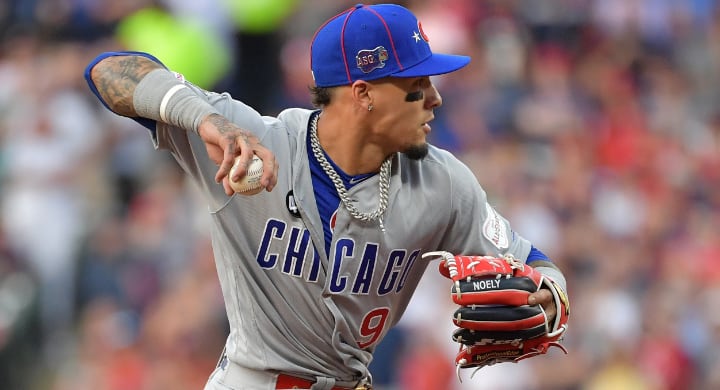 It’s been quite a day, eh? Already, we’ve had a couple of pretty specific rumors connecting Anthony Rizzo to the Boston Red Sox and Kris Bryant to the Tampa Bay Rays. Even Carlos Peña gets the sense that both halves of Bryzzo could be gone by the deadline.

One guy Peña can’t see moving, though? Javier Báez, who sure seems attached to Chicago.

Javy Baez on the looming trade deadline and Chicago: “my heart is always going to be here.” #cubs pic.twitter.com/S9nyIiVYJM

The feeling is mutual.

And indeed, despite his 9th inning heroics last night, Báez’s (un)timely injury may present a significant roadblock in the Cubs efforts to trade him, such that those efforts existed in the first place. I know his overall offensive performance this season has felt lacking at times, but he’s got a 137 wRC+ since June 22nd (106 PAs) — 37% better than the league average hitter — and has been even hotter since the Fourth of July: .350/.375/.600 (159 wRC+).

To say he would’ve been appealing to any infield-needy playoff teams is a huge understatement. But with the heel injury, I just don’t see a deal coming together before the deadline. Hopefully, that works out better for the Cubs and Báez in the long haul. Obviously, the math needs to make sense, but I’d definitely like to see him stick around beyond this season.

The Cubs have already begun tearing down their once-dominant bullpen, trading Andrew Chafin to the A’s last night, but they still have the top available closer on the market, Craig Kimbrel, and one of the top relievers, Ryan Tepera, to deal and seemingly every intention to do so.

Now, it’s entirely possible that Rogers was taken out of the game out of an abundance of caution (a la Kris Bryant’s hamstring fatigue) precisely because he is going to be traded. But you also probably aren’t putting him in that game if there was some known injury risk ahead of time, either. In any case, if Rogers is no longer going to bet traded (or is no longer as appealing as he once seemed to be), that helps the market for Kimbrel and Tepera. Just something to keep in mind.

For what it’s worth, Rangers closer Ian Kennedy, Angels Closer Raisel Iglesias, and Nationals late-inning reliever Daniel Hudson are all “generating significant interest” per Jeff Passan. So, yes, there are still plenty of interesting relief alternatives out there. The Cubs are in a good position, but it’s not a market all to themselves.

Here’s a weird contract quirk: Max Scherzer, who is once again on the trade block, now that the Nationals have put up the white flag, is actually a low-financial-cost acquisition for any team that acquires him. I’ll allow Ken Rosenthal to explain:

The uniquely structured seven-year, $210 million free-agent deal Scherzer signed with the Nationals in January 2015 essentially pays him $15 million per year from ’15 to ’28. Scherzer’s payout this season is a $15 million portion of his $50 million signing bonus. He already has received half of that amount, with the other $7.5 million due in September.

The signing bonus, however, is solely the Nationals’ obligation, and not one an acquiring team would pay, according to two sources with knowledge of how a trade would work. The acquiring team instead would be responsible for the remainder of Scherzer’s $35 million salary for 2021 — about one-third. And that amount, because it is deferred entirely until ’28, would be valued at less than it is now.

With that said, the acquiring team would take on roughly $10M in terms of the luxury tax payroll calculation, so the money is not a total non-factor for those teams bumping up against the CBT. In any case, Scherzer, who missed his last start with right tricep discomfort, is scheduled to start on Thursday. Normally, you’d expect a team to get a deal done before he pitches again so close to the deadline, but in this case, it probably serves the Nationals better to let Scherzer prove he’s healthy (if, you know … he is). If he performs well on Thursday, he’ll easily and immediately be one of the most targeted pieces of the deadline.

In terms of suitors, (1) the New York media is trying to push the Mets into an intra-division over-pay, (2) Jeff Passan is among the many voices attaching Scherzer to the Dodgers and Giants, and (3) Ken Rosenthal adds the Padres to the mix.

It’s important to note that with 10-5 no-trade rights, Scherzer will effectively be able to dictate his destination in any deadline deal. But with three NL West teams vying for his services, the Nationals will still get a return worth celebrating if they decide to move him.

A small clarification here: In any potential trade situation, Max Scherzer will exercise his 10-5 rights b/c they afford him the ability to approve or not approve a deal. The point, as originally stated, is that he's open to moving and does have influence on destination.

Trea Turner on the Move?

And since the Nationals appear willing to move Max Scherzer, they’re fielding a ton of calls on star shortstop Trea Turner.

Hard to picture them getting that massive of a haul with so many shortstops hitting FA this winter and Turner with just a year of control left. But he’s second among all MLB SS in fWAR. Might be the biggest impact player approaching available this week, even though it sounds like

Janes hits on all the key points there: the Nationals would need a haul, but with Turner’s extra year of control and so many other shortstops hitting the market this offseason, that may be too difficult a gap to bridge at the deadline, where not every team is able to compete in the bidding process. My bet is that Turner stays put, but Janes isn’t the only one to hear that the Nationals are genuinely willing to listen.

Joey Gallo has been all over the rumor mill for the better part of July, and I don’t think that’s going to quiet down until he’s dealt or the deadline passes. ESPN has the Padres and Rays in on Gallo, and Jon Morosi adds a couple other teams to the mix:

Sources: The #BlueJays, #Yankees, and #Padres have had trade talks with the #Rangers about RF/1B Joey Gallo.

The Yankees continue to confuse me, but they’re evidently not willing to give up on this season and their desire to get more left-handed has been well-documented. And even if they can’t get more left-handed, they do hope to improve the offense, potentially by targeting Trevor Story, pushing Gleyber Torres to second and D.J. LeMahieu to first. Again, I don’t see it, but it’s been reported over and over, so there’s something there. The question is whether that something is legitimate interest or a desire to push the Rays and Red Sox to overpay for their own additions.

Circling back to Gallo, although as a corner outfielder/infielder and left-handed hitter with additional team control he’s far from a perfect substitute for Kris Bryant, there has been a lot of overlap between these two markets.

•   Even if the Cleveland Guardians (first time I wrote that) are theoretically open to trading third basemen Jose Ramirez, they’ll have to be “blown away” to actually consider moving him and his contract that keeps him under affordable team control through 2023.

•   From Twins world: Jose Berríos is more likely to be traded than Byron Buxton at this point, but the asking price on both remains extremely steep … in the sense that the Twins are prioritizing returns that can make an immediate impact on the 2022 season. Minnesota hopes to contend next year, and since neither player is an outgoing free agent, they’re happy to hang onto both.

•   Yesterday, Brett explored a rumor suggesting that the Padres might try to use prospect to trade away a big contract, like the one held by first baseman Eric Hosmer. You should really check that post out, because it’s at least conceivable that the Cubs could be implicated, given their apparent financial flexibility, need for prospects, and potential opening at first base. In any case, a brief update to that story includes Hosmer’s 10-team no-trade list, which does not include the Cubs.

Eric Hosmer has a limited, 10-team no-trade clause for 2021. The teams he can block, per source: BAL, CLE, DET, MIL, OAK, PIT, SF, SEA, STL, TOR. Story from yesterday with @dennistlin on Hosmer trade being among Padres’ possible options: https://t.co/eH14zOmchQ