Good luck to the basketball obsessive among you – from the MLB Trade Deadline straight into NBA free agency. So much tension back-to-back. Here’s hoping the Bulls make some moves to bring you positive vibes today …

•   Take it for whatever you want, but it’s been an across the board thing that I’ve seen and heard: execs and scouts and believe the Cubs did very well at the Trade Deadline. Obviously the balance for fans is questioning whether the total sell-off was the right move at all, but I certainly get myself to a place where I believe the Cubs did quite well in their returns in a world where a sell-off was definitely coming. I can go through each of the trades the Cubs made this trade season, and range from “wow that’s why more than I thought they could get” (Javy Báez deal, Anthony Rizzo deal, Joc Pederson deal, Jake Marisnick deal) to “that’s a strong or solid return” (Craig Kimbrel deal, Kris Bryant deal, Andrew Chafin deal), with only one trade leaving me scratching my head on its face (Ryan Tepera). And since that was one of the lower expected value deals in any case, I am more OK with deferring to the Cubs going with a scouting play.

•   Here’s an example section of the stuff you’re reading and hearing out there, for what it’s worth:

It’s not often that a seller is mentioned as a big winner of the Deadline, but myriad executives lauded the Cubs and Nationals for their work this week. As difficult a decision as it must have been for Jed Hoyer and his front office to trade away players such as Bryant, Rizzo, Báez and Kimbrel, Chicago brought back a haul of young players that could help the Cubs contend soon without the pain of a lengthy rebuild.

“They sold rentals and restocked their system,” an NL GM said. “Next year, they can go out and get free agents, as well.”

“I thought the Cubs did a great job in their circumstances,” another NL GM said ….

“While painful in the short term, both teams did very well to retool on the fly by adding upside controllable players,” another AL executive said.

•   And here’s what Sahadev Sharma is hearing:

While nobody wants to hear it, the return in those deals (along with what they received for Kimbrel and smaller deals for Ryan Tepera and Andrew Chafin) have the league abuzz. Opposing front offices were impressed with the haul Hoyer was able to get back, particularly for Kimbrel and Báez. One scout suggested Crow-Armstrong had the highest ceiling of a very deep Mets farm system, while another said he was the best prospect moved at the deadline — yes, over new Twins prospect Austin Martin.

•   In order to actually compete at a high level in the near and medium-term, which would be the actual benchmark by which to judge this trade season down the road, the Cubs are going to have to (1) develop the hell out of the players and prospects they received, and (2) make exceptional decisions in free agency. But for now, with the dust cleared a bit, I do agree that the trades do look quite strong for the Cubs, especially for rental position players, where the returns had become so modest in the last five-ten years.

•   It’s still not determined whether Justin Steele’s next start will be with the Iowa Cubs or the Chicago Cubs, but the promotion is coming soon:

LHP Justin Steele had a 0.89 ERA in six games (four starts) in July for Triple-A Iowa as he stretches out to be a starter again.

His time in the #Cubs rotation is right around the corner.

“I would say he’s really close.”https://t.co/9Jbaa9Srzo

•   One rub is that the Cubs do have a full rotation now that Jake Arrieta has returned, and only Trevor Williams was traded. That isn’t an insurmountable rub, obviously, because the long-term view of the org is going to take precedence. If the Cubs want a big league start for Steele, he’s going to get it. But the situation just reminds me that it was a little bothersome that Zach Davies wasn’t traded – even if only for a minimal return. If he’s going to keep taking starts the rest of the way, you wonder if the Cubs had thoughts about trying to retain him on a modest extension.

•   Crazy chart at The Athletic, given how poor David Bote’s results have been this year: 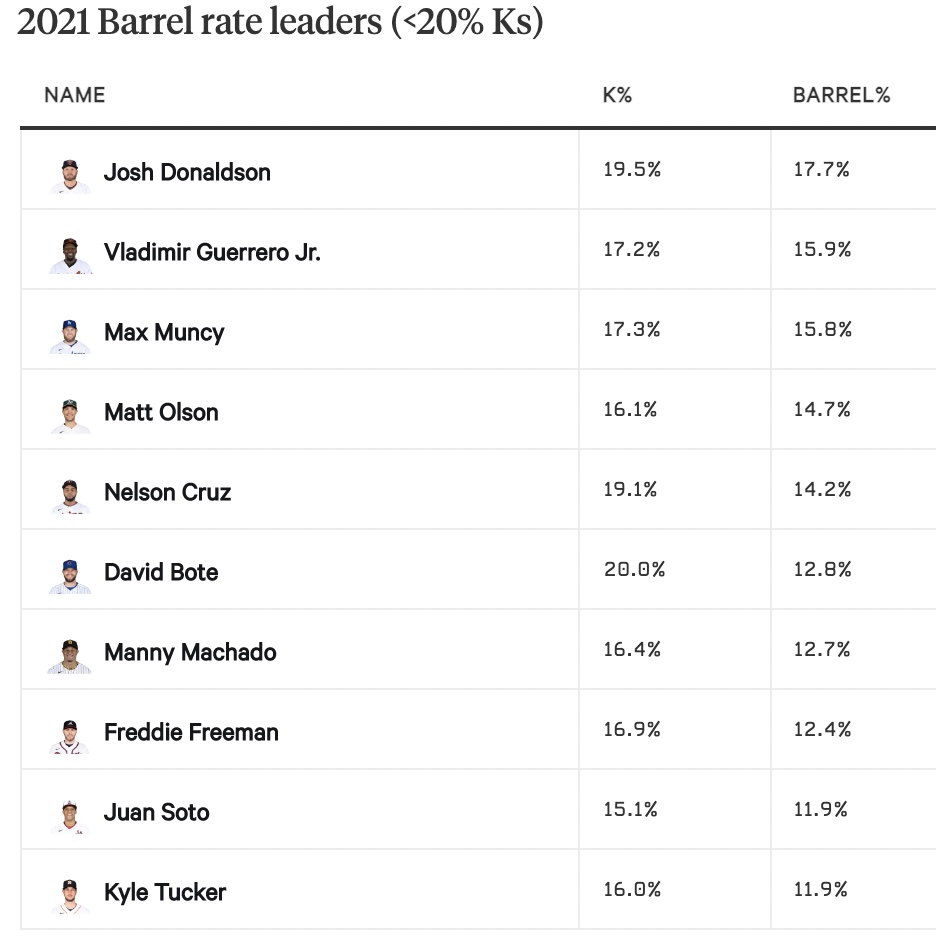 •   That sent me over to Statcast to find out where David Bote ranks on the “unlucky scale” – the difference between a guy’s wOBA and his expected wOBA based on quality of contact – and sure enough, he’s at the very top of the league with a whopping 70 point difference (no one else is even over 60 points!). We’ve talked about Bote’s bum luck this year before, but what’s hard to know is to what extent he’s responsible for the issue (i.e., to what extent he’s hitting the crap out of the ball, but doing so in such a way that doesn’t actually increase production (is that a thing?)). I do love that the strikeout rate is so down this year, though, and he’s still hitting the ball hard. Here’s hoping he can get a lot more starts the rest of the way this year, and then figure into the infield mix next year. If everyone is healthy, I’m not sure if there’s a starting spot available for him (Nick Madrigal will be at second base and Nico Hoerner will be at shortstop; Patrick Wisdom could be at third, or the Cubs could make a move). Bote might just have to keep grinding as a part-timer.

•   Trevor Story wound up not traded by the Rockies, who did almost nothing at the Deadline, and he was not happy about it.

•   After the Mets declined to sign him, top pick Kumar Rocker will go pro elsewhere and then be eligible for the draft in 2022. As you might expect, a lot of folks feel like he got screwed, because now he loses a year of development time (to say nothing of the bonus he might’ve received from another team). A complicating factor here is that apparently Rocker declined to participate in a pre-draft process of submitting an MRI, which would’ve meant the Mets had to offer at least 40% of slot in order for them to get the comp pick next year. But since he didn’t – and a lot of top pitchers don’t – the Mets didn’t have to make an offer at all. Keith Law said on Twitter that if it had played out that way, though, Rocker would be a free agent now. He might have the ding of a “bad” MRI floating out there, but I guarantee a team would still sign him for $10+ million even if they thought he needed Tommy John surgery. The upcoming CBA is probably going to change a lot of this, but now you wonder if top pitching prospects would’ve always been better submitting the MRI and rolling the dice on that side rather than having what just happened to Rocker happen.

•   Law also reminded folks of the Brady Aiken situation, where people believed at the time that the Astros were exercising bad faith in their negotiations with then top pick Brady Aiken (remember that?), but it turned out we later learned that, no, he really did unfortunately have a unique elbow situation that made the probability of a successful Tommy John surgery lower than for most pitchers (per Law).

•   Long story long here: Rocker figures to pitch in indy ball or internationally for a year – with his innings managed much more carefully than they would’ve been at Vanderbilt – and then he’ll be a very unique draft-eligible player next year. The last time a top-of-the-draft college junior pitcher didn’t sign and went back into the draft, it was Mark Appel, who was drafted 8th by the Pirates in 2012, and then went first overall to the Astros in 2013. You may remember that draft.

Yesterday, in his last game in High-A, Rockies prospect Michael Toglia hit a grand slam. And it made one woman very happy. It was grand slam weekend in Spokane, and Toglia’s hit won her $10,000.

Which is the exact amount a Class A ballplayer makes in an entire season of work.