Watch Out, MLB ... Patrick Wisdom Is Making Some Big-Time Adjustments Skip to content

In the wake of the Friday Afternoon Massacre — a.k.a. the 2021 MLB Trade deadline — we’ve been left to watch a Cubs team devoid of its top talent and, frankly, most reasons to watch night-in and night-out (actual up-to-date playoff odds: 0%).

But most isn’t all. There are still several key players battling to earn their spot on the next Cubs roster, and Patrick Wisdom may be the most exciting among them. And since he’s on a bona fide hot-streak right now, I figure it’s time to talk about what we’re seeing and what it might mean.

Last night, Patrick Wisdom recorded his third 3-hit game of the season (10th multi-hit game overall), including this bases-clearing double in the top of the 5th:

The big question, however, is the strikeout rate, right?

Even when Wisdom was single-handedly pushing off the Cubs tailspin with his performance at the end of May and beginning of June (en route to winning NL Rookie of the Month honors) he was striking out a pace that would make 2014 Javy Baez blush. The home run rate and overall production was legitimately impressive, but he just was never going to succeed at the big league level over a prolonged period of time unless he stopped striking out so dang much. 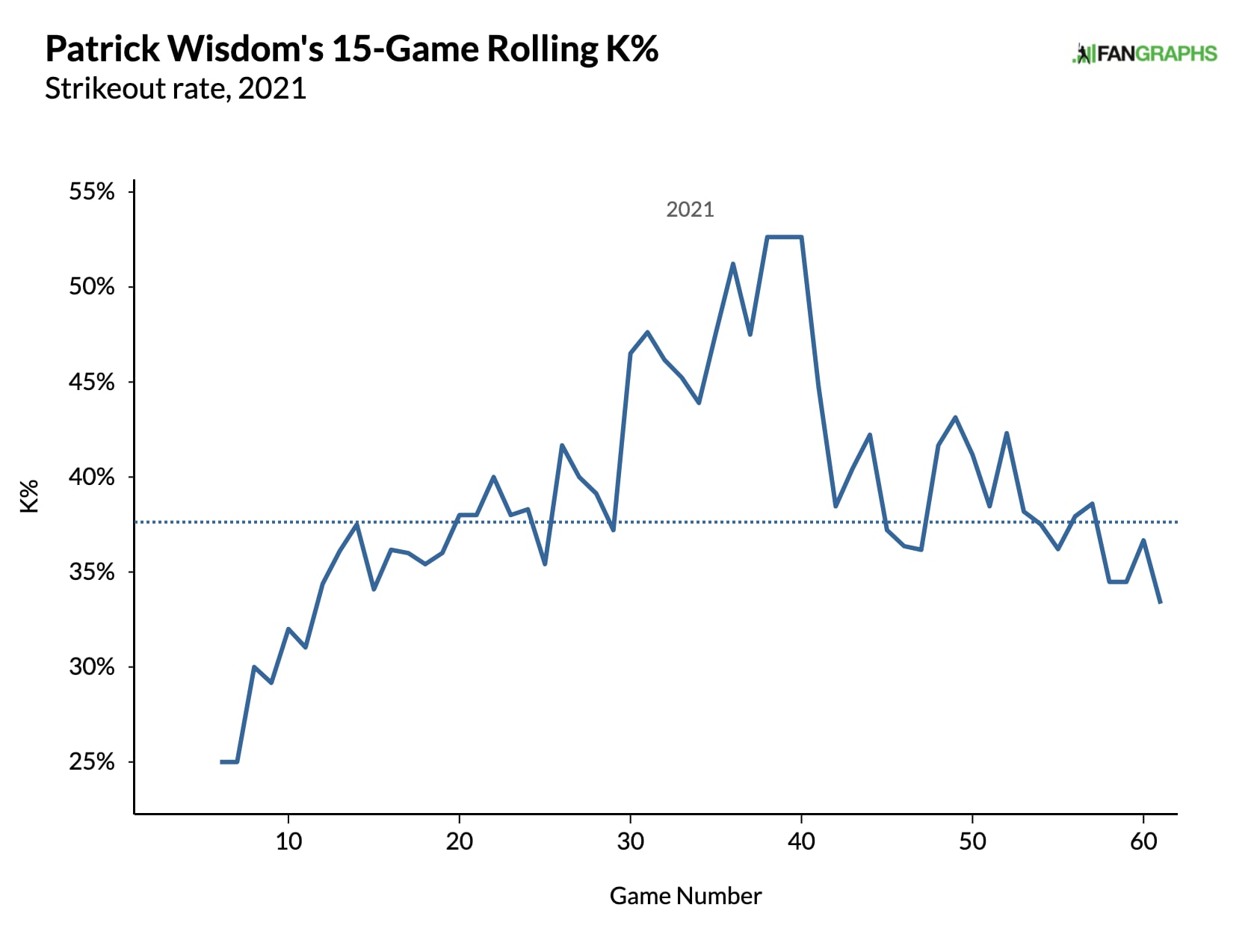 Now, it’s important to point out our (left-hand) Y-axis here — that strikeout rate is still quite high — but the relative trend is a shining beacon of development. A beacon that holds up under further scrutiny.

Generally speaking, there are two fundamental components to a player’s strikeout rate: Pitch Recognition (Are you swinging at strikes and laying off balls?) and Contact (Are you getting the bat on the ball?). It’s more complicated than that, but we can boil it down to these basics. And for Wisdom, he’s made improvement on both counts.

For the season, Patrick Wisdom has swung at 34% of pitches out of the strikezone, which ranks 194th in MLB among players with at least 190 PAs. His 75.6% swing rate on pitches in the zone (41st in MLB) is much better relative to the league, but seems to be mostly a byproduct of just swinging a lot. Point being … yikes.

Well, he’s made some dramatic improvements as the season has gone on.

Long story short, he’s swinging at fewer pitches out of the zone (left) and more pitches in the zone (right). So the story on pitch recognition? He’s handling it. He’s developing. And that, alone, is big indicator that the reduction to his strikeout rate isn’t entirely smoke and mirrors.

But it’s also only half the battle. Knowing which pitches to swing at is a start, but making contact with those pitches is a pretty big next step. And for Wisdom, that’s been a huge HUGE problem overall.

For the season, Patrick Wisdom’s contact rate on pitches in the strikezone is just 71.8%, which is the 5th worst mark in MLB among all players with at least 190 PAs. And his 18.2% overall whiff rate is also 5th worst in that group. The prodigious power is great and all, but that’s too high a price to pay.

Fortunately, Wisdom is taking strides on this end, too!

So the cliff notes here? Patrick Wisdom began his season by hitting everything in sight … while also striking out a TON. Then … he was just striking out a ton. But over the last few weeks, his production has trickled back up to that very impressive range AND he’s doing it without as many Ks after making legitimately useful changes to his approach and presence at the plate. There’s still work to be done, no doubt about it, but based on his improved pitch recognition and contact skills, there’s also reason to believe this isn’t a mirage.

But what does it all mean? Well. A lot.

For one, Wisdom is a legitimate Rookie of the Year candidate. As of this moment, his .278/.342/.585 (144 wRC+) slash line leads all NL Rookies and trails only Jake Fraley (145 wRC+) in the American League. His 16 Homers also leads all NL Rookies and ranks 5th among all rookies in MLB. On top of that, his defense at third base has been extremely impressive (that arm is a rocket), but he’s also doing the versatility thing, logging innings at 3B, 1B, LF, and RF.

For another, he may just be turning himself into a projected everyday starter on the 2022 Chicago Cubs. The Cubs lost a lot of power at the deadline (Anthony Rizzo, Kris Bryant, Javier Baez) so they’re going to need a guy like Wisdom to hit some balls over the fence. And with the Cubs pivot towards extreme contact bats like Nick Madrigal and Nico Hoerner, they can probably afford a little extra strikeout stuff, especially if it comes with this level of overall production.

And remember, Wisdom isn’t even arbitration eligible until 2024 or a free agent until 2027. If he is actually turning himself into an everyday starter, the Cubs will have a really nice new core of affordable players to build around on the positional side as soon as next season (Hoerner, Madrigal, Wisdom … Willson Contreras? Brennen Davis? Etc.). There’s still a ways to go, but this one of the most exciting things to watch over the final two months of the season. Let’s hope he can keep it up.