Schwindel and Castellanos, Tough Injury for the Giants, Streaming News, and Other Cubs Bullets Skip to content 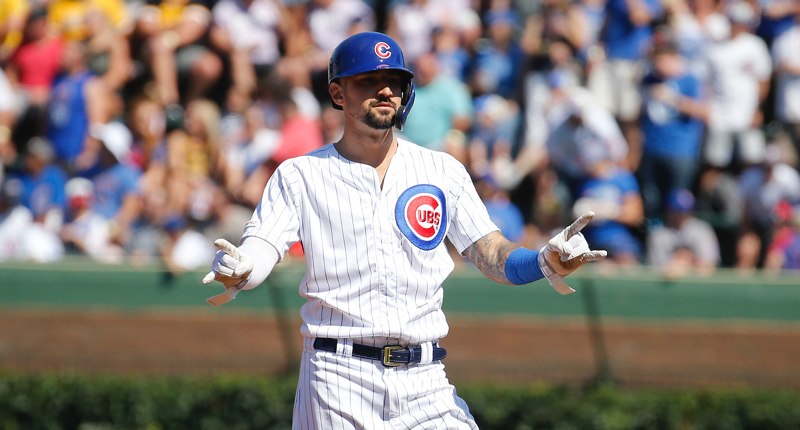 The residual Bears stuff from Sunday’s historically bad showing is really piling up. I don’t understand how certain folks at the top of the org survive the last few years, much less this year, specifically. If they wreck this opportunity with Justin Fields, I swear. I just keep thinking about how set up to fail he was and it makes me angrier and angrier.

•   Nice work from Frank Schwindel. I mean, when you’re up there with Nick Castellanos:

•   In all seriousness, one thing this really underscores is just how nuts Castellanos’s time was with the Cubs (if the image is cut off on your screen, the guy had 37(!) extra-base hits in his first 50 Cubs games; Schwindel is second, with 30; Andre Dawson had 29 in his MVP season in 1987). One of the best hitting stretches in a Cubs uniform we’ve ever seen, and Castellanos used it as a springboard to becoming the kind of hitter folks always thought he could be. (Something something get him back this offseason so these two can play together … )

•   The interesting thing about these two guys showing up together is that I’ve often thought about their style as hitters being interestingly similar – a lot of line drive contact, a lot of early swings, relatively all-fields, not a lot of walks, not a lot of strikeouts, etc. Castellanos has a long track record of success and hits a load more line drives. So I don’t really want to compare them in that way. Just talking styles here, and for all the reasons we wanted Castellanos in the lineup, you like having a Schwindel-type in the lineup, too. High-contact guys with power are relatively rare, and although you’d of course dream on having a guy like that who ALSO worked deep counts and took a lot of walks, those are the truly elite guys. Schwindel’s power and BABIP are certain to come down, but his style has been his style for his entire career. I’m happy he’s likely to get a shot to lock down first base next year (with Alfonso Rivas maybe sliding in and out), even if you enter into that knowing he isn’t going to be *THIS* guy the whole time (or even a Castellanos proxy).

•   Tough blow for the Giants at the worst possible time:

Giants say Brandon Belt had an X-ray today that revealed a fracture in his left thumb. Belt will continue to meet with doctors over the next couple of days to develop a recovery plan and timetable for his return.

•   Like so many other veteran Giants hitters, Belt was raking this year, and particularly over the last month. The Giants certainly have the players to cover the loss, but it’s a guy who will be unavailable for their optimized lineups for a while (and if he returns in the postseason, will he be impacted by lingering effects?). The Giants currently have a 2.0-game lead over the Dodgers for the NL West (and best NL record). Given the difference between winning the division and getting a one-game Wild Card playoff game, that race is huge. Working to the Giants’ benefit, they finish the season by hosting the Diamondbacks and Padres. The Dodgers, meanwhile, host the Padres and then the Brewers (who won’t have anything concrete to play for at that point, but are still better than the Diamondbacks).

•   Absolutely incredible that this isn’t the Cubs:

I have seen this statistic in several places today, and there is no better summation of the 2021 Mets:

No team in Major League history has spent as much time (103 days) in first place and finished with a losing record. The Mets are mathematically guaranteed to become the first.

Who's your pick for the National League Cy Young Award?

Walter Ford, a two-way player and one of Baseball America’s top 10 prospects in the 2023 HS class, is reclassifying for the 2022 MLB draft.https://t.co/OnStODPwaz

•   Potentially major news here for Chicago sports, as NBC Sports Chicago was one of the few RSNs carried by YouTubeTV:

NBC and YouTube TV are in the midst of a carriage dispute, with their current agreement ending on Thursday. If NBC's networks get pulled, YTTV will cut its monthly price by $10/month until they returnhttps://t.co/lvIkX1yEay

•   The reality is that even if a carriage deal is reached (and it will be eventually, given NBC’s stable of channels), it’s possible Google’s YouTubeTV still drops the NBC RSNs. As we saw the last two years with the FOX/Sinclair RSNs, and the standalones like Marquee and YES, YouTubeTV (and Hulu) just seem to be getting out of the RSN business. It’s viewed as too pricey for them, which makes sense given that the vast majority of their customers see themselves as “cord-cutters” trying to avoid big bundled up packages of channels in the first place (I’d argue that if you’re getting a live TV service from a streamer, you’re not REALLY cord-cutting, you’re just getting it from a different kind of cord, but that’s neither here nor there (for now, because eventually that *IS* going to become part of the story of the long-term transformation of sports content delivery)*). That is all to say, if you’ve got YouTubeTV and you watch a lot of Bulls or Blackhawks or White Sox, you are gonna want to follow the story closely this week.

•   *(OK, fine, I’ll do a side note on that whole thing: reportedly, one of the beefs between Google and NBC? The latter is asking that Google REQUIRE a Peacock subscription as part of the YouTubeTV package. I guess if you have leverage, you try, but I also can see why Google is balking – its users would, in a number of ways, be paying twice for the same content. Here’s the thing, though: isn’t that just the same thing as the old school problem with carriage deals on traditional cable plans? Like, providers who say “OK, you want our local channels in your package, fine, but you also have to take our sports channels.” That is to say, these are all just the same old issues as ever – content providers wanting to be paid by people who may not actually want some of that content – being manifest in a new medium.)

•   Tablets, clothes, steamers, flashlights, and more are your Deals of the Day at Amazon. #ad

•   Camp getting underway for the Bulls and Blackhawks:

Arturas Karnisovas and Billy Donovan Know Their Team Still Has Everything to Provehttps://t.co/qZoFeMXk2J