I planned to get to this series of rumors much earlier today, but the onslaught of Blackhawks news took up too much time. In case you missed it, Blackhawks President/GM Stan Bowman has resigned from his position due to his complicity in effectively covering up sexual abuse allegations back in 2010. Sexual abuse allegations made BY a player ABOUT a coach. It’s really an awful story if you haven’t been following along.

Now that I’m back in this mode, here are some rumors from around the baseball world …

Free agency hasn’t even begun, but we’ve already seen (1) Buster Olney (ESPN) include the Cubs among the teams doing their homework on the elite shortstop free agent market, (2) Mark Feinsand (MLB.com) call the Cubs a “likely suitor” for SS Trevor Story, and (3) Jon Heyman make a prediction that Javier Báez would return to the Cubs.

And while today’s update is from that same man, Heyman, he does expand on it a bit. It comes across as mostly speculation, but I thought you’d want to see it nonetheless – I mean he puts it so bluntly: “I think the Cubs are going to get him back,” Heyman said on his Big Time Baseball podcast.

Heyman continues by explaining that the Cubs and Báez were “very close to a deal” before the pandemic hit for something around $160 million or “maybe a little more than that.” And adds that he thinks that’s about what it’ll take to get him back (and there have been other rumors suggesting the same range).

Man, that strong offensive end to the season really did wonders for Báez, eh? A $160M+ deal was *not* looking likely at the All-Star break.

Heyman hedges his bet later on, pointing out that the Cubs need more pitching than hitting, which, sure, no disagreements here, but does think Báez is the most likely of the three big Cubs (along with Anthony Rizzo and Kris Bryant) to return. We’ll see.

For what it’s worth, I think Báez at $160M+ is not going to be something the Cubs do, especially if it’s on a five or six-year deal, but perhaps they can be that one team that offers him the unique, short-term deal (like 3 years, with $30M+ a year?). He’s not likely “worth” that much in AAV, so it would be an overpay in one sense, but the Cubs have next to no money committed over these next couple years and THEN Jason Heyward’s contract comes off the books after 2023. They could manage it for Báez, and, of course, the AAV premium buys them some future flexibility, when they should need it more than now. And, of course, with a glaring need for power *and* a huge vacancy at shortstop, you can do a whole lot worse than Báez for three years.

With that said, I’d probably be even happier with a SUPER short-term deal (1 year) for him or one of the other shortstops (maybe Trevor Story can be convinced, though he’ll come attached to draft pick compensation, which makes a short-term deal more difficult?), if they’re looking to reclaim some value before going big (with less shortstop competition) next winter.

Michael Conforto had a rough walk season with the Mets, but with his track record of offensive success – and at just 28 years old – Conforto is expected to receive and then reject the qualifying offer of $18.4M, making him a free agent attached to draft pick compensation.

Setting aside the draft pick compensation question for a moment, I kind of love Conforto as a potential Cubs target, because he sure seems like someone for whom you could buy low on a short-term deal. (Although, to be honest, a one-year, $18.4M deal to reestablish value doesn’t seem like the worst outcome for him all things considered, but he and his agent, Scott Boras, must be confident he can get more/plenty right away.)

In any case, Tim Britton uses some recent free agent outfield comps to come up with a projected contract for Conforto, landing on the Dexter Fowler deal (+ some inflation) as the basis. Ultimately, he projects four years, and $70M ($17.5M) for Conforto, which is enough to reject the qualifying offer, but still small enough for buyers to get interested. I would be perfectly comfortable with that level of dollars and years for the Cubs, even at this moment in the competitive cycle. 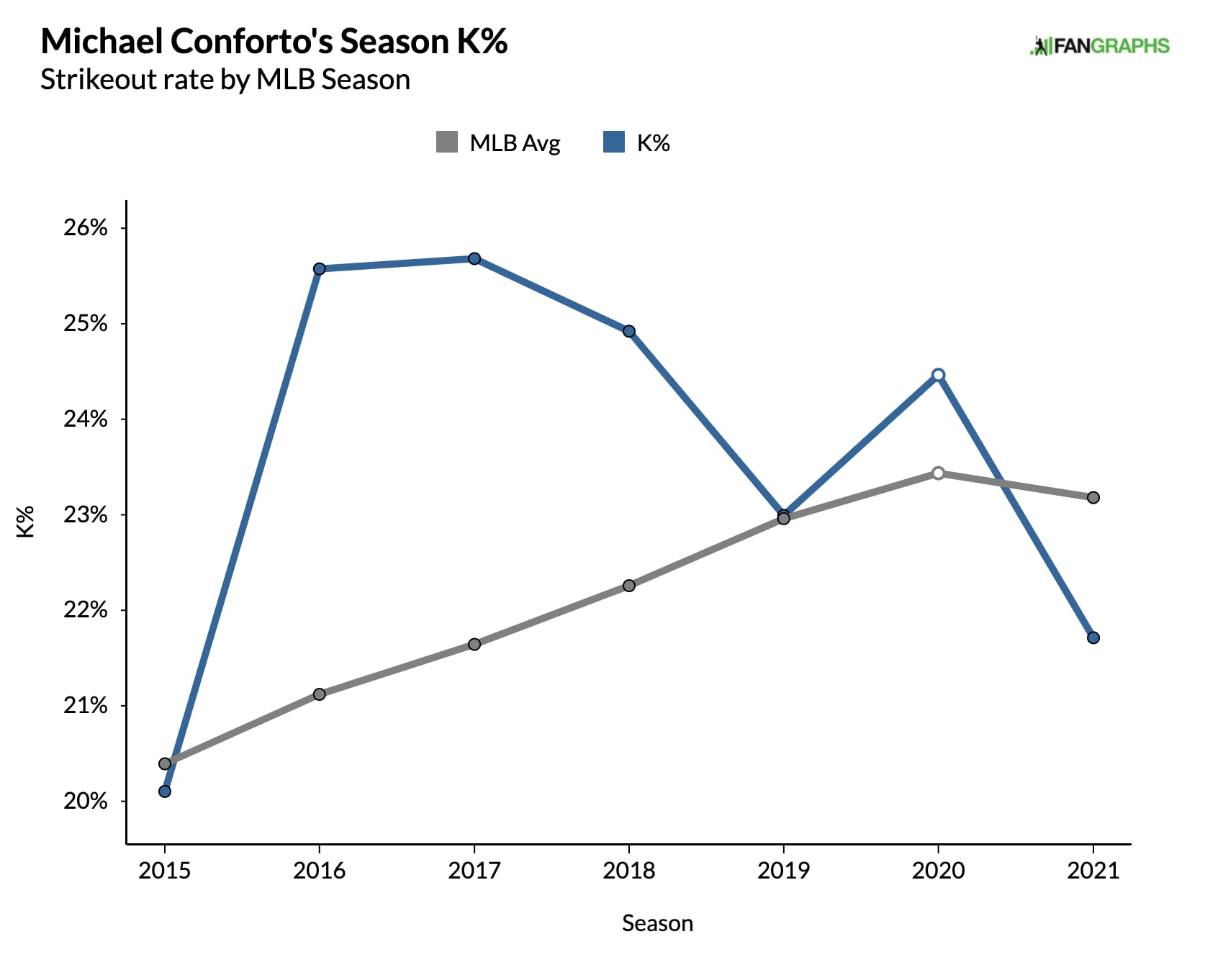 I haven’t dug all the way into his down 2021 season yet (though maybe we can tackle that in a standalone post), but there seems to be enough here to gamble when you consider the history and the age.

If the Mets ever land a new baseball president, he’ll enter a very difficult position.

According to Danny Abriano’s back-of-the-napkin math, the Mets payroll will sit around $170M after expected arbitration raises, and qualifying offers for Michael Conforto or Noah Syndergaard could immediately take them up to the 2021 luxury tax level. Of course, there’s also the matter of trying to re-sign Marcus Stroman and Javy Báez (perhaps early in the offseason?), and that’s all BEFORE they go looking for even one single external free agent addition. Needless to say, they’re up against it.

But with guys like Francisco Lindor and Jacob deGrom in their prime, the Mets have as much of a reason to spend as any team out there. And that’s just what Abriano is imploring them to do this offseason, luxury tax be dammed (man this all sounds *exactly* like our discussions about the Cubs from 2018-2021). All that said, I have a feeling that the Mets may be one of the teams most beholden to the rules of the new CBA. With so much payroll already committed, so many outgoing players, but still an expectation of short-term competitiveness, they’ll have to make some tough calls if the rules don’t change in a significant way.

"Exceeding the luxury tax should not be an issue for the Mets. And it can be argued that it is the prudent thing for them to do right now."

Here's why the Mets need to exceed the luxury tax for the 2022 season (via @DannyAbriano) https://t.co/Jf1EGyuPbw pic.twitter.com/Trp47pWEKG

The Cleveland Guardians are expected to attempt an extension for their star (and still underrated) third baseman José Ramírez, 29, but the Francisco Lindor trajectory sure makes it seem unlikely. The Indians have never paid a player more than $18.7M/year (Edwin Encarnacion back in 2018) and have never given out a greater overall total than $60M. But Ramirez would very likely demand much more than that – and rightfully so, even if he does want to stay in Cleveland, as reported, and even if the feeling is mutual.

Long story short, the soon-to-be-Guardians will try to extend him, but if it fails, they’ll try to trade him.

A José Ramírez contract extension makes tons of sense for a team aiming to sell Guardians merchandise and return to contention. History, however, casts doubt upon its likelihood.

The ins & outs of a potential deal, what each side wants & the path forward:https://t.co/AYB1O8OPBS

•   Kevin Goldstein did the chat thing again, noting that he does not believe the Cubs will “play at the top of the market” when it comes to starting pitching, preferring instead “just solid guys to give them innings and maybe be trade targets down the line.” Yuck. He also does not see the Cubs even *trying* to re-sign any of Javy Báez, Anthony Rizzo, or Kris Bryant.

Joe: What do you think the cubs do this off-season ?

Kevin Goldstein: Getting this question a TON. I don’t think it will be super exciting. More playing in the margins and shoring things up.

•  I don’t know how many times I’ll try to kick the football just before Lucy pulls it out at the last second, but I just don’t see how the Cubs offseason can possibly be any less exciting than the last few. By virtue of raw spending capacity, alone, plus the fact that they do have to have 26 baseball players on the roster, it should be a better winter than recent memory. Maybe we’re just saying that because we know, by comparison, how dry the last few have been for the Cubs (which is different than saying the Cubs will have an exciting offseason in the abstract).

Where will these top 16 free agents wind up (including Bryant, Castellanos, Kershaw, Ray, Schwarber, Baez, Correa, Verlander, Scherzer)? The World Series analyzed by @Decker6 and me. Why doesn’t Dusty have a deal? And should he be in the Hall? https://t.co/jwl5liNTUN