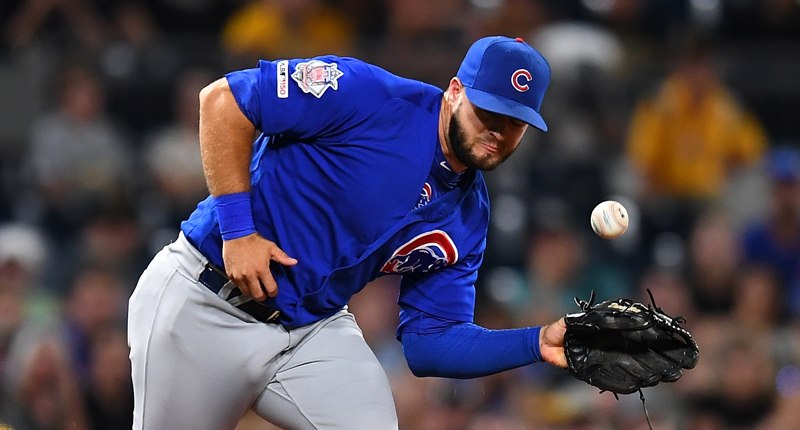 The Family has been trying to impose Christmas music upon me already this week. No. I will not abide. It is November 10. I cannot be stuck listening to ‘Sleigh Ride’ for an 8700th time come December 25. I will barely survive the 8600 times I hear it in December.

•   David Bote’s separated shoulder – and whatever damage came from it – ultimately did require surgery. It just didn’t come until about five months later, when he had it only recently, according to Jed Hoyer. Bote, who originally suffered the separation on May 29, was able to return to the Cubs on July 25, but hit just .197/.273/.320 (60 wRC+) the rest of the way. He wasn’t much better before the injury (.201/.280/.340, 68), but he was making much harder and better contact before the injury. Looking back, it’s highly likely he was never quite right after the injury. Since it’s not always a precise thing – when surgery is required, when rehab is enough – and since you pretty much always try to avoid shoulder surgery whenever possible, I don’t think folks should get too frazzled by the fact that he didn’t have the surgery earlier. It may simply not have been clear that it was necessary until after the season ended, he took time off, and maybe then when he started swinging again (or something), everyone decided it was time.

•   There’s no timeline offered on his recovery, and I can’t speculate without knowing precisely what the surgery was (and even then, I’d just be playing Dr. Google). It’s Bote’s non-throwing shoulder, which could help, but the reality is shoulder surgery takes a long time to get right from. It’s very hard to see Bote being ready for a normal Spring Training, which means his start to the season is highly likely to be delayed.

•   Bote, 28, figured to be back in a rotational bench role, with more at bats available next year with the DH arriving in the NL (probably). There’s always been enough upside in that bat to justify a bench job, but who knows how this proceeds now. He may never have reached that upside in any case (things certainly weren’t trending well the last few years), but this surgery isn’t going to help. Bote, one of the rare extensions from the last few years, is owed $2.5 million in 2022, $4 million in 2023, and $5.5 million in 2024. Sure would be nice if he still emerges as a solid bench player, given the commitment that’s already on the books. But 2022 was probably already going to be pivotal for him, and now he might start behind the eight ball. In any case, hopefully he has a speedy and complete recovery, and is in a good place to provide some value off the bench at some point next season.

•   Todd Johnson writes about the full slate of AFL performances so far for the Cubs, and what they could mean for each prospect’s future with the Cubs. You probably know the great stories by now (Nelson Velazquez, Andy Weber, Caleb Kilian), and about how the Cubs have been tinkering with Ryan Jensen’s pitches/approach (with ugly results). But the real stinger is Brendon Little still not resurfacing after his early-AFL appearance where he departed with the trainer. Minor league injuries are notoriously secretive, so we don’t yet have a sense what’s going on. The timing is terrible for Little, who was in the AFL to show his breakout in relief this past year at Double-A and Triple-A was legit enough to earn him a spot on the 40-man roster. The 2017 first rounder is Rule 5 eligible this year, so it was a big decision time for the Cubs. Of course, if he’s injured, that might end the conversation before it begins – I doubt he gets drafted if there are any health questions – and he’d just have to try to earn a big league job next year with the Cubs whenever he’s healthy.

•   Speaking of Velazquez, yes, he did it again:

Holy hell. What an impressive at bat from Nelson Velazquez. Got a FB inside with two strikes from Roansy Contreras and absolutely obliterated it. Pulled the hands in and kept it fair about 400 feet down the left field line. #Cubs

•   And speaking of Weber, more context for how different his AFL season has been than his regular season:

•   And just to complete the trifecta of love for the three guys who’ve been owning the AFL:

Cubs prospects have been playing well in Arizona, including Caleb Kilian whose strong outing on Monday made him our Pitcher of the Day in today's update. #Cubs https://t.co/shd0ZcP0MN

•   The one and only Joc Pederson:

"The best style of baseball you want people to play is their own."

Frank Schwindel was only the 3rd rookie in the past 10 seasons with 40+ hits in September 🤯 pic.twitter.com/vwTooCebEZ

•   Of course the league has no issue:

You Just Hate to See It: NBA Executives Bash the Lakers for Letting Alex Caruso Walkhttps://t.co/ON3dhoh05m

•   The Blackhawks actually won a second in a row: