Breaking Down the Big Free Agent Shortstops - How Do They Stack Up? Skip to content 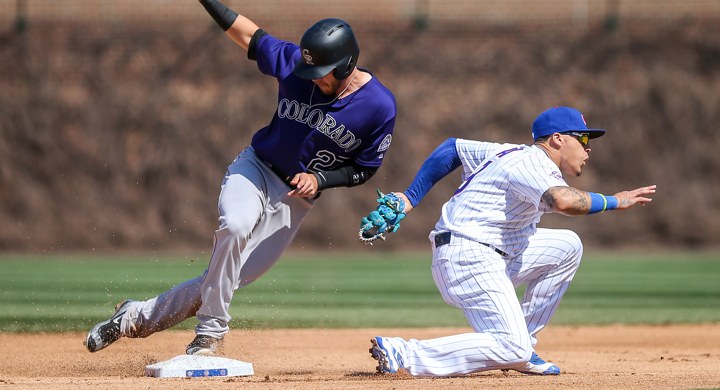 Although we’ve had some free agent classes with a little more star power up top over the years, this winter’s crop is as talented and deep as you can reasonably expect.

And a huge part of that is the big five free agent shortstops, all hitting the market at the same time: Carlos Correa, Corey Seager, Trevor Story, Javy Báez, and Marcus Semien. Together, the five of them project to earn somewhere between $750M and $1 billion (depending on which projections you prefer), transforming the market along the way.

And considering the fact that the Cubs have reportedly been doing their homework on the entire group, and have already been loosely connected to Corey Seager (x2), Javy Báez, and Trevor Story, I thought you’d find this breakdown from Mike Petriello at MLB.com particularly useful and enjoyable: Breaking down the ‘Big 5’ FA shortstops.

Petriello breaks down the entire group with a ranking and discussion of age, health, defense, offense, abilities versus the elite fastball, running speed, and 2022 projections.

And while some of it is the perfect example of life imagining itself as a comedian — the ranking of age from youngest to oldest (Correa, Seager, Story, Báez, Semien) is almost the exact mirror of health from most games played over the last four seasons to least (Semien, Story, Báez, Correa, Seager*) — there really is a lot of useful insight.

*(It is important to note that Seager was slowed by Tommy John surgery (not usually a chronic issue for position players) and being hit in the hand with a pitch (totally flukey). With a couple of fresh connections between the Cubs and him, that felt worth bringing up one more time.)

Some other key points arrive when you get to defense. Carlos Correa rates out as – by far – the best defensive shortstop of the bunch looking back on 2021 Outs Above Average. Corey Seager, by contrast, is probably moving to third base long-term. In a vacuum, that would carve out a nice valley between their two guarantees, but hold that thought.

In the middle, there are a lot of tricky defensive considerations to sort out. Marcus Semien rates out fine (or a little worse) at short … and just won the Gold Glove at second. Trevor Story was a top-ten defensive shortstops from 2016-2020, but fell way off in 2021, after injuring his elbow. And Javy Báez had an unexpectedly fine 2020 and 2021 defensively after an absolutely monster defensive season in 2019. Having watched just about every Báez-at-shortstop game over the last six+ years, I wouldn’t have any concerns about him at the position, but I’d also wager he’s not the guy he was a few years ago moving forward. That feels fair.

Offensively, there’s a really good conversation in there that I don’t want to spoil too much, so check it out for yourself (or suffice it to say, Seager is the best hitter, Carlos Correa is right behind him, then there’s a gap before everyone else). But either way, the conversation becomes more interesting when you get to success against the elite fastball, which has been the Cubs’ kryptonite since about 2018.

And, well, that certainly tracks, given one former Cubs’ spot on these lists:

The ranking is unchanged over the last three years, and there’s a decent amount of year-to-year consistency for Correa, Semien and Story, though Seager and especially Báez took a big step back in 2021. Again, Semien, Correa and Seager are the top three, with Story and Báez somewhat behind.

What about production against velocity over the last three years? OPS isn’t really a perfect metric for this, as it’s not park-adjusted and we do have a Rockie, but it’s easily understandable and it tells a story here.

If you’re looking to combat elite fastball velocity, Báez and Correa are not necessarily the way to go. And, in fact, I do wonder if something about this particular skillset is what’s leading the Cubs’ theoretical interest in Seager. If you think the game is only going to feature more higher-velo fastballs, a 27-year-old slugger who excels against them could be worth the investment – especially if you believe the injuries are more flukey than chronic.

There’s so much more in there, including a really interesting discussion on the 2022 projections, which are probably way too unfair for Javy Báez (is he going to need to take a one-year offer this winter?) so check it out. I still think the Cubs’ interest in signing one of these players is more opportunistic than definite, but, hey … it’s good to have an idea of their skills and weaknesses before shopping, right?

Much more in Petriello’s piece here. Enjoy mulling the options.