Wrigley Football Saturday is Here, a DFA'd Player to Go After, The Soriano Contract, Cubs Bullets Skip to content 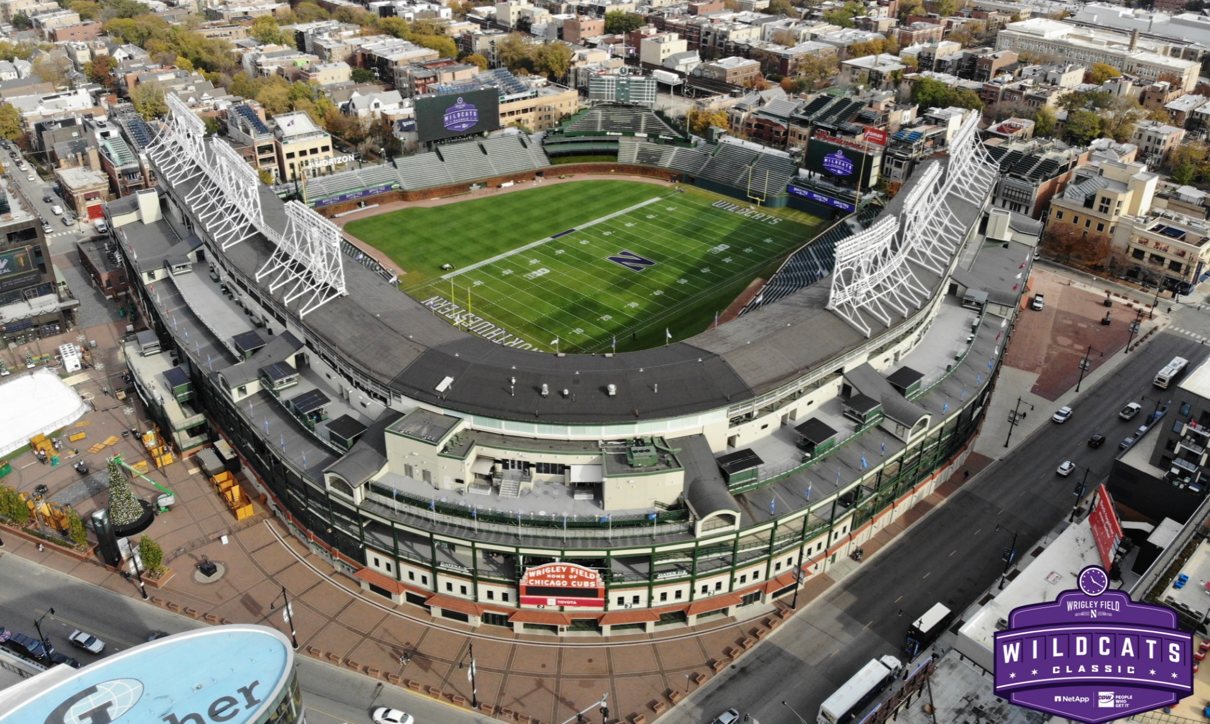 The Little Girl got me to leave the VERY EARLY Christmas music on the radio last night for a drive, and I’m pretty sure I’ve broken the seal now. There’s no putting those ‘Carol of Bells’ back in the toothpaste tube or whatever. Just play me the Taylor Swift version of ‘Last Christmas’ – the definitive version, not apologizing – and I’ll be good.

•   Wrigley Field is ready to host football again today, with Northwestern facing Purdue. Lotta cool touches, and it should be a great day for multiple working end zones and also college football fans:

Had to mix in some Purple 😈

•   Yesterday’s rostering deadline means there are now a whole lotta guys who’ve been left unprotected from the Rule 5 Draft around baseball, but more immediately, it also means there are now a whole lotta guys who’ve been DFA’d (to make room for protected prospects). I mean, the Guardians alone DFA’d seven players. It’s a good time to get grabby on the waiver wire if there is a guy you like, and the Cubs do have the 7th highest waiver position (you can trade for a guy if you don’t think he’ll reach you in the waiver order). I’d be surprised if the Cubs didn’t make an addition in the week ahead, even if only to then try to sneak that same guy through waivers later in the offseason.

•   To that end, a lefty outfield power bat, with minor league options remaining, who hasn’t ever really had a chance to step forward into the big leagues because of extreme crowding ahead of him? Sure sounds like outgoing Dodgers outfielder Zach Reks should be a Cubs target:

Please, Cubs, pounce on Zach Reks in waivers. I’ll admit I didn’t realize he’s already 28, but the guy is a player that’s been log jammed in an uber talented organization. If he’s available to you to pick up off of waivers, you’re getting a big leaguer with regular potential… pic.twitter.com/2TS5EYUwzC

•   Oh, and while I know he trended way down last year and maybe doesn’t merit a 40-man spot at this point, I hope the Cubs figure out a way to get back-up catcher Willians Astudillo after he was DFA’d by the Twins. The guy is just fun as heck to watch – LA TORTUGA! You can see all the DFA’s around baseball, and the other rostering moves, here at MLBTR.

•   15 years ago, the Cubs inked their (then) largest deal in franchise history, surprising folks by going all out for Alfonso Soriano:

The Cubs sign Alfonso Soriano to an 8-year, $136 million deal.

•   Soriano did exactly what you expect from a guy that age on a contract like that, playing very well early on, and then fading as he aged. That’s the deal with those kinds of contracts: you pay a lot of long-term money because that is what it takes to get the star player that you want right now. You just hope that (1) you get the most value out of the player in the early years, and (2) your team plays well while you have those best years going. For those Cubs, they made the postseason each of his first two seasons, and Soriano was worth 10.5 WAR across those two seasons. Basically, they got what they realistically should have expected. Even from there, Soriano was hardly useless, mostly posting solidly above-average numbers at the plate while improving his defense in left field. That contract was simply never the albatross that people made it out to be. I can think of much worse eight-year Cubs outfield contracts.

•   Speaking of Soriano, this year’s Heart and Hustle award winner comes with a couple Cubs-ish connections:

•   Soaps, shoes, home office, and more are among your Early Black Friday Deals at Amazon. #ad

•   Something to keep an eye on for next year, with unvaccinated pro athletes prohibited from entering Canada starting January 15:

The Cubs play three games in Toronto next season Aug. 29-31.

Cubs notably had COVID issues the final week of the season and struggled to reach the 85% vaccination threshold. https://t.co/T4dtcwBskZ

•   Don’t sleep on Nelson Maldonado’s bat – the only questions are about where he can play, and whether he’s healthy going into next year:

“I’ve had the chance to ask multiple minor leaguers who we, as fans/writers, aren’t talking enough about. Plenty of friends and roommates get tossed around, but the common name that always gets mentioned? Nelson Maldonado.”

Been so inundated with the trade deadline that I was left with a very full notebook for a post. First on Nelson Maldonado, one of the more fun watches in the Cubs system, but also: Made, Kohl, Nwogu, etc.https://t.co/Tdsx2KuF3Q

End your night with Shohei Ohtani's 5 longest homers of the season. pic.twitter.com/z831eqkrUZ

I nominate this Eric Karros 1993 card for worst ever result from a baseball card photoshoot. Although, he does enjoy “shooting hoops and weightlifting” in his spare time. #Cubs #Dodgers @BleacherNation @realcubsinsider pic.twitter.com/a1qDMFJzXT

The Cubs won the World Series so long ago, the team they beat doesn't even exist anymore.

LOOK WHERE HE TOOK OFF 😱